On 20 November last year, NBC News broke the news that Mark Zuckerberg, Donald Trump and a Facebook board member, Peter Thiel, had dined together at the White House the previous month

On 20 November last year, NBC News broke the news that Mark Zuckerberg, Donald Trump and a Facebook board member, Peter Thiel, had dined together at the White House the previous month. “It is unclear why the meeting was not made public or what Trump, Zuckerberg and Thiel discussed,” the report said.

That was it.
Nothing else has emerged since.
Not the date, not who arranged the menu, the venue, the seating, not the full guest list.
And not whether some kind of deal got done between two of the most powerful men in the world.

The news cycle moved on, and the dinner became one of the unsolved mysteries of American power.

But I was able to pry some of those details loose last week from White House officials along with current and former senior Facebook employees and people they speak to. Most said they would only talk on the condition their names not be used, since the company is not eager to call attention to Zuckerberg’s relationship with the president.

Their accounts painted a picture of an unusual gathering — something in between a high-stakes State dinner between the leaders of uneasily allied superpowers and the awkward rehearsal dinner before a marriage that has both families a little rattled.

Trump’s son-in-law, Jared Kushner, pulled together the dinner on 22 October on short notice after he learned that Zuckerberg, the Facebook founder, and his wife, Priscilla Chan, would be in Washington for a cryptocurrency hearing on Capitol Hill, a person familiar with the planning said. The dinner, the person said, took place in the Blue Room on the first floor of the White House. The guest list included Thiel, a Trump supporter, and his husband, Matt Danzeisen; Melania Trump; Kushner; and Ivanka Trump. The president, a person who has spoken to Zuckerberg said, did most of the talking. The atmosphere was convivial, another person who got an account of the dinner said. Trump likes billionaires and likes people who are useful to him, and Zuckerberg right now is both.

But looming over the private dinner is a question: Did Trump and Zuckerberg reach some kind of accommodation? Zuckerberg needs, and appears to be getting, a pass both on angry tweets from the president and the serious threats of lawsuits and regulation that face other big tech companies. Trump needs access to Facebook’s advertising platform and its viral power.

Both men are getting what they want, and it’s fair to wonder whether this is a mere alignment of interests or something more.

“I believe they have a deal,” said Roger McNamee, an early Facebook investor who is now a fierce critic, who added that it was “probably implied rather than explicit.”

“Mark’s deal with Trump is highly utilitarian,” he said. “It’s basically about getting free rein and protection from regulation. Trump needs Facebook’s thumb on the scale to win this election.”

Jesse Lehrich, the co-founder of Accountable Tech, a new nonprofit group pushing Facebook to tighten controls on its platform, suggested that the two men have a tacit nonaggression pact. “Trump can rage at Big Tech and Mark can say he’s disgusted by Trump’s posts, but at the end of the day the status quo serves both of their interests,” Lehrich said.

Officials at Facebook and in the administration scoff at the notion that there is some kind of secret pact. And it’s hard to imagine that anyone — certainly not Zuckerberg — would be dumb enough to make a secret deal with a president known for keeping neither secrets nor deals.

Trump and Zuckerberg had met just once before the dinner, an Oval Office encounter last September. Afterwards, the president boasted about his giant following on the platform. But October was a hot political month at Facebook: Zuckerberg was in an open battle with a leading Democratic presidential candidate, Senator Elizabeth Warren, who was threatening to break up Facebook and whom he called “an existential threat” to the company. The morning of their dinner, a top British official demanded answers on why Facebook would tolerate false political advertising.

Zuckerberg, a Facebook executive said, seems to view Trump as a peer. By contrast, he told amused top aides at one of his regular Monday meetings in March that Kushner was calling him so often about help with the administration’s coronavirus response that he couldn’t keep up, two people familiar with the meeting said. (“Mark does not think of himself as a peer to this president or any president,” a Facebook spokesman, Tucker Bounds, said, adding that Zuckerberg had initiated the conversation with Kushner about the coronavirus response.)

Zuckerberg has played the high-stakes and unpredictable politics of the Trump years as well as any other corporate executive. And a week before the dinner last October, he made clear in a speech that his interests and the president’s aligned: Zuckerberg would reject a growing movement to limit the false or inflammatory statements of the American president. 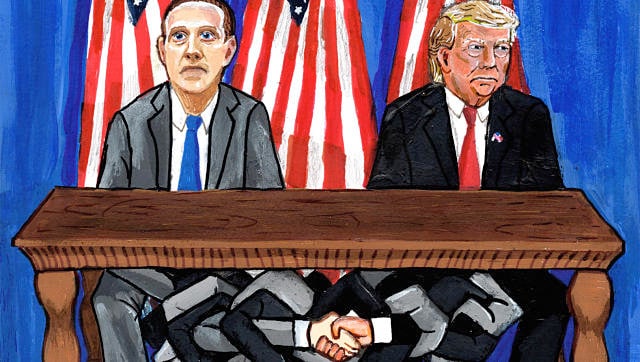 Mark Zuckerberg has forged an uneasy alliance with the Trump administration, and he may have gotten too close. By Brandon Celi © 2020 The New York Times

“I don’t think it’s right for a private company to censor politicians or the news in a democracy,” he said in the address at Georgetown University on 17 October. “We don’t do this to help politicians, but because we think people should be able to see for themselves what politicians are saying.”

Trump, for his part, has been notably softer on Facebook than on Amazon, Google, Twitter or Netflix at a moment when his regulatory apparatus often focuses on the political enemies he identifies in tweets.

Still Facebook, like other tech giants, finds itself in a political bind: Democrats hate and distrust them because they spread right-wing misinformation and helped elect Donald Trump; Republicans hate and distrust them because they’re run by California liberals and delete some right-wing speech. But Facebook has avoided that trap deftly over the last three and a half years, by moving faster and more earnestly than its competitors to mollify conservatives.

Facebook has always had a keener ear to the Right side of Washington than much of Silicon Valley, directed in part by Joel Kaplan, a Zuckerberg friend and former Bush administration official who is Facebook’s vice-president of global public policy. But it began focusing intently on winning over the conservative media in the spring of 2016, when Gizmodo alleged that the content moderation on the short-lived Trending Topics product on Facebook “suppressed conservative news.” A right-wing apparatus that had spent decades claiming bias in the media turned its sights on the tech giant. And Zuckerberg gave them the response they’d always hoped for — he shut down the product, welcomed his critics to meetings and signalled that he shared their concerns.

The next year, Trump continued to push the norms of truth and civility, and the social media platforms began reckoning with their broader misinformation and harassment problem. That set him on an inevitable — and to his supporters, welcome — collision course with the new gatekeepers. Trump’s dependence on Facebook as an advertising vehicle — he spent $44 million on the platform in 2016, and is expected to far exceed that this year — means that he needs the company as much as it needs him. And, as Mike Isaac, Sheera Frenkel, and Cecilia Kang reported in May, Zuckerberg increasingly embodies his company.

So Zuckerberg’s warm relationship with the president and his family is a victory for the company’s internal policy team led by Kaplan. But the company, people involved in its political strategy say, has been having an internal debate over balancing the reality of Republican control of regulatory agencies with the fact that Democrats are far more likely, in the long run, to actually push through new oversight or try to break up the company by forcing the sale of Instagram or WhatsApp. The balance, in the Trump years, has shifted right. Sheryl Sandberg, a leading Democrat and Zuckerberg’s powerful deputy, has seen her connections with Democrats fray as the company defies them and her power in the company fades as well.

Trump’s administration has reciprocated. The Justice Department is currently conducting antitrust investigations of the tech giants. But while Google and Amazon face “mature investigations,” the Facebook inquiry is “not real at all,” a person who has been briefed on the investigation said. And Facebook has acted like a company with no worries in Washington. It has continued to acquire companies, as Isaac reported last week, and moved to allow users to send messages between Messenger, WhatsApp and Instagram — a merging of the services that could further fuel monopoly concerns. (Facebook’s view is that it’s far less dominant in any market than the other big tech companies and has less to worry about than Google or Amazon.)

The summer of 2020 is one of those moments when corporate Washington starts to panic. What had looked like deft Trump-era politics now looks like exposure and risk. Top Democrats, including Joe Biden and Nancy Pelosi — who was infuriated when a distorted video of her went viral — have singled out Facebook as a bad actor. Trump is, at the moment, viewed by Washington’s insider class as likely to lose in November, though Biden poses less of a threat to Facebook than Warren would have.

While executives across Facebook insist that Zuckerberg’s position on free speech on the platform is a matter of long-term planning and principle, not political expediency, his political team also recognizes that they are badly out of position for a Democratic administration. And in recent days, Facebook has been eager to show its independence from the White House. The company has been unhesitatingly enforcing existing policy against Trump’s posts, and has been quick to point it out to the media, as it did last Thursday, when a Trump ad used a symbol associated with Nazi Germany.

Zuckerberg has not budged, however, on his core insistence that Trump should be able to say what he wants on the platform, and most of what he wants in ads — including false statements, as long as they aren’t misleading on specific, narrow topics, like the census. But he did reportedly tell Trump that he objected, personally, to Trump’s warning that “when the looting starts, the shooting starts.” And he and Chan wrote to scientists funded by their non-profit organisation that they were “deeply shaken and disgusted by [Trump’s] divisive and incendiary rhetoric.”

Those gestures may have appeased Facebook’s workforce, but they’ve gone largely unnoticed in Washington.

“All the big companies tacked to the right after Trump won, and Facebook probably moved farther than the others,” said Nu Wexler, a Democrat who worked in policy communications for Facebook in Washington. “But the politics of tech are changing, and companies should be worried about Democrats as well. The days of just keeping the president happy are over.”