As a response to the shooting at the YouTube headquarters in California, Google CEO Sundar Pichai and YouTube CEO Susan Wojcicki condemned the shooting and offered support to the YouTube employees and community. 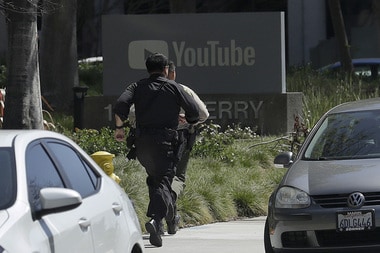 Police at the scene of the YouTube shooting/ AP

The shooting took place at the Google-owned YouTube's headquarters in San Bruno, California. It led to injuring three people, while the suspected shooter, a woman identified as content creator Nasim Aghdam, allegedly killed herself on the premise.

According to Aghdam who is supposed to be in her late thirties, YouTube filtered her channels to prevent them from getting more views. According to a post on a website identified as hers by San Francisco Chronicle, Aghdam claimed that there was no equal growth opportunity on YouTube or any other video sharing site.

US President Donald Trump expressed condolences to the victims and thanked the law enforcement agencies as well as the first responders for their efforts.

The attack led many tech CEOs such as Microsoft CEO Satya Nadella, Twitter's Jack Dorsey, Uber's Dara Khosrowshahi, and Apple's Tim Cook extend their support to the tech community and employees of the video sharing platform.

There are no words to describe the tragedy that occurred today. @SusanWojcicki & I are focused on supporting our employees & the @YouTube community through this difficult time together. Thank you to the police & first responders for their efforts, and to all for msgs of support.

There are no words to describe how horrible it was to have an active shooter @YouTube today. Our deepest gratitude to law enforcement & first responders for their rapid response. Our hearts go out to all those injured & impacted today. We will come together to heal as a family. — Susan Wojcicki (@SusanWojcicki) April 4, 2018

On behalf of all of Microsoft, our hearts are with everyone at YouTube and Google today and all those affected. https://t.co/dijMxGXGpD

We can’t keep being reactive to this, thinking and praying it won’t happen again at our schools, jobs, or our community spots. It’s beyond time to evolve our policies. This is a simple and reasonable approach, and it won’t solve all, but it’s a good start: https://t.co/ADYalbaO57 https://t.co/nbXpH9DDyT — jack (@jack) April 3, 2018

From everyone at Apple, we send our sympathy and support to the team at YouTube and Google, especially the victims and their families.

On behalf of the team at @Uber, sending support to everyone @YouTube and @Google, and gratitude to the heroic first responders. Another tragedy that should push us again to #EndGunViolence — dara khosrowshahi (@dkhos) April 3, 2018

Over the years, US has faced the problem of gun possession. Recently, after a series of gun shooting in the US, high school students began a 'March For Our Lives' campaign against rampant gun violence in the US.

YouTube had also received criticism for allowing videos related to weapons to be allowed on its platform. These included videos related to setting up weapons or modifying them. However, recently the video sharing platform banned such videos.