Former Obama advisers said they collected the data with their own app, complied with the social media platform's terms of service and received permission from supporters. An estimated 1 million Obama supporters gave the campaign access to their Facebook data. 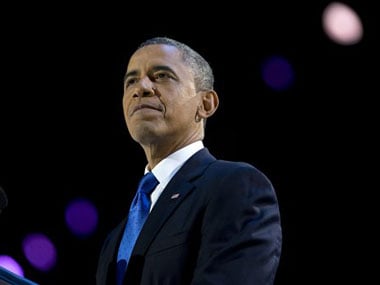 In most cases, Obama supporters who signed on to the campaign's mailing list were asked to authorise the campaign's Facebook app, allowing it to access certain aspects of their profile, including their posts, likes, photos, demographics and similar data from their Facebook friends.

The Obama data was used in voter turnout efforts, with a focus on young voters in key battleground states, and former campaign officials said the data was kept secure and not sold to or acquired from third parties.

Ex-Obama aides said their practices did not mirror those of Cambridge Analytica, which has been accused of acquiring personal data in unauthorised ways. The British political research firm has suspended CEO Alexander Nix pending an investigation.

"Cambridge Analytica obtained their data fraudulently, laundered through a researcher who paid people to install an app," Jim Messina, Obama's 2012 campaign manager, wrote on Twitter. Messina said the re-election campaign "told voters what they were sharing and for what purpose. Conflating these two cases is misleading."

Trump's campaign has said it didn't use Cambridge's data, and Cambridge has denied any wrongdoing. The incident has focused new attention on whether Facebook did enough to protect users' privacy and has prompted calls for Facebook's leadership to testify before Congress on how Cambridge harvested the data.

Carol Davidsen, who served as the Obama campaign's director of data integration and media analytics, tweeted Sunday that Facebook allowed the campaign to access the data "because they were on our side."

She said in a separate tweet that she had worked on all "data integration projects" at the campaign. "This was the only one that felt creepy, even though we played by the rules, and didn't do anything I felt was ugly, with the data," she wrote.

Rayid Ghani, who was chief scientist on the Obama 2012 campaign, wrote in a Medium post that it only contacted people who had provided them with access to their email address. "We did not get any contact information for their friend and did not (and could not) contact any of their friends directly," he wrote. He said the campaign "did not scrape everything available on facebook about everyone we could."

"All we could do was ask our 'primary' supporters to contact their friends and we would recommend who those friends were based on the data they allowed us to access," Ghani said. Facebook "did not look the other way, because they did not need to," he added.

Facebook officials did not immediately respond to a request for comment. The tech giant in 2015 began preventing app developers from syphoning off the data of Facebook users who volunteered access to the information of their friends.