Sriharikota: The Indian Space Research Organisation (ISRO) on Sunday successfully launched into space the NovaSAR and S1-4 earth observation satellites made in the UK from the spaceport in Sriharikota and successfully placed them in the designated orbit. 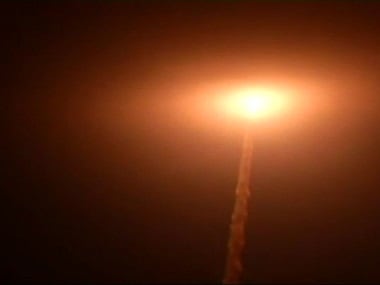 In a night launch, the workhorse PSLV-C42 launch vehicle blasted off from the first launchpad at the Satish Dhawan Space Centre at 10.08 pm. It was a perfect lift-off, ISRO officials said.

The PSLV injected the satellites into orbit 17 minutes and 45 seconds after lift off and placed them in a sun synchronous orbit 583 kilometres from the earth.

ISRO chairman K Sivan said the mission was a success and congratulated the scientists. "Today, I am extremely happy to announce that PSLV-C42, carrying two customer satellites NovaSAR and S1-4, placed them precisely in orbit. Within the next six months, 10 satellite missions and eight launch vehicle missions will be launched, one every two weeks," he said

ISRO's moon mission will be launched on 3 January, 2019, Sivan added.

The two satellites of UK-based Surrey Satellite Technologies Ltd (SSTL), both weighing 889 kilogrammes, were launched as per a commercial arrangement between the company and ISRO's commercial wing, Antrix Corporation Ltd.

ISRO had successfully carried out a similar night launch in 2015 and placed five satellites belonging to SSTL.