Why U Sports bet big on eSports by starting U Cypher, India's first multi-platform, multi-game championship

eSports, which was previously stereotyped as a hobby for the reclusive and socially awkward, is now being considered for inclusion on sports’ biggest and most revered stages — the Asian Games and the Olympics.

If you open a dictionary and look up the meaning of sport, you’ll see that it means “an activity involving physical exertion and skill in which an individual or team competes against another or others for entertainment.”

For some time, the term eSports was purely aspirational, more an expression of the desire for competitive video gaming than a reflection of any actual reality. But now, no longer can we keep eSports out of the circle of traditionally accepted sports.

That is why we as U Sports state: What chess has been to mankind from the sixth century, eSports will be to the generation now and the ones following. The U Cypher set. The league has six teams, with 14 members in each team, competing for a total prize pool of Rs 51 lakh

What has in the past been stereotyped as a hobby for the reclusive, and socially awkward, is now being considered for inclusion on sports’ biggest and most revered stages — the Asian Games and the Olympics. It has also become a medal event at the 2022 Asian Games, a sign that mainstream recognition is growing.

Because of technology, our communities are connected. With internet speeds of 50mpbs and upwards available in all major cities, there is a noticeable shift to online gaming. This paradigm shift in technology is changing the landscape of gaming in India as well. With 264 million gamers having spent $818 million in 2017, in India, it is the 17th largest games market. Though in its nascent stage, eSports in India is now heating up. eSports has made its foray in India with U Cypher, India’s first ever multi-platform, multi-game eSports Championship, which launched this January.

Globally, the eSports gaming market is estimated to be over $500-600 million with over 2,000 teams consistently participating in tournaments. ‘Counter-Strike’ and ‘DOTA 2’ have seen about 20 million downloads each, in India. If you look at ‘Steam’, which is a global platform, it has close to 1.5 million users out of India. Additionally, between 1,00,000 and 1,50,000 people play on ‘Steam’ on a weekly basis. With close to three years of research and tracking multiple tournaments pan India, we just knew that India is ready, and we should explore this genre.

Traditionally most eSports events in India have been on ground and in the shadows. They’ve only focused on the heavy gamers. That’s where U Cypher stepped in trying to up the game. It focuses on bringing eSports to the non-gamers and expanding the universe across India. Even the format was meant to pique their interest while still being true to the heavy gamer and eSports globally.

U Cypher has six teams, with 14 members in each team, competing for Season 1’s total prize pool of Rs 51 lakh. The combat zone orbits around four games, namely Counter-Strike: GO and DOTA 2 on PC, Tekken 7 on PS4 and Real Cricket 2017 on mobile.

With the commencement of the first season this January, U Cypher, has already garnered interest and appreciation from not just eSports athletes but viewers also. It has garnered a significant inbound interest from metropolitans like Mumbai and Delhi, and even smaller cities like Guwahati, Srinagar, Pune, Lucknow, Jaipur, Indore and Ahmedabad. Now nearly 2,000 Indian online gaming teams are being sponsored by brands and other individuals!

U Cypher has changed the lives of 84 players who have now become recognisable faces on the streets. This is especially in the case of the six captains. More brands have started to take notice and chances are that in 2018, new brand entrants into the sector will be seen. This is important to build eSports and to take it to a larger platform than before and bring India at par with the international scene. 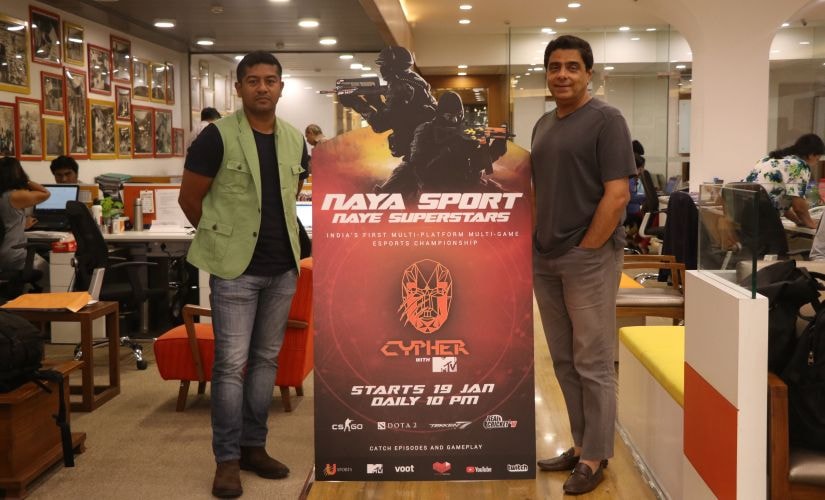 Supratik Sen and Ronnie Screwvala, the co-founders of U Sports, which has started U Cypher

But to take this sport to another level — we need broadcasters to see eSports content as an asset that can lure viewers back from their smartphones and PCs. And that was the idea, to bring it to television. The minute it comes to the most visual platform is when the game changes.

Again, eSports worldwide is an online streaming kind of phenomenon, and here is the first time this is changing. With U Cypher, we are bringing it on TV, and taking the long form gameplays and episodes to online platforms, both at the same time. We want to position it for everyone, especially the non-gamer, to be able to understand, watch and consume.

The appeal of watching eSports is much like regular sports — it’s the story that is there. One generation grew up kicking a ball in the backyard, the next grew up with choices that included games. We live in a digital culture that most people accept is redefining a whole range of things: sport is one of them.

With this championship, we want to spread awareness for this particular genre and position it as a sport. We want to get more, in fact, all eSports enthusiasts to open up to the thought of turning their hobby into a career. We aim to encourage more people to watch and engage in the sport and become one of the top markets for it.

Supratik Sen is the co-founder and CEO of U Sports