'What should we change?' is, I assume, the eternal question in the halls of 2K. This year, they made the wrong choice

NBA 2K has become the undisputed king of putting serious, respected actors in motion capture hijinks. But when they could’ve focused their energies on changing the setting, plot and painfully drawn out dialogue of MyCareer, what they chose to change was… the shot meter?

This strikes me as odd, because when it comes to making choices, NBA 2K has made some pretty great ones. If you’re buying the game year on year, you already know not to expect an overhaul and that’s because 2K seems to work on a maxim of refinement rather than charging out to fix what ain’t broke. I for one, like this about them. But this year, they seem to have broken their own rule.

So let’s focus in on two key choices made for NBA 2K21 that released early this month: The annual telling of the MyCareer tale and the brand new shot meter.

Let’s start with the story of Junior. The son of a college basketball hero who decides to follow in his father’s footsteps after a conversation with stranger…on a ferry. No seriously, that’s minute one of the storyline. The stranger, who turns out to be a high school basketball coach, is played by Djimon Honsou, and he convinces you that football (the American kind) is not your thing. You should play basketball instead. Like so...

And because we all change the course of our lives because of what a dude on a ferry tells us, you make the switch.

What follows is the exact same pattern that 2K career mode has followed since its inception.

This year’s cutscenes are particularly drawn out and the cause is the two parallel storylines. You have Junior, navigating life in the present day and Junior flashing back to a conversation with his deceased father. The father, played by Jesse Williams, becomes little more than an exposition dump for Junior’s issues, which by the way, are constantly hinted at in the present day and need no further explanation. Essentially, you’re watching your character’s origin story while playing his origin story.

It’s an entire plot point that is almost as skippable as David Aldridge.

Once you start playing high school ball, you meet Archie, an old friend of your father’s, who wants to be your future agent. Unfortunately, they cast this role with The Wire's Michael K Williams, which makes you distrust him from the absolute get-go.

But while Djimon Honsou’s plot as your high school coach fades away pointlessly, at least the Archie storyline leaves you with a choice that requires some actual decision-making.

And that’s what I wanted more of. Less ‘watching people talk to my character’ and more ‘doing things that affect my character’. NBA 2K21 tried to make this happen but the results were hilarious at best. One of the other big choices involves leaving college because your girlfriend is mad at you. But even that seemed realistic when compared to your choice of suit for the NBA Draft. 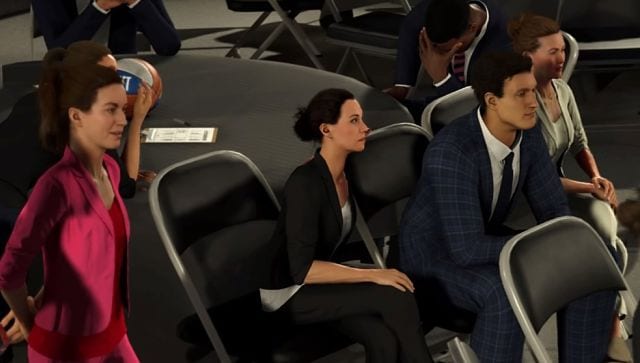 Before picking a suit, Archie and the salesperson at the store dutifully inform you that your choice of suit will define how you look going forward. But the result of picking an even slightly loud two button are disastrous.

Allow me to regale you with the consequences of dressing big for your big night. It’s like Russell Westbrook and Kanye West had a baby, that they both thought was a little… extra.

Of course, the build-up to draft night is always a bone of contention for 2K fans. I personally loved the combine build-up of NBA 2K20 and I felt like they had a gap for it. Interviews and press junkets just before draft night decide the last few inches of your draft stock. But the ‘right’ answers, even though you’re constantly told there are none, are painfully obvious. Swap that out with some long jumps and sprints and that draft build-up would’ve been on point.

Another way you can secure your final spot on the draft board is via a chance meeting with Zion Williamson. He challenges you to a game on a street court and honestly, this was the most fun of all the draft night proceedings. 2K is counting on you to be cocky and over-confident about your player and I was honestly expecting a gimme. But, Zion does what only a 20-year-old cover athlete of a major sports game franchise can, utterly obliterates you.

There goes the lottery…

Post-draft, there’s only one new plot point that creeps around in the background. Somehow, your team lands two lottery picks and decides to grab you and the #1 overall pick, who also plays, shockingly, in the exact same position as you. How has this GM not been fired? That aside, it’s the pretty much the usual. Agents are spoken to via text, sponsorships are signed and teammates (that #1 overall pick) are traded for next to no return.

MyCareer was crying out for an overhaul. Instead, we have a storyline that hits a lot of great notes, but they’re notes that have been hit at least twice before. I’m hoping next year brings some fundamental story changes and some serious editing on those cut scenes. Plot points like daddy issues, chips on shoulders and why a kid from New Jersey would dream of being a millionaire basketball superstar need little to no explanatory dialogue.

Instead, how about a MyCareer plot that starts in Europe? Paella for thought.

Now, let’s jump out of MyCareer and into gameplay for the second big choice of NBA 2K21.

Let me be utterly honest: NBA 2K is one of the most authentic sports sim experiences on the planet. So for me to criticise their gameplay choices is a bit like Loul Deng trash talking Dame Lillard.

But, when you’ve got the space, you gotta take the shot... which is impossible because of the comically difficult shot meter.

In fairness, 2K have released a patch, and that has made things easier, but on a purely conceptual level, this shot meter is insane. It completely changes you how you’ve used the pro stick in the past, not to mention how precise the green point is.

Even one of the greatest real-life jump shooters in the NBA, and this year’s cover star, felt a need to register a complaint.

Am I the only one struggling with this shot meter ? ‍♂️ and I ain’t made a free throw yet

It’s like the developer forgot that the only reason people play NBA 2K games is because they can’t actually play basketball. It’s a tough sport. If you don’t have the training, I wager that the odds of hitting a three-pointer in real life are next to impossible. That’s why we need the damn game.

Instead of making the shot meter more satisfying, they’ve made it so difficult that a man who routinely trash talks MVP candidates (and sends them home from the playoffs) thought he needed to tweet out his grievances like his order was delayed on Zomato.

Thankfully, and once again to 2K’s credit, this jump shot functionality is easily switched off and you can quickly revert to the OG.

Speaking of OG, I am especially glad that they haven’t tinkered too much with the parts of the game that were a hit from the past few editions. 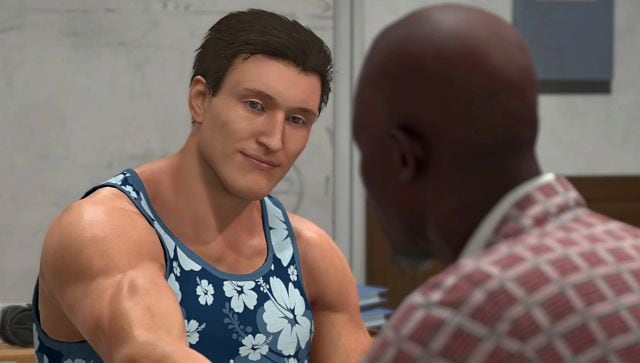 Just who was the costume designer on this one? Screen grab from NBA2K21

The Blacktop continues to be a great place to try out your own dream match-ups. Magic and Kareem in a 2-on-2 with Lebron and AD? You got it. A 1-on-1 between between Isiah Thomas Jr and Mugsy Bogues? That’s a weird one, but ok, you can do that too. With each variation from 1-on-1 to 5-on-5, you have to adjust the way you play to grab the W, which means a lot of time spent learning and perfecting your craft. And of course, a ton of fun on multiple controllers.

The MyLeague remains the sandbox of insanity it has always been with unlimited customisation and an AI that’s gotten smarter and smarter at beating you at your own salary cap game. But the new rookie class is not in yet, which means no new names to tinker with. Easily sorted with an update later in the year, I’m sure. But a real dampener for anyone hoping to spend their time trading their way up the draft in MyLeague or MyGM.

Oh and the Neighborhood now has… more colours. Cool, I guess. 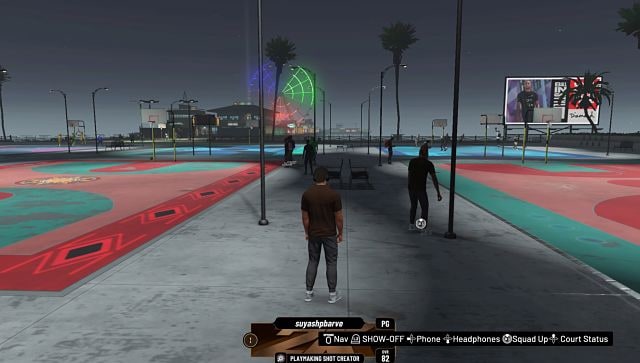 Crunch time view: There’s a lot about this game that could’ve been much, much better. But, if you aren’t an NBA 2K super-nerd, and you didn’t play NBA 2K20, you will still enjoy it. On the court, it’s almost faultless and the game continues to be excellent at rewarding you for levelling up and learning new skills. Which means there’s plenty of incentive for a long, dominant NBA career. Just make sure to get your revenge on Zion for that brutal pre-draft beatdown.