In today's Google Doodle, we join action straight from the Ski Jumping ramp where Flying Squirrel is all set to complete his jump.

Celebrating Day 12 of its Doodle Snow Games series and the eleventh day of the Winter Olympics in PyeongChang, today's Google Doodle focusses on ski jumping. We join the action straight from the ski jumping ramp where we see Flying Squirrel complete his jump. 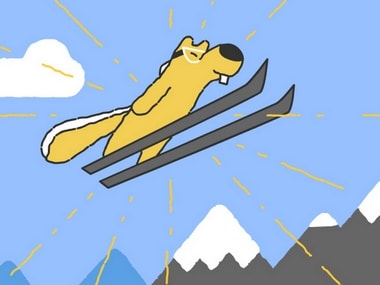 As per the description on its blog, Flying Squirrel is the crowd favourite at the event and has a huge advantage over his rivals since he can fly. He takes the leap and flies across the sky for a while making him the clear winner. He lands right near the judge's feet and collects his winner's broach. On speaking to Google about his victory, the squirrel responds saying that it was his fans' support that lifted him up to make the winning leap.

For the uninitiated, ski jumping is a form of Nordic skiing where the skiers glide down a (35 -37 degree) ramp at 90 kmph to jump and fly as far as they can go from the launching zone to make a stable landing in the landing section. There are five judges who decide the flying scores by deducting points for every element based on the skier’s flying posture and the landing posture from the full score of 20 points.

The Google Doodle series celebrated the skeleton competition on day 11 and cross-country skiing on day 10.