Google claims today's ice hockey match in the doodle is a rather 'friendly' gold medal battle between Squirrel and Chipmunk, referred to as 'furry cousins'.

Google is shifting focus back to ice hockey as we head towards day thirteen of the 2018 Winter Olympics in PyeongChang, South Korea. Today's doodle is in keeping with the Women's gold medal event scheduled to happen later today. The doodle also marks day 14 of the Doodle Snow Games series. 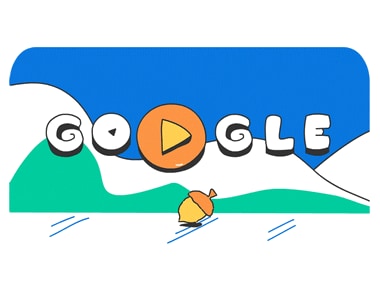 Google in its blog post claims that today's hockey match is a rather 'friendly' gold medal battle between Squirrel and Chipmunk, referred to as 'furry cousins' by Google. The doodle begins with Squirrel scurrying on the ice and whipping the acorn (the puck in this case) towards his opponent's net with his tail. But before the crowd breaks into a cheer, Chipmunk positions himself right in front of the net, gobbling up the acorn right when it is about to go in.

In today's final scheduled to take place at 9:40 am IST, the US women's team will be seeking its first gold medal finish since Nagano in 1998 as it takes on defending champions Canada. Canada, on the other hand, is seeking its fifth straight gold in what may be seen as a lopsided rivalry.

The Google Doodle series celebrated speed skating on day 13 of its series and ski jumping on day 12.

Google is expected to showcase 17 doodles in total as part of Doodle Snow Games. Today's doodle is spread across major parts of North America, a few countries in South America, all of Europe and Australia, major chunks of Africa and also parts of East and South-East Asia.