The Google Doodle shows the scene of a hockey game inside the rink, the place where ice-hockey matches are played. 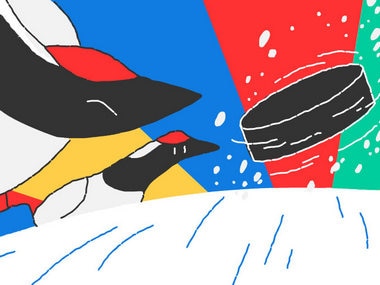 The Google Doodle shows the scene of a hockey game inside the rink, the place where ice-hockey matches are played. Two cranes who are competing against each other, meet in the middle at the face off.

The cranes are "unflappable" and fly from one side of the rink to the other, after the whistle from the ref starts the game.

In an unexpected incident, the puck, a disk that is used as a ball in the ice hockey game drops below through a hole in on the ice sheet they are skating on. Thankfully, a noise from beneath the ice sheet brings a friendly fish out of water that returns the puck. The Google Doodle mentions that "this game has truly reached new depths of cross-species cooperation! Who needs competition when you've got teamwork?" hinting at the level of teamwork involved in the sport.

The 8th day of the Google Doodle was celebrated as the Lunar New Year whereas the 7th day focused on the biathlon. The 6th day coincided with Valentine's Day.

Google is expected to showcase 17 doodles in total as part of Google Snow Games. The popularity of today's doodle is spread across major parts of North America, a few countries in South America, all of Europe and Australia and also parts of East and South-East Asia.