This being the 10th day of the Google Snow Games series, the Google doodle takes us back to the well-know hare-tortoise rivalry, but this time on ice.

Following up on the ongoing 2018 Winter Olympics, today's Google Doodle focuses on cross-country skiing. This being the 10th day of the Google Snow Games series, the doodle takes us back to the well-know hare-tortoise rivalry, but this time on ice. 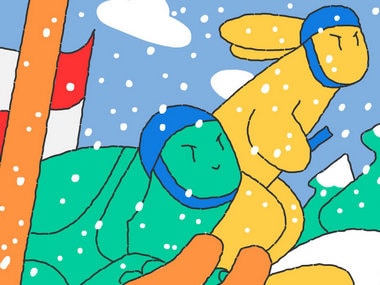 Cross-country skiing involves gliding across a snow-covered fields in the fastest time possible. The course is usually composed of three equal segments of uphill, level and downhill fields and athletes are required to employ classic or skate skiing techniques. There are a total of 12 events at this year's Olympics, with six events for men and six for women.

Google in its blog talks about how cross-country skiing does not involve difficult turns and jumps but is mostly an endurance test. Watching the doodle, we are introduced to the Hare and Tortoise who are rearing to go as soon as the race is flagged off by referee Mouse. As the race begins, Hare bolts off to a flying start at speeds of 64 kmph. Tortoise, on the other hand, starts inching forward with full determination but is just too slow.

In an interesting turn of events, Hare stops to check on his opponent, he drops his skiies and heads back toward the beginning of the course to help out tortoise. Getting back on his skiies we see great sportsmanship from the Hare who decides to pick up the tortoise and head towards the finish line together. They both cross the finish line together making both of them winners.

The Google Doodle series celebrated the spirit of ice hockey on the ninth day of the 2018 Winter Olympics and the eighth day celebrated the Lunar New Year.