Yuval Noah Harari talks of the future of war, climate and AI at Penguin Lecture 2018

Harari walked an audience of 100s through some of the likely possibilities for humanity’s near future.

Israeli historian, professor and author Yuval Noah Harari delivered the Penguin Annual Lecture last evening, taking off from his newest book '21 Lessons for the 21st century' that released in August earlier in 2018.

Harari’s books have seen widespread popularity across continents. His bestseller Sapiens: A Brief History of Humankind (2014) is now available in 45 different languages and has sold over a million copies globally.

One can’t help but relate his arguments on death, war, race, economics or explosive technologies like artificial intelligence in the context of today. He walked the audience of hundreds through some of the likely possibilities for humanity’s future.

The more concerning, imminent ones, in Harari’s view, are nuclear war, climate change and technological disruption. We’ve sowed the seeds for all three possibilities over hundreds of years, and are staring at the face of some wonderful and terrifying consequences of our actions.

Manipulating “the world inside” us

For much of the past, we have seen revolutions one after another, bringing new ways of controlling and manipulating the external world. The 21st century will tip the scales a different way, the professor said. People to turn inwards for some forms of development, the professor said at the lecture.

We’ve learnt a lot about the design of the world around us, but “we will soon learn how to design and manufacture life – animals and plants and humans, even completely new life forms that never existed before."

In Harari’s views, the main product of the 21st century economy won’t be textiles, vehicles and weapons anymore. Trade will soon see a flood of bodies and brains and minds, bringing what he believes might be “the greatest revolution since the beginning of biology, of life, 4 billion years ago.” 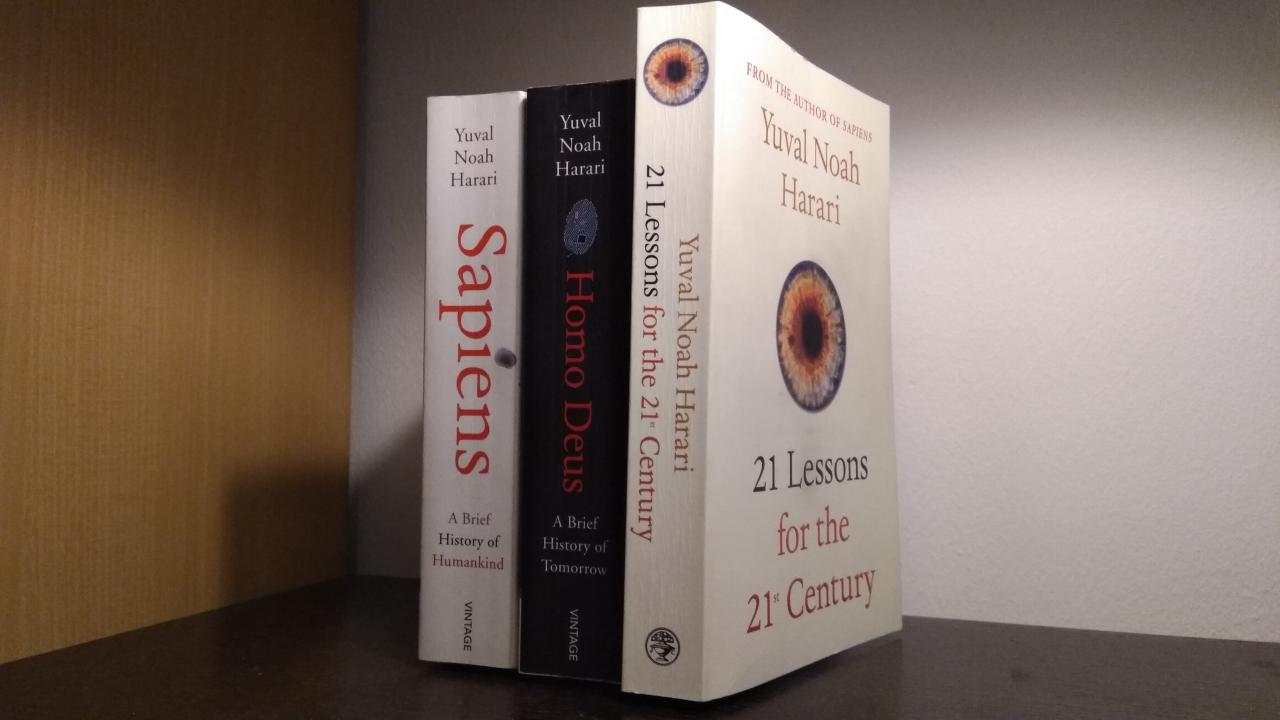 A new spin on creationism

“Nothing fundamental changed for 4 billion years of life. For 4 billion years, all of life was governed by the laws of natural selection and organic biochemistry. Natural selection with intelligent design has been the main engine of evolution…and what will determine the future of our evolution will be the designed not by the hands of some god above the clouds, but to (humans).

Science might enable us to start building inorganic life after 4 billion years of organic evolution, bringing a whole new plot twist to “creationism”.

“What will we do with such divine powers of creation?” he asks nobody in particular. “So far, we have been very irresponsible Gods. In the past, there has always been a gap between power (to alter natural systems) and wisdom (to thoroughly understand the consequences of those actions).”

We may still be far from seeing all the angles of a problem and solution, but the moves we make to manipulating the world inside us will be more costly than our toying and tweaking the world around us. Naturally, this is something that will have its own role to play in increasing global and economic division.

Ghosts of problems past

According to Harari, traditional acts of war and acts of socio-political dominance have come down in number so much over 70,000 years. “We are now living in the most peaceful time (in mankind’s history) on Earth.”

Yet, we haven’t shaken off famines, plagues and wars that we typically associate with “the past”. Much like the evolution of society or fashion, these problems are taking new forms – urban starvation, stubborn cancers and “data colonialism”.

These will hit us just as hard, maybe worse, than the problems over human history hit our ancestors, Harari says.

“War will return in an even worse form than we have ever encountered before. We should never underestimate human stupidity – it has been one of the most powerful forces in shaping history… it has almost equalled human wisdom in shaping the fortunes of our species,” Harari says.

Part of being human and intelligent today is recognising that it sometimes takes a lot of wise people to make peace, and lone “fools” to bring countries to their knees and start a war, Harari added. 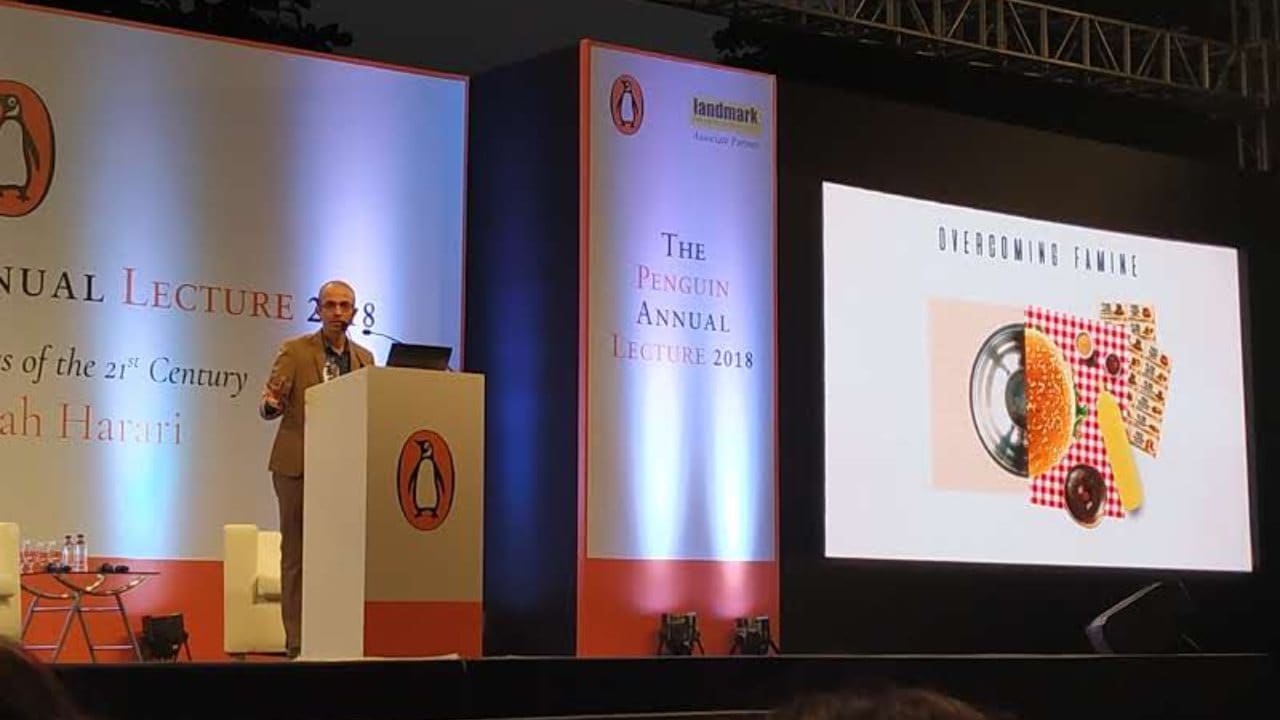 Whereas war is a future possibility, climate change is a present reality.

The ecological balance of the world is on a steep decline and a combination of global idea exchange and embracing eco-friendly technologies to combat climate change is one way out. This, he says, will likely prevent economy and ecology from crashing down simultaneously in the decades to come.

Picking the politician of tomorrow

Harari half-joked with the audience about how climate change could even make voting a little easier during campaign and election season.

"Ask them what will they do to lessen the danger of nuclear war, climate change, regulate AI and bioengineering, and their vision humanity in for 2050," he said. "And if they don't answer but keep talking about the past, then don't vote for them."

“As a scientist, I see a political debate focused – almost exclusively – on immediate local issues…ignoring the larger challenges of humankind that will impact everyone,” he said at the press briefing.

He declared that he neither has political acumen nor do his books reflect the politics of any country today.

“I can’t give particular political advice to any government on how to implement policies….but I do try to influence the macro-agenda of nations and humanity as a whole.”

AI and the rise of “the useless class”

He believes that AI could soon bring a “huge split” to the world and further the divide between developed nations like America and developing ones like India and Mexico.

“India could use cheap labour to pick up economic momentum during the agricultural revolution…but after AI, cheap labour will be the least important [resource].” Some examples of what manipulating the world within us means. Image courtesy. Image: Penguin RH

Developed countries are better equipped to cater to the world AI will bring in. Jobs will grow and evolve at a rapid pace, and the retraining of citizens would require new jobs which will be frequent and nation-wide.

Countries like India and Mexico are just years away from facing unemployment and “the rise of the useless class”. The only way to combat this eventuality is to prepare to retrain the job skills at a national level – again, and again as and when needed.

In Harari’s peek into an AI-powered world of tomorrow, one of the best tools to survive is to adapt – and quickly. For citizens, that means staying alert to what the rapidly-changing world needs, and for governments, providing far more opportunities for training and keeping their working class ‘relevant’.

We’re looking at an odd mix of exciting developments and grim problems in Harari’s version of possible events in the 21st century.

Nuclear war, climate change, technological disruption are all global challenges by nature, and can’t be regulated by one government alone.

The options open to governments will be to either move with the times by co-operation or be left behind in the process of science and technological change. A lot of the problems we’re up against can only be handled effectively without borders or “isolationism” getting in the way.

“So if you take away one thing from this talk, I think the most important global problems demand a global solution. Nationalism has its role to play…It always will,” said the professor. “But to be a good nationalist now requires that you be a globalist – in the 21st century, the only way to ensure safety and prosperity in one nation is cooperating with people in others.”