You can't stop a hurricane by nuking it, Donald Trump; here's why

Who's ready to say goodbye to days, possibly weeks, of electricity to lend the hurricane police a hand?

What is it about people in power that make them want to nuke everything they see?

First, it was Elon Musk, who discussed the possibility of nuking the Martian poles to terraform the planet for humanity. More recently, the President of the United States discussed the possibility of nuking hurricanes to stop them in their tracks. The former you can take with some degree of seriousness — he's building spaceships and rockets that are reshaping our view of space travel. But the latter... ? The less said the better.

Each year, the US experiences hurricane season between June and November. Off late, hurricanes have been getting more powerful, a direct result of global warming, according to several scientists. The last few hurricanes have cost the US several billion dollars in property damage.

Something has to be done, but making the effort to reduce global warming aside, scientists and policy-makers have come up with some pretty bizarre ideas in the past, including that of nuking hurricanes. The suggestion isn't a first for the world, but it is a first from President Trump. Nuking a hurricane, like several other bizarre suggestions from Trump, is a terrible, terrible idea. It's also a completely fruitless proposition. Here's why.

The idea behind nuking a hurricane is to disrupt its cycle. If part of the cycle is dissipated – whether that means the air isn't as warm as it needs to be, or the area of low pressure doesn't develop properly – a still-forming hurricane can lose its strength and break down to nothing more than gusts of wind as it reaches land. The trouble, though, is that "explosively" manipulating a single hurricane will need World War III levels of energy.

The heat released by a full-blown hurricane is equivalent to a 10-megaton nuclear bomb exploding every 20 minutes, according to the NOAA. We simply don't have enough bombs to counter that. In other words, brute force is simply not an option.

Nuking a hurricane will result in a shockwave, but nothing strong enough to disrupt a hurricane. There's no guarantee that the storm will be altered in any way by a nuclear weapon going off in its centre. Mathematically speaking, it just doesn't have the energy.

The story by Axios that President Trump wanted to blow up large hurricanes with nuclear weapons prior to reaching shore is ridiculous. I never said this. Just more FAKE NEWS!

An explosive, even one as powerful as a nuclear bomb, produces a shock wave (a short pulse of high pressure) that propagates away from the epicenter — faster than sound. That said, the barometric pressure (weight of the air above the ground), doesn't change dramatically once the shock has passed — which needs to happen to kill a hurricane.

Under normal conditions, ten metric tonnes (1,000 kilograms per tonne) of air bears down on each square meter of the surface. In the strongest hurricanes, there are 9 metric tonnes of pressure. This simply means that turning a Category 5 hurricane into a Category 2 hurricane will need about half a ton of air per square meter inside the hurricane's eye. That's half a billion (50,00,00,000+) tonnes for a hurricane eye with a 20-km radius, according to NOAA's Hurricane Research Division. Anyone know of a practical way of moving that volume of air around? 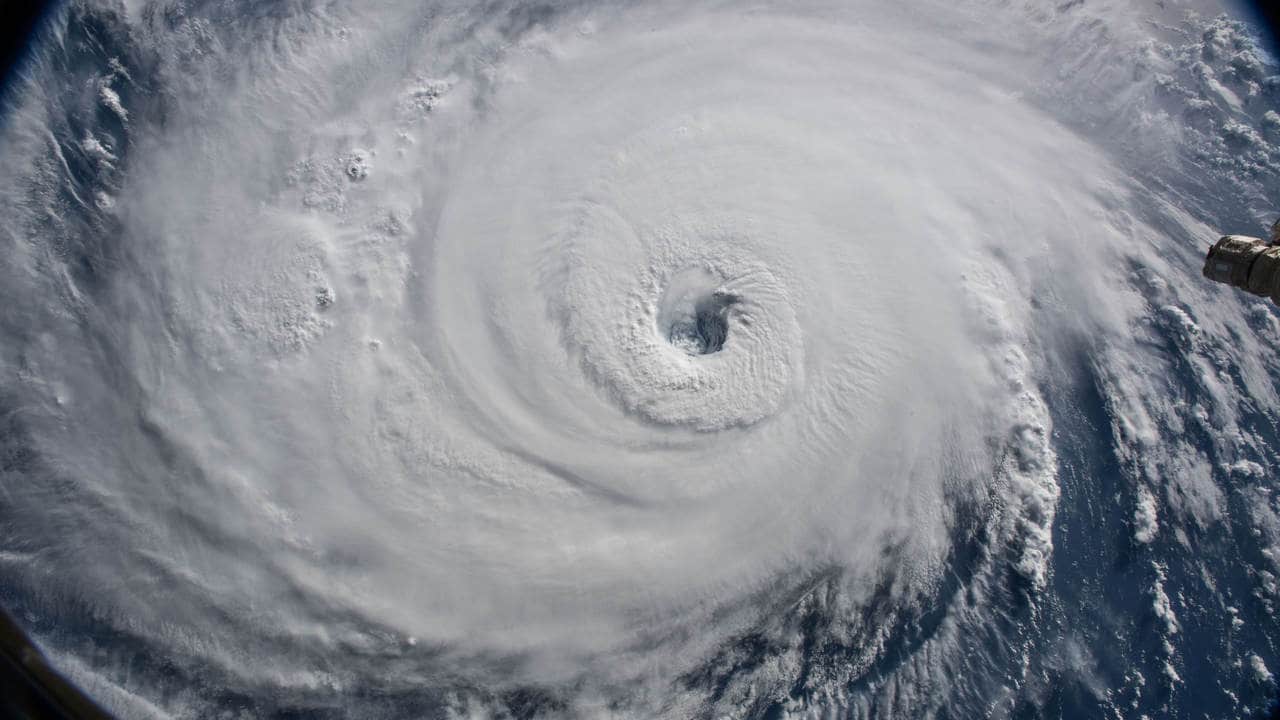 A view of Hurricane Florence is shown churning in the Atlantic Ocean in a west, north-westerly direction heading for the eastern coastline of the United States, taken by cameras outside the International Space Station on 12 September. Image: NASA

Even if we devised a dissipation method that could match the power of such a storm, there would be the non-trivial task of knowing exactly where the hurricane will be, days in advance, in order to mobilize our defenses.

Let's leave the complexity of firing a nuclear weapon into a hurricane aside for just a minute. What makes it a truly terrible idea is the potential fallout: radioactive gas and dust would move rapidly with the zippy wind speeds, affecting large land areas, people, wildlife and causing a plethora of environmental problems.

There's also sound logic to why it won't work as a strategy. It has a lot to do with the way hurricanes form. Hurricanes are a massive, low-pressure cyclone that boasts of wind speeds in excess of 120 kph. Hurricanes don't take place during colder seasons simply because they need warm water to form. Most of the world's hurricanes are born in the Atlantic Ocean.

When warm moisture rises, it releases energy, forming thunderstorms. As the number of thunderstorms being created grows, winds begin to move in a spiral. The upward (hot air rises) and outward (hot air rushes into cooler regions) movement of the winds creates a vortex, after which warm air in the upper atmosphere condenses to form clouds. From the churning motion of the fast-moving wind, a low-pressure area is formed on the ocean surface. This makes the hurricane even more vicious and also gives hurricanes their cyclone-like shape.

Of the 80-odd disturbances that form over the Atlantic Ocean each year, around five develop into hurricanes. With global warming and rising ocean temperatures, this number will eventually go up.

There isn't a single stealthy trick that the best forecasters in the world have at their disposal to predict which of the 80+ storms will turn into a full-blown, unstoppable hurricane. So, attacking a weak tropical wave or depression before it grows into a hurricane is no more promising than "nuking the eye". And that still means nuking at least 80 storms a year.

For now, both Trump and the rest of the world will simply have to make do with deft planning and believing in very real, extant threats like climate change.