As the world celebrates the Periodic Table, a look at the state of science in the Indian mindset and the importance of scientific temper.

In 1869 Russian inventor, Dmitri Mendeleev, while working on improving cheese-making techniques, made an unprecedented breakthrough. He postulated the periodic table, which neatly explained and categorised the elements and their recurring, periodic behaviour, and published its first draft. One hundred and fifty years later, the United Nations has declared 2019 as the International Year of the Periodic Table, and scientists the world over are celebrating. As a part of the celebrations in India, Dr Arnab Bhattacharya, chairman of Tata Institute of Fundamental Research’s (TIFR) Science Outreach and Popularisation programme, delivered a talk at the Advances in Science, Engineering and Technology (ASET) colloquium in Mumbai, a series of weekly talks discussing the latest in science. Bhattacharya's talk titled 'The Periodic Tables of the Universe' revolved around the different layouts of the periodic table that scientists have proposed over the years. He took his audience into the world of cylindrical, conical, and 3D periodic tables, spirals, loops, beautiful helices, even a theory involving the occult, and suggested that the most important tool for the sciences weren’t experiments, but seeing with the "third eye". “Most of them are aesthetic, purely aesthetic, but a few of them (periodic tables) might explain chemistry slightly better. In terms of scientific content, there’s no difference,” Bhattacharya tells Firstpost in an interview after the talk.

The periodic table is the most universal symbol of the sciences, besides being a link unifying its different branches. It represents information that goes beyond what's relevant to just chemists or scientists. It methodically lays out elements and the building blocks which make up the world we live in. As simply put by Bhattacharya, “Science is the process of finding out about the world around us,” and the periodic table is the most fundamental representation of that world.

With this talk, he hopes to make the periodic table more easily understandable, especially to younger students. “My passion is to take science out to kids”, says Bhattacharya, who also happens to be one of the founders of Chai and Why?, along with Surendra Kulkarni, former TIFR employee. The ten-year old initiative aims to be a variant of Europe’s science cafes — an informal setting and a neutral venue hosting a short talk by eminent researchers, with lots of time for two-way discussions afterward.

“The idea is to take somebody outside, to the public. To make it more accessible...it’s more informal and fun.”

Clearly, Chai and Why? was started with the intent of debunking the notion that science is a scary and difficult subject, with the talks being made accessible to anyone aged ten and above. The idea is to remove any barriers that stand between people and scientific knowledge. Bhattacharya makes sure that these talks don’t turn into tedious lectures, thereby encouraging public participation, questions and debate. The concept has received a widely positive feedback, and has encouraged them to expand to three venues in Mumbai — Prithvi Theatre, Ruparel College and the Alexandra Girls School. All talks are fully streamed and available on their YouTube channel, and their sessions have free entry.

Bhattacharya's role of heading the outreach department at TIFR entails interacting with thousands of children through the year, by conducting visits to the institute's laboratories. He also organises TIFR student and faculty talks at not just city schools, but smaller schools through an active rural programme as well. “We reach about 30,000 kids every year across all of this,” he says, with their visits often focusing on experiments using household objects that the kids can easily try at home. “I’m not doing science education. I won’t teach you things. I just want you to get excited about science. If you’re excited about something, you’ll want to figure it out on your own.” 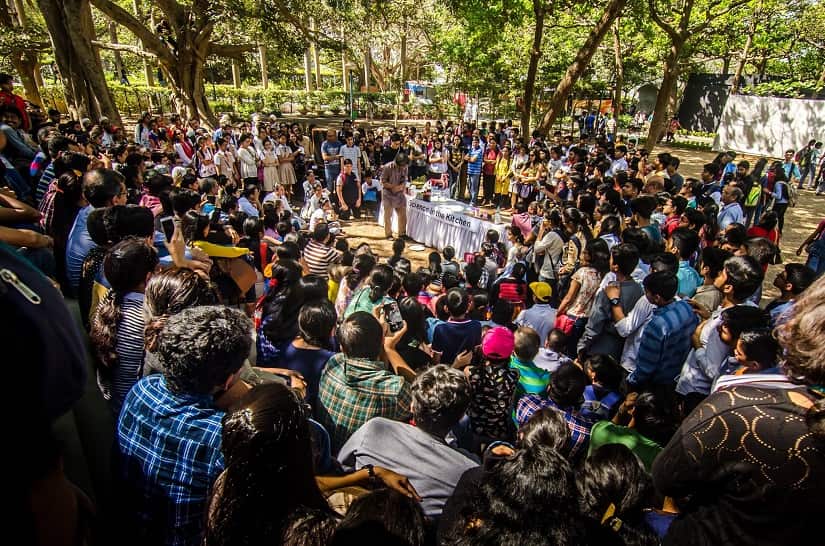 This excitement, however, is something the Indian school system seems to be systemically crushing. “Kids are exploring the world around them. That sense of curiosity which kids have, unfortunately, the way our formal education system is designed, it sort of stamps it out. We need to somehow keep up that excitement that they have”. This sense of curiosity, or 'scientific temper', as it is called, "doesn’t mean learn science. Scientific temper means think logically and rationally. Don’t just believe whatever somebody tells you,” Bhattacharya explains. He and other scientists aren’t the only ones calling for this shift in the Indian mindset — the government has declared 20 August as National Scientific Temper Day in India.

While asking people to be more rational in their thinking, Bhattacharya also highlights the role of the scientific community, encouraging them to be more accessible. “Scientists cannot afford to be in ivory towers saying tumko samjhega nahin (You won't be able to understand),” he says, mentioning how a sense of transparency needs to be fostered, with scientists explaining their research in order to receive expected government funding. Oftentimes, basic scientific inquiry can have far-reaching effects, and one can’t always fairly answer the question of ‘what is this research good for?’ He believes that in such situations, the government will only offer support if the public themselves are aware and encouraging of scientific studies.

A logical temperament can also save people from falling prey to countless rumours floating around on social media these days. According to Bhattacharya, “if you thought with a scientific mind, even what you know in school is often enough to be able to figure out that ‘oh, there is something fishy in this’.”

Technology, as confounding as it threatens to be, can also serve as an ally if used correctly to seek out information. However, the solutions being attempted don't accurately paint a picture of the country's difficult reality. “In India, it’s a problem of numbers. Even with 20,000 people or 100,000 people, that’s like a drop in the ocean," he says.

The real challenge is overcoming the primary hurdles to reach millions now. Bhattacharya confirms that the process is a long-term one. However, the two big steps in this direction seem to be: 1) Scientists interacting with the public and the government, and working within the system, since “it’s too big a problem to be solved by people outside the system”, and 2) Getting people excited about science, and propagating that temperament. After all, the periodic table, at its core, represents this very 'scientific temper' Bhattacharya and his ilk dream for India to nurture.