A wise being once said, better an oops than a what if.

Now that all of us have bid adieu to 2018 after being fairly lenient in December with our fitness routines, it’s time to take charge of one's health again.

The first month of the new year is setting the ball rolling for women everywhere with 'Cervical Cancer Prevention Week' from 21 to 27 January 2019. Cervical cancer takes the life of one woman every eight minutes in India as per statistics shared by Cancerindia.org. It is one of the largest contributors to cancer deaths in women.

Being at the heart of many households, women ought to get themselves checked for the deadly disease. How common is cervical cancer?

Cervical cancer is the fourth most commonly diagnosed cancer in women. In 2018, 570,000 new cases were detected, contributing towards 6.6 percent of all female cancers as per a World Health Organization (WHO) report.

Cervical cancer affects cells in the cervix – the entrance to the womb from the vagina, which start to grow abnormally and eventually affects other tissues and organs in the body too.

More prominent in sexually active women between ages 30 and 59 years, it strikes mostly in low- and middle-income countries. In fact, if WHO data is to be believed, nearly 90 percent of deaths from cervical cancer are from developing or underdeveloped countries.

This vast difference in cervical cancer cases in developed and developing or underdeveloped countries is owing to limited access to effective screening and treatment programs. Though the WHO follows a ‘screen and treat’ approach, the high cost and resources required for testing make it an inaccessible option for all, and an ineffective strategy for healthcare in countries like India.

Cervical cancer is the second most common female cancer in Indian women between 15 and 44 years of age. It caused 60,070 deaths in India in 2018, with the bulk of fatalities between ages 35 and 39, followed by women between 30 and 34. Cervical cancer awareness week comes around every year between 21 and 27 January.

Though the figures seem high, there is good news: if detected at an early stage, cervical cancer is often curable. In case it isn't, it is generally possible to prolong lifespan and slow down the process with medication.

However, it is a tricky syndrome – it may have no apparent signs in its early stages. That said, it is still preventable. How? By vaccinating young women between 15-26 years of age against human papillomavirus (HPV). Another way to keep a check is by getting the regular screening done till at least the age of 65.

As a matter of fact, including a regular pelvic examination in one's annual health checkup is highly advisable for women over 21 or three years after they become sexually active.

During advanced stages of cervical cancer, women may notice symptoms like vaginal bleeding after sex, between periods or after menopause. Pelvic pain during intercourse or otherwise is another warning sign of this type of cancer. In the case of heavy, watery and foul-smelling discharge with blood from the vagina, one should consult a doctor immediately.

Often, a surgical procedure like hysterectomy (removing part of all of the uterus), removal of pelvic lymph nodes, chemotherapy or radiation therapy is an option that doctors may consider as the cancer progresses. 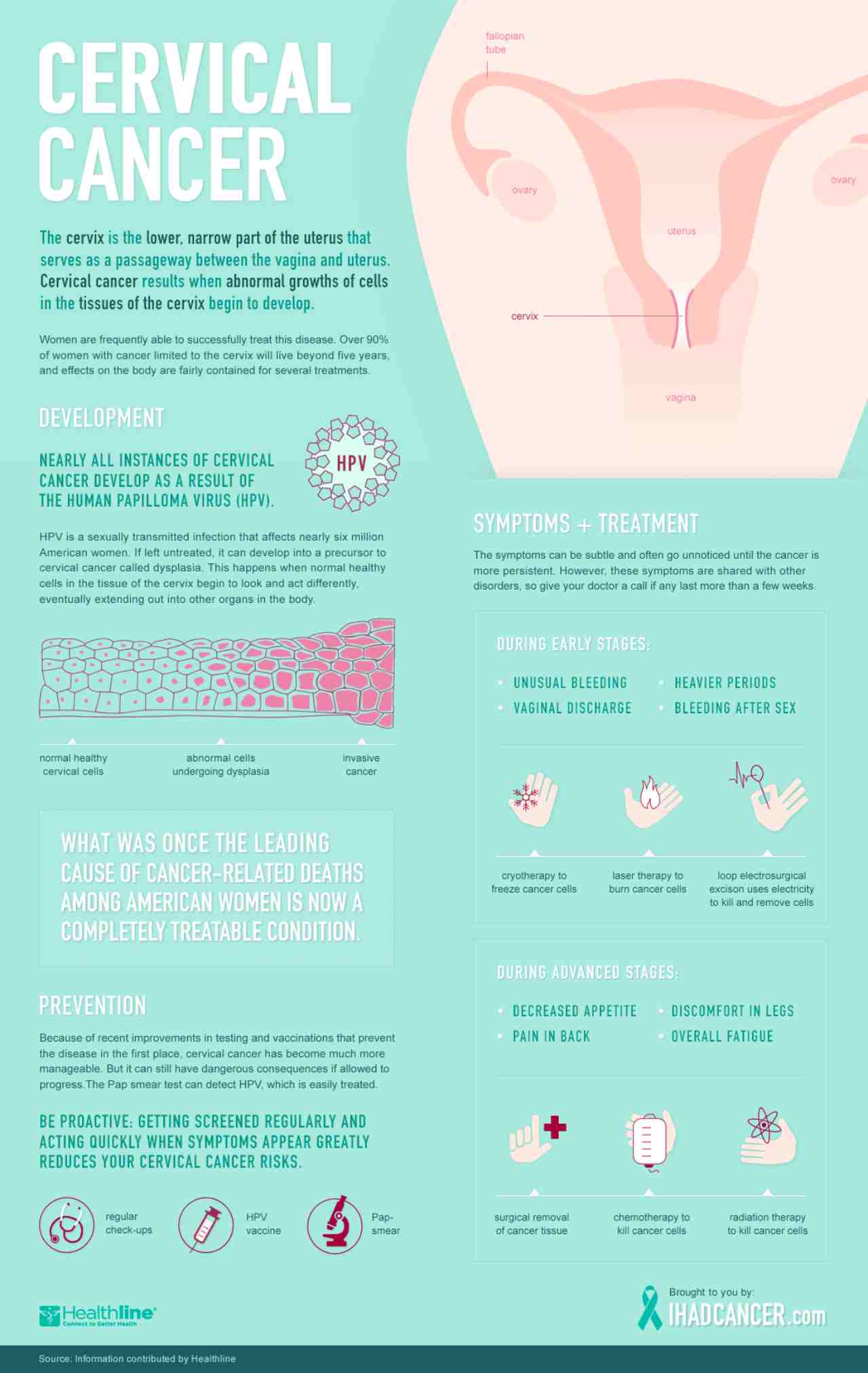 Who can get cervical cancer?

Cervical cancer has no certain causes other than HPV, a virus that can be passed from person to person through any type of sexual contact with men or women. That said, it isn't a guarantee that every woman with an HPV infection will develop cervical cancer. We know that infection with HPV-16 and HPV-18 are the most likely to cause cervical cancer.

Other factors responsible for the malady are environment and lifestyle, multiple sexual partners without using a condom during sex, and other sexually transmitted infections like HIV/AIDS, chlamydia, etc. A weak immune system, having sex at an early age and smoking are a few other factors that can cause this cancer.

Prevention is better than ignorance

Cervical Cancer Prevention Week is an opportunity for everyone to stay informed, educated and help raise awareness about this fast-spreading ailment. It is recommended that women get pap smears and HPV tests done, consider getting an HPV vaccine and using condoms during sex in case their partner's HPV and STD statuses are known.

Of the 14 lakh cancer patients in India, breast cancer, cervical cancer, oral cancer and lung cancer constitute 41 percent of the total cases. But the good news is that there has been a drastic drop by 21.2 percent in cervical cancer cases from 2012 to 2018.

Since cervical cancer is treatable, a simple step towards your health can help save your long term stress and a considerable amount of money. For those who support or want to help raise awareness for the cause of cervical cancer, wear a teal- or white-coloured ribbon to spread the word.