More than 60 percent of the water supply for the world’s 100 largest cities originates in fire-prone watersheds.

Fabric curtains stretch across the huge Warragamba Dam to trap ash and sediment expected to wash off wildfire-scorched slopes and into the reservoir that holds 80 percent of untreated drinking water for the Greater Sydney area.

In Australia’s national capital of Canberra, authorities are keeping a wary eye on burning forests and bushland, hoping a new water treatment plant and other measures will prevent a repeat of water quality problems and disruption that followed deadly wildfires 17 years ago. 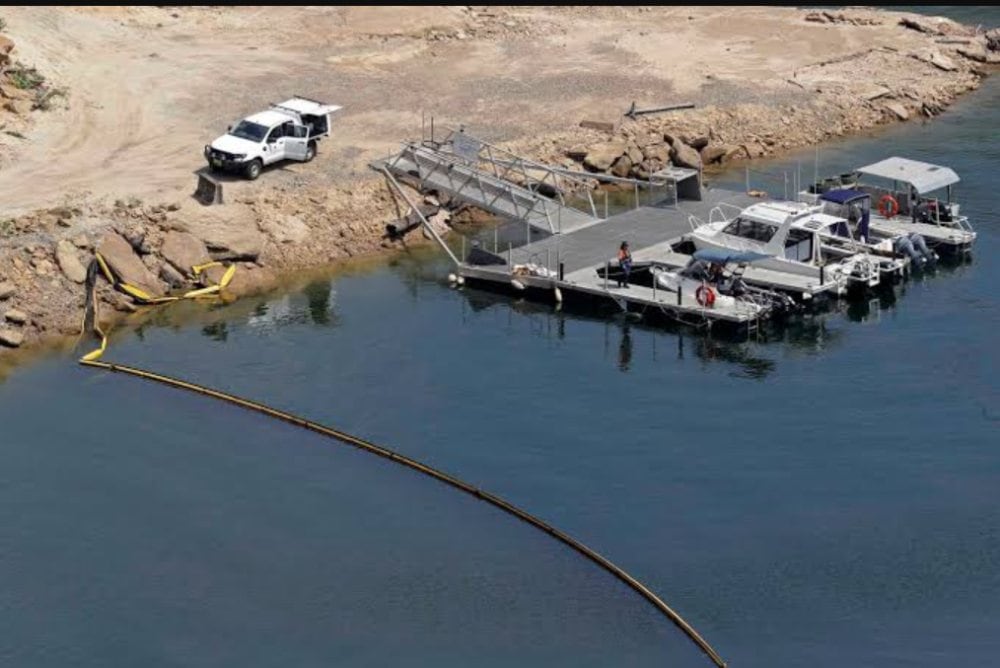 A boom floats across a small bay near the dam wall at Warragamba Dam in Warragamba, Australia. IMage credit: AP

There have not yet been major impacts on drinking water systems in southeast Australia from the intense fires that have burned more than 104,000 square kilometers since September. But authorities know from experience that the biggest risks will come with repeated rains over many months or years while the damaged watersheds, or catchment areas, recover.

And because of the size and intensity of the fires, the potential impacts are not clear yet.

“The forest area burned in Australia within a single fire season is just staggering,” said Stefan Doerr, a professor at Swansea University in England who studies the effects of forest files on sediment and ash runoff. “We haven’t seen anything like it in recorded history.”

The situation in Australia illustrates a growing global concern: Forests, grasslands and other areas that supply drinking water to hundreds of millions of people are increasingly vulnerable to fire due in large part to hotter, drier weather that has extended fire seasons, and more people moving into those areas, where they can accidentally set fires.

More than 60 percent of the water supply for the world’s 100 largest cities originates in fire-prone watersheds — and countless smaller communities also rely on surface water in vulnerable areas, researchers say. 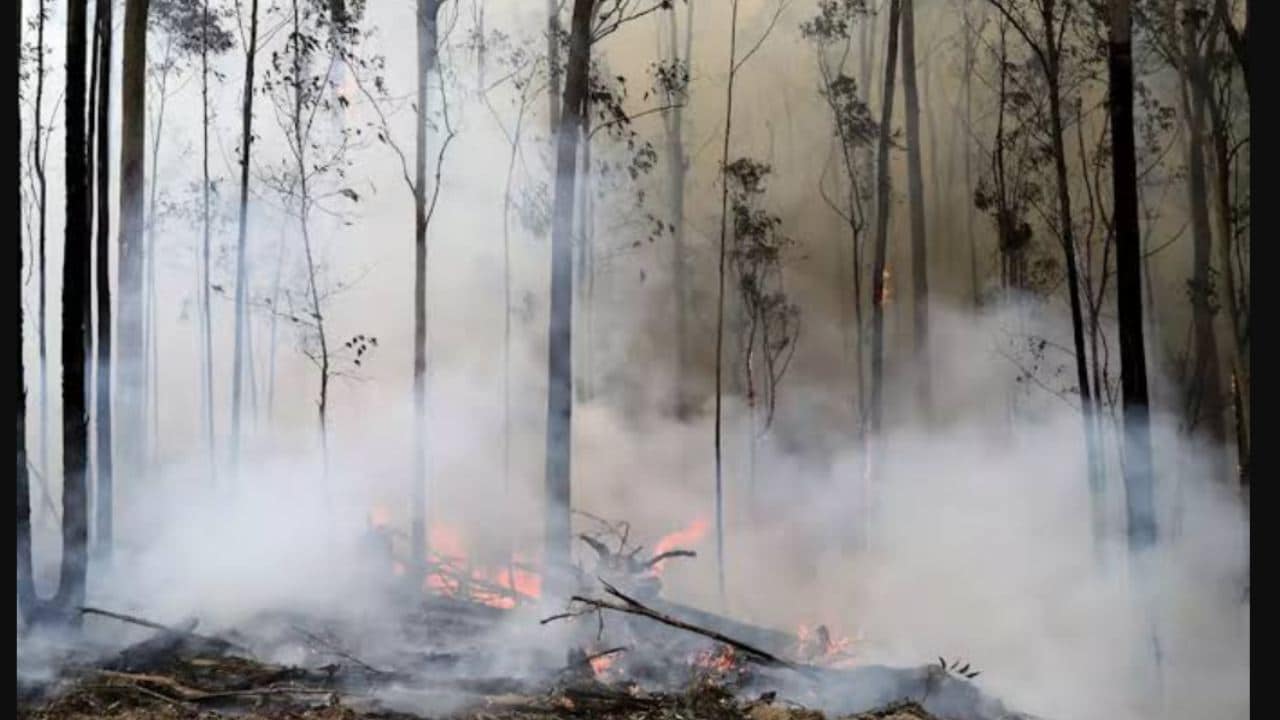 flames from a controlled fire burn around trees as firefighters work at building a containment line at a wildfire near Bodalla, Australia. Image credit: AP

When rain does fall, it can be intense, dumping a lot of water in a short period of time, which can quickly erode denuded slopes and wash huge volumes of ash, sediment and debris into crucial waterways and reservoirs. Besides reducing the amount of water available, the runoff also can introduce pollutants, as well as nutrients that create algae blooms.

What’s more, the area that burns each year in many forest ecosystems has increased in recent decades, and that expansion likely will continue through the century because of a warmer climate, experts say.

Most of the 64,000 square kilometers that have burned in Victoria and New South Wales have been forest, including rainforests, according to scientists in New South Wales and the Victorian government. Some believe that high temperatures, drought and more frequent fires may make it impossible for some areas to be fully restored.

Very hot fires burn organic matter and topsoil needed for trees and other vegetation to regenerate, leaving nothing to absorb water. The heat also can seal and harden the ground, causing water to run off quickly, carrying everything in its path.

That in turn can clog streams, killing fish, plants and other aquatic life necessary for high-quality water before it reaches reservoirs. Already, thunderstorms in southeast Australia in recent weeks have caused debris flows and fish kills in some rivers, though fires continue to burn.

“You potentially get this feedback cycle,” where vegetation can’t recolonize an area, which intensifies erosion of any remaining soil, said Joel Sankey, research geologist for the U.S. Geological Survey

The role of climate change is often difficult to pin down in specific wildfires, said Gary Sheridan, a researcher at the University of Melbourne. But he said the drying effects of wildfire — combined with hotter weather and less rainfall in much of Australia, even as more rain falls in the northern part of the country — mean that “we should expect more fires.” 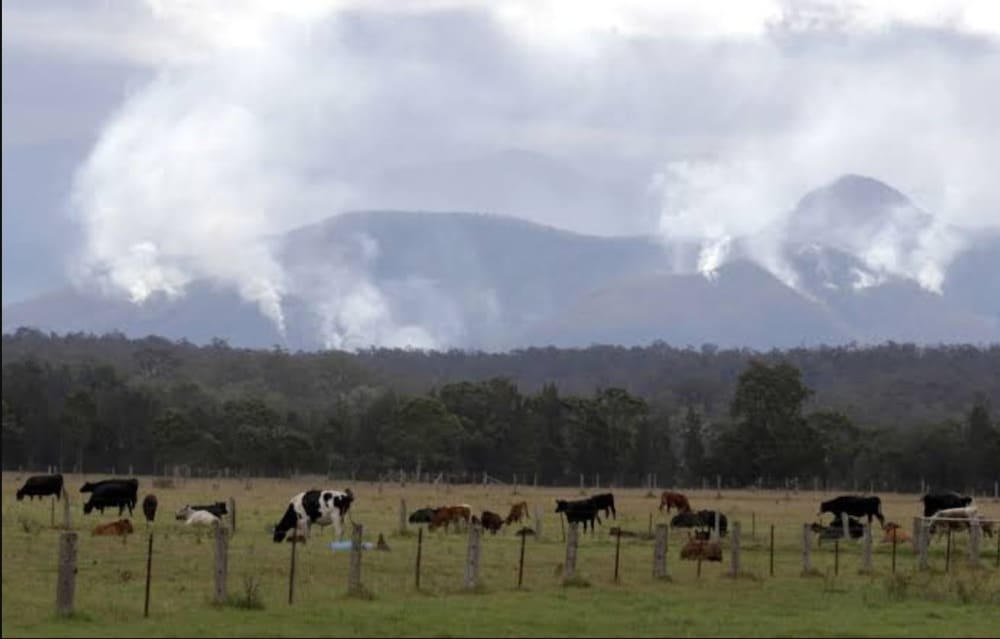 cattle graze in a field as smoke rises from burning fires on mountains. Image credit: AP

But climate change has affected areas such as northern Canada and Alaska, where average annual temperatures have risen by almost 4 degrees (2.2 degrees Celsius) since the 1960s, compared to about 1 degree (0.55 degrees Celsius) farther south. As a result, the forested area burned annually has more than doubled over the past 20 to 30 years, said Doerr, from Swansea University.

Although there might be fewer cities and towns in the path of runoff in those areas, problems do occur. In Canada’s Fort McMurray, Alberta, the cost of treating ash-tainted water in its drinking-water system increased dramatically after a 2016 wildfire.

In the Western U.S., 65 percent of all surface water supplies originate in forested watersheds where the risk of wildfires is growing — including in the historically wet Pacific Northwest. By mid-century almost 90 percent of them will experience an increase — doubling in some — in post-fire sedimentation that could affect drinking water supplies, according to a federally funded 2017 study.

“The results are striking and alarming,” said Sankey, the USGS geologist, who helped lead the study. “But a lot of communities are working to address these issues,” he added. “It’s not all doom and gloom because there are a lot of opportunities to reduce risks,”

Denver Water, which serves 1.4 million customers, discovered “the high cost of being reactive” after ash and sediment runoff from two large, high-intensity fires, in 1996 and 2002, clogged a reservoir that handles 80 percent of the water for its 1.4 million customers, said Christina Burri, a watershed scientist for the utility.

It spent about $28 million to recover, mostly to dredge 1 million cubic yards (765,555 cubic meters) of sediment from the reservoir.

Since then, the utility has spent tens of millions more to protect the forests, partnering with the U.S. Forest Service and others. to protect the watershed and proactively battle future fires, including by clearing some trees and controlling vegetation in populated areas.

Utilities also can treat slopes with wood chips and other cover and install barriers to slow ash runoff. They purposely burn vegetation when fire danger is low to get rid of undergrowth.

Canberra’s water utility has built in redundancies in case of fire, such as collecting water from three watersheds instead of two, and it can switch among sources if necessary, said Kristy Wilson, a spokeswoman for Icon Water, which operates the system. Water can be withdrawn from eight different levels within the largest dam to ensure the best-quality water, even if there is some sediment, she said.

That is paired with simpler measures such as using straw bales, sediment traps and booms with curtains to control silt, and physically removing vegetation around reservoirs and in watersheds to reduce fire fuel, she said.

Eventually, some communities might need to switch their water sources because of fires and drought. Perth, on the western coast, has turned to groundwater and systems that treat saltwater because rainfall has decreased significantly since the early 1970s, said Sheridan of University of Melbourne.

But, for now, millions of people will continue to drink water that originates in increasingly fire-prone forests.

World Asthma Day: How to choose the right air purifier especially if you have asthma