In less than 100 million years, Phobos will get close enough to Mars to be ripped apart, transforming into a beautiful system of rings.

Mars is the darling of many planetary scientists, who continue to visit it through increasingly advanced robotic explorers. But don’t forget that our planetary neighbor is adorned with two moons: puny Phobos, a lumpy mass 17 miles across; and diminutive Deimos, just 9 miles long. Their names in ancient Greek may mean “fear” and “dread,” but the aesthetics of these Lilliputian space potatoes inspire anything but.

They don’t look anywhere near as interesting as the volcanic or icy-ocean moons of Jupiter and Saturn, nor is their desolation as extreme or diverse as Earth’s moon. But that hasn’t stopped generations of planetary scientists from being eager to get a closer look at the ramshackle duo.

The Soviet Union and, later, Russia have tried three times to reach Phobos, but software errors and launch disasters have doomed every attempt. U.S. scientists have tried and, so far, failed to convince the powers-that-be at NASA that a mission to the two moons will be worthwhile. The next great hope is Japan, which is aiming to launch a heist mission to Phobos in 2024 that will try to steal some of its rocks.

What’s all the fuss about? For many, the desire to visit Phobos and Deimos was galvanized by their deeply mysterious nature.

We don’t know where the moons came from because they look like asteroids foreign to the red planet but behave like byproducts of Mars’ early, impact-laden history. And if that Japanese mission manages to grab some samples and decode the chemistry of the mangled moons, we might be able to discover their origins. In doing so, we won’t just gain a better understanding of Mars’ ancient past. We will also be able to peer back in time to the chaos that shaped the early solar system. 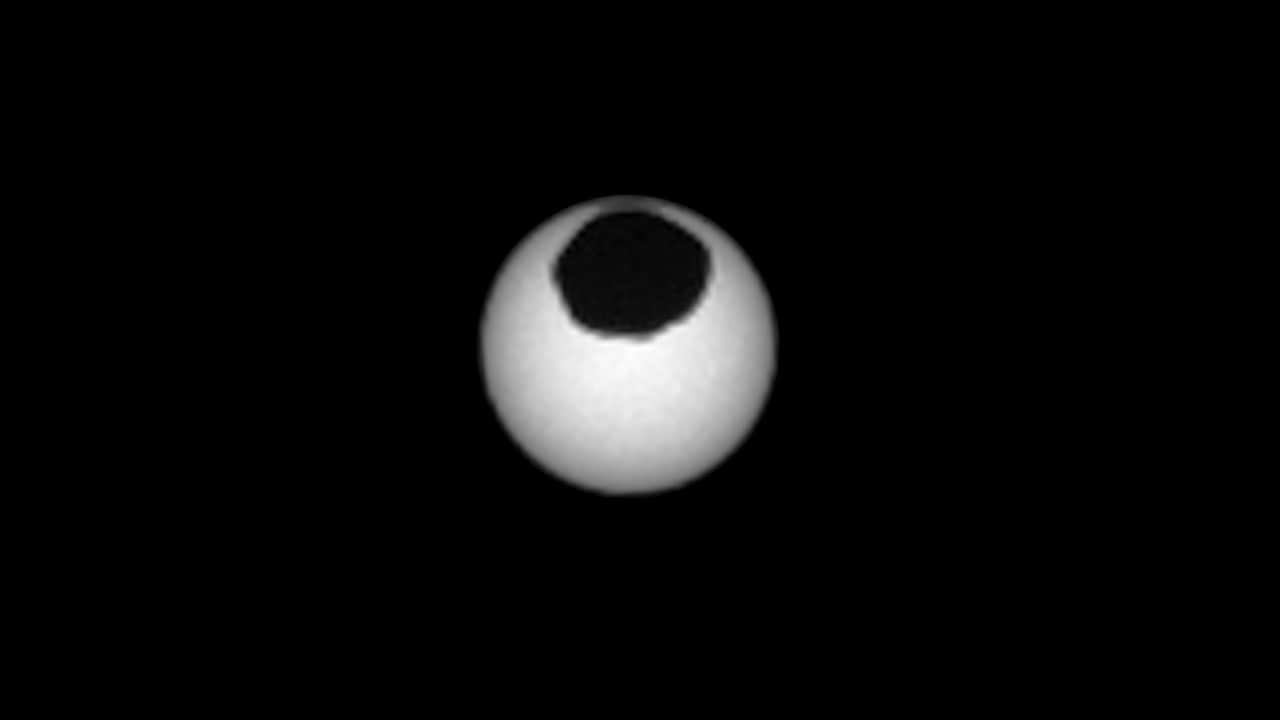 Image of a solar eclipse by Mars' moon Phobos as seen on Mars by the Curiosity rover on 26 March, 2019. Image: NASA/JPL

Much of what we know about Phobos and Deimos comes from serendipitous observations. Rovers on the surface as well as mechanical eyes orbiting Mars are sometimes in the right place to angle their cameras and snap shots of the two moons. Phobos, being larger and closer to Mars, can be seen in greater detail: a misshapen mess scarred by a large crater and multiple grooves that look like they were made by a cosmic cat’s claws.

“They check all of the boxes that are consistent with them being these captured asteroids,” said Fraeman — rubbly patchworks that drifted too close to Mars long ago and became trapped in the planet’s orbit.

But both moons orbit the equator in a neat-and-tidy circular fashion, which suggests they coalesced from a disk of debris that danced around a young Mars. It’s difficult to capture an asteroid and have it “wind up in this beautiful, symmetric, circular orbit,” said Jeffrey Plaut, the project scientist for the Mars Odyssey mission.

Mars, having one-tenth of Earth’s mass, has a relatively weak gravitational pull, so it seems improbable that it would be able to capture asteroids zipping by, said Tomohiro Usui, a robotic planetary exploration expert at the Japan Aerospace Exploration Agency. But if they formed from a debris disk launched up from Mars after a colossal impact, Deimos should be orbiting closer to Mars than it is today.

Reconciling their appearances with their orbits is difficult.

Cast as siblings, both moons may not even have the same origin story.

In less than 100 million years, said Matija Ćuk, a research scientist at the SETI Institute in Mountain View, California, Phobos will get so close to Mars that its gravity will tear the moon apart, transforming into a beautiful system of rings.

It won’t be the first time, some scientists say. Recent calculations suggest that Phobos was once 20 times more massive. But, as one hypothesis goes, it drifted toward Mars and shattered into ring material, much of it raining onto Mars. The remaining ring material clumped together into a new, smaller Phobos. This cycle has repeated several times over billions of years, with Phobos shrinking with every completed cycle.

Although made of ancient matter, the Phobos we see today may have been assembled just 200 million years ago. If it were confirmed that Phobos is a haphazardly clumped-together mass, it would be a revelation, suggesting planets with rings are the norm for our solar system.

Tiny Deimos, on the other hand, may have remained intact for 3.5 billion years. It is on track to eventually escape Mars entirely, Usui says, to wander elsewhere in the void. NASA’s Perseverance rover, launching Thursday, is the first stage of a protracted series of missions to bring pristine samples of Mars back to Earth for study. Mars’ atmosphere, ancient volcanism and flowing water has eroded away many of the planet’s earliest rocks. But if Phobos is made of Martian flotsam from a massive impact shortly after the planet’s birth, then the moon has retained the earliest memories of Mars.

“Many theories suggest the terrestrial planets, including the Earth, formed dry, and water was delivered by icy meteorites that were scattered inward,” Usui said. “If the moons are captured asteroids, they are evidence of this process in action and their composition shows what materials were delivered to the early Earth.”

Meteors crashing into Mars could have coated Phobos in a fine layer of Martian dust sourced from all over the planet. This matter may be both very young and extremely old, and grabbing some of it will help scientists unpack “how Mars may have progressed from a habitable world to an uninhabitable one,” Usui said.

With one successful (albeit problem-riddled) asteroid sample-return mission under its belt and another speeding back to Earth with more asteroid matter, the Japanese space agency has a “fairly good track record” at snatching up space rocks, Fraeman said. Hopes are understandably high for Japan’s Martian Moons eXploration, or MMX mission, which will arrive at Mars in 2025.

Should it be successful, these huge planetary science questions may finally have clear answers. We will come to see not just Mars, but also Earth, in a new light.