Why do astronomers believe dark matter exits even though they have not seen it?

The Sun orbits at 230km per second despite being 26,700 light-years away from our galaxy’s centre.

Dark matter, by its very nature, is unseen. We cannot observe it with telescopes, and nor have particle physicists had any luck detecting it via experiments.

So why do I and thousands of my colleagues believe most of the universe’s mass is made up of dark matter, rather than the conventional matter that comprises stars, planets, and all the other visible objects in our skies?

To answer that question you need to appreciate what dark matter can and cannot do, understand where in the universe it lurks, and realise that “dark” is just the start of the puzzle. The universe is home to a dizzying number of stars and planets. But the vast bulk of the universe is thought to be invisible dark matter. image credit: Illustris Collaboration, CC BY-NC

Our dark matter story starts with speed and gravity. Throughout the cosmos we see objects travelling in orbits under the influence of gravity. Just as Earth orbits the Sun, the Sun orbits the centre of our galaxy.

The speed required to keep a celestial body in orbit is a function of mass and distance. For example, in our Solar System, Earth moves at 30km per second, whereas the most distant planets dawdle at several kilometres per second.

Our galaxy is incredibly massive, so the Sun orbits at 230km per second despite being 26,700 light years away from our galaxy’s centre. However, as we move further from the centre of the galaxy, the orbital speeds of the stars remains roughly constant. Why?

Unlike our Solar System, whose mass is dominated by the Sun, mass in our galaxy is spread across thousands of light years. As one moves to larger distances from the galactic centre, the stars and gas enclosed within this radius increases. Can this additional mass explain the vast speeds of the most distant stars in our galaxy? Not quite. The motion of stars and gas in Andromeda provided some of the first evidence for dark matter. image credit: Adam Evans

In the 1960s, the pioneering US astronomer Vera Rubin measured the orbital speeds in the Andromeda galaxy (the galaxy next to the Milky Way) to distances of 70,000 light years from that galaxy’s core. Remarkably, despite this distance being well beyond the bulk of Andromeda’s stars and gas, the orbital speed remained near 250km/s.

This phenomenon isn’t unique to individual galaxies either. Back in the 1930s, Swiss-American astronomer Fritz Zwicky found that galaxies orbiting within galaxy clusters were moving far faster than expected.

What’s going on? One possibility is that a vast amount of unseen mass extends beyond the stars and gas. This is dark matter.

Indeed, the work of Zwicky, Rubin and subsequent generations of astronomers indicate there’s more dark matter in the universe than conventional matter. (As for dark energy, that’s a whole other story.)

Remarkably, our inability to see or detect dark matter provides clues as to how it behaves. It must have few interactions with itself and conventional matter apart from the force of gravity – otherwise we would have detected it emitting light and interacting with other particles.

As dark matter mostly interacts via gravity alone, it has some curious properties. A cloud of hot gas in space can lose energy by emitting light, and thus cool down. A sufficiently massive and cold gas cloud can collapse under its own gravity to form stars.

This explains an apparent contradiction. While dark matter may dominate the mass of the universe, we don’t think there is much of it in our Solar System.

As the motion of dark matter is dominated solely by gravity, it is also comparatively easy to model analytically and in simulations.

Since the 1970s we have had formulae for the number of dark matter structures, which also happen to predict the number of massive galaxies and clusters of galaxies. Furthermore, simulations can model the buildup of structures through the history of the universe. The dark matter paradigm doesn’t just fit data, it has predictive power.

The motion of dark matter is dominated by gravity, so it is easier to simulate than conventional matter.

Is there an alternative to dark matter? We infer its presence using gravity, but what if our understanding of gravity is wrong? Perhaps gravity is stronger at large distances than we think.

So it should be easy to tell which theory is right, right? Not exactly, as dark matter and conventional matter roughly follow each other around. But there are some useful exceptions.

Smash clouds of gas and dark matter together and something wonderful happens. The gas collides to form a single cloud, while the dark matter particles just keep moving along under the influence of gravity. This happens when clusters of galaxies collide with each other at vast speeds. 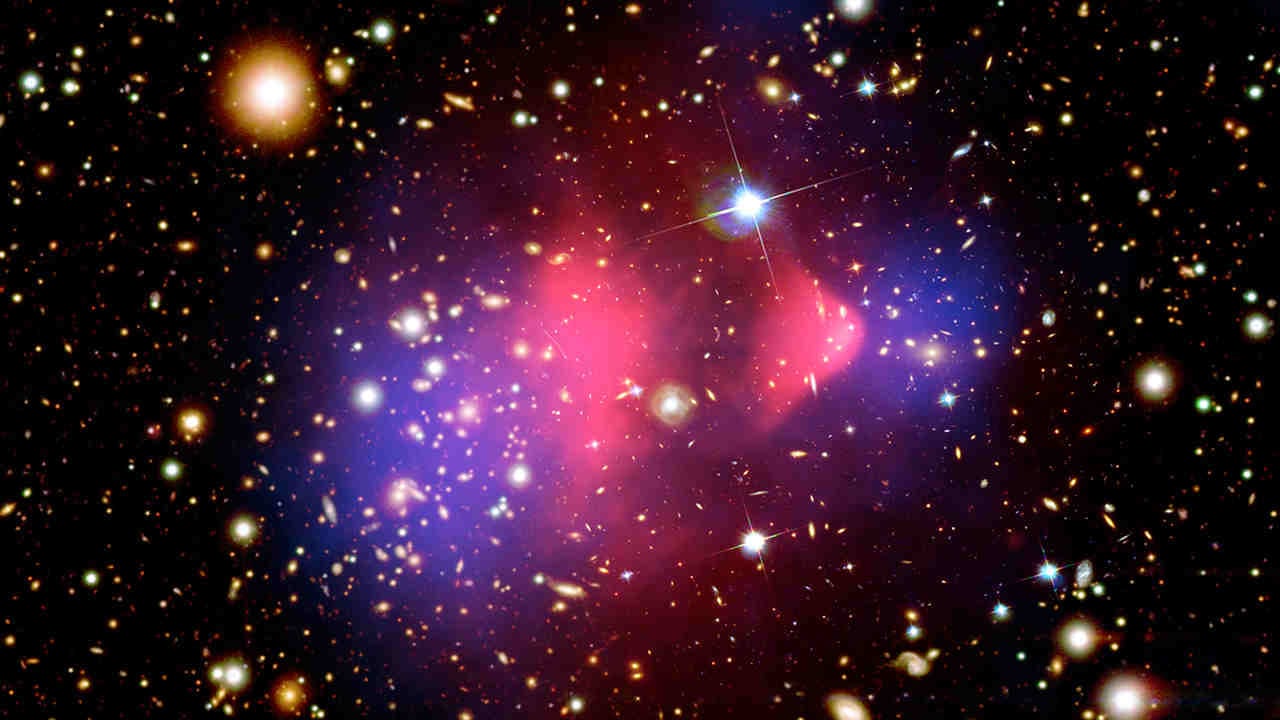 We can see the influence of dark matter not just today but in the distant past, right back to the Big Bang.

The Cosmic Microwave Background, the afterglow of the Big Bang, can be seen in all directions. And in this fireball we can see ripples, the result of sound waves travelling through ionised gas. 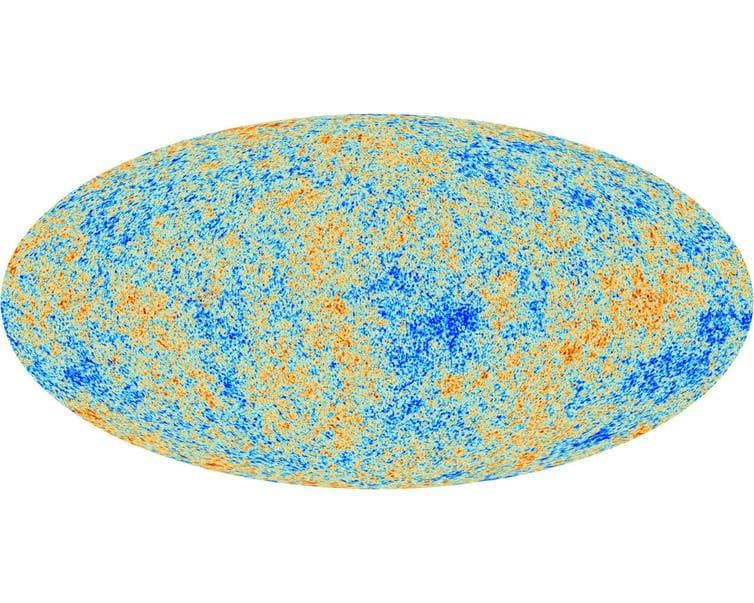 As expected, measurements of these ripples taken by satellites and ground-based observatories reveal there’s more dark matter than conventional matter in our universe. 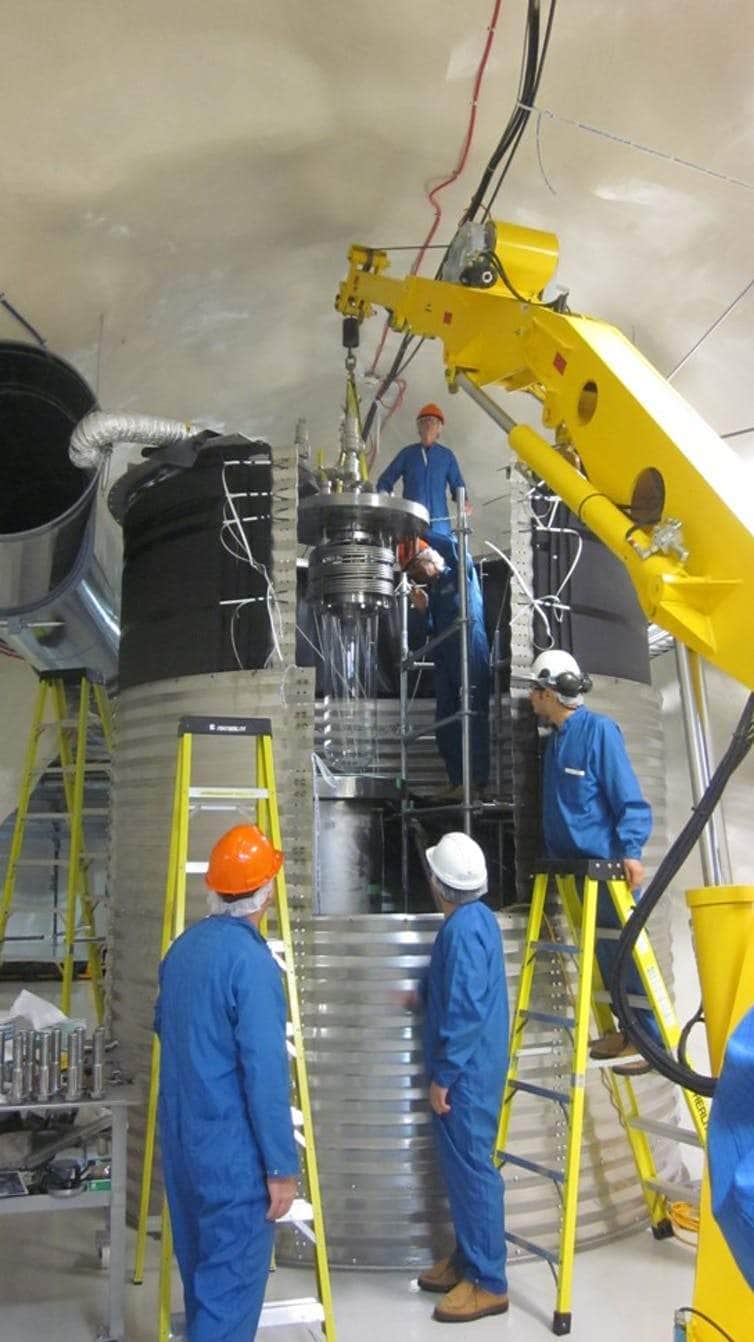 So is the case closed? Is dark matter definitely the answer? Most astronomers would say dark matter is the simplest and best explanation for many of the phenomena we see in the universe. While there are potential issues for simplest dark matter models, such as the number of small satellite galaxies, they are interesting problems rather than compelling flaws.

But the fact remains that we are yet to detect dark matter directly. This doesn’t particularly bother me, as physics has a history of particles that have taken decades to directly detect. If we haven’t detected it 20 years from now I may be concerned, but for now I’m betting that dark matter is the real deal.