Director-General Tedros Adhanom Ghebreyesus defended the WHO's role after the US withheld support to resolve the pandemic.

The World Health Organization's head said on Tuesday he would keep leading the global fight against the coronavirus pandemic, after US President Donald Trump threatened to cut off funding and quit the body.

WHO Director-General Tedros Adhanom Ghebreyesus defended the agency's role after the United States again withheld full support for a resolution on the pandemic.

"We want accountability more than anyone," Tedros told a virtual meeting of the WHO'S 194 member states. "We will continue providing strategic leadership to coordinate the global response."

Washington allowed the resolution calling for a review into the global response to the pandemic to pass by consensus, but said it objected to language about reproductive health rights and permission for poor countries to waive patent rules.

WHO officials running the meeting clapped and cheered after the resolution was passed without a vote hours after Trump tweeted his threat to pull the United States out of the body.

It calls for a review into the WHO-led global response, something the United States has demanded. But the U.S. mission in Geneva said in a statement that paragraphs on the right of poor countries to waive patents to obtain medicine during a health emergency would "send the wrong message to innovators" trying to produce new drugs and vaccines.

The reproductive healthcare language could be interpreted as requiring countries to permit abortion. "The United States believes in legal protections for the unborn," it said.

China and the United States also sparred in the closing moments of the assembly over the issue of Taiwan. Taiwan lobbied hard to be included as an observer at the two-day meeting and received support from the United States, Japan and others, but says it was not invited due to opposition from China.

Even as Trump has proposed quitting the WHO, the body has received backing and a two-year pledge of $2 billion in funds from China's President Xi Jinping.

Many other leaders expressed support for Tedros. 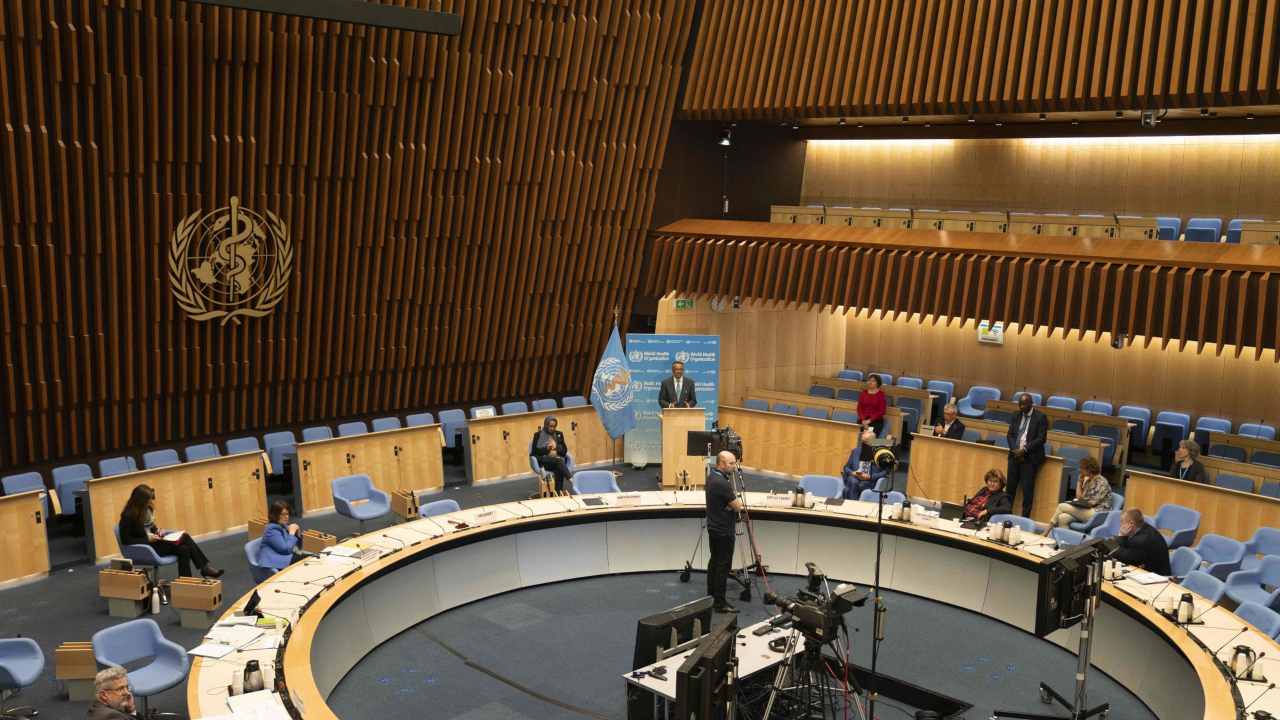 A glimpse of the virtual WHO Assembly in Geneva. Image: WHO

"At times like these, the greatest act of courage is to play as a team," she continued, without an overt reference to the United States.

During his three years in office, Trump has criticised many international organisations and quit some. Still, European diplomats said they were taken aback by Washington's decision to stand aside at the WHO while China is boosting its role.

"It was so striking to see Xi Jinping seizing the opportunity to open up, with broad (cooperation), and make a proposal for $2 billion, and say if ever there is a vaccine they will share it with everyone," a European diplomat said.

"It's exactly what we feared: the space liberated by Washington will be taken up by China."

The WHO declined to comment on Trump's threat to quit, saying only that it had received his letter and was considering its contents.

Tuesday's resolution calls for a review into how the novel coronavirus spread after making the jump from animals to humans, believed to have happened in the Chinese city of Wuhan last year.

Some countries including hard-hit Spain and Italy suggested the body could emerge stronger from the pandemic through reform.

"This should be a time for renewing our organisation and we renew our strong commitment to the organisation," Spanish Prime Minister Pedro Sanchez said.