There appears to be a pattern where the evolution of miniaturisation is associated with changes in ecology.

Madagascar has many “mini” creatures. These include a recently discovered group of miniaturised frogs as well as the discovery earlier this year of the smallest reptile on earth – the Brookesia nana, or nano-chameleon, which is the size of a paperclip. Moina Spooner, from The Conversation Africa, asked Dr Mark D Scherz, an amphibian and reptile specialist who focuses on Madagascar, to explain what causes these animals to miniaturise.

Madagascar is famous for its small animals; the mouse lemurs, the smallest primates on earth, for instance, are widely known. There’s also growing awareness that Madagascar is home to a variety of other uniquely miniaturised animals, especially chameleons and frogs. In those groups, researchers have discovered large numbers of tiny species in recent years.

In 2017, researchers described 26 species of Stumpffia – a group of frogs – the smallest of which is not even 1cm long at adult body size. It is one of the smallest frogs in the world.

Then, in 2019, my colleagues and I showed that several different groups of cophyline microhylids – a group of narrow-mouthed frogs that are only found in Madagascar – have become miniaturised independently. One group of these was an entirely new genus. We gave them the fitting name “Mini”, with the three species Mini mum, Mini scule, and Mini ature.

Why have they evolved to be so small?

There are probably many different reasons why these animals have evolved to be so small. For instance, it might be possible for them to exploit new resources that weren’t previously available to them. This may be new food sources, or exploring the space between leaves and tree roots that is inaccessible to larger animals.

It could also be driven by competition with other, similar species. Species may diverge into different size categories to partition their resources and avoid direct competition.

In many cases, there may be no strong or single selective force that is driving the miniaturisation at all, but instead it could simply be a process of random change in the population, which occurs in all organisms over time. This is further driven by population bottlenecks as the smaller and smaller animals get cut off from other populations.

The simple answer is that we just don’t know yet in any of the cases, and it is likely that in most it is a combination of factors. We are much better able to say what the correlates of miniaturisation are – that is, the suite of features, behaviours, and ecologies that accompany miniaturisation – than the causes. 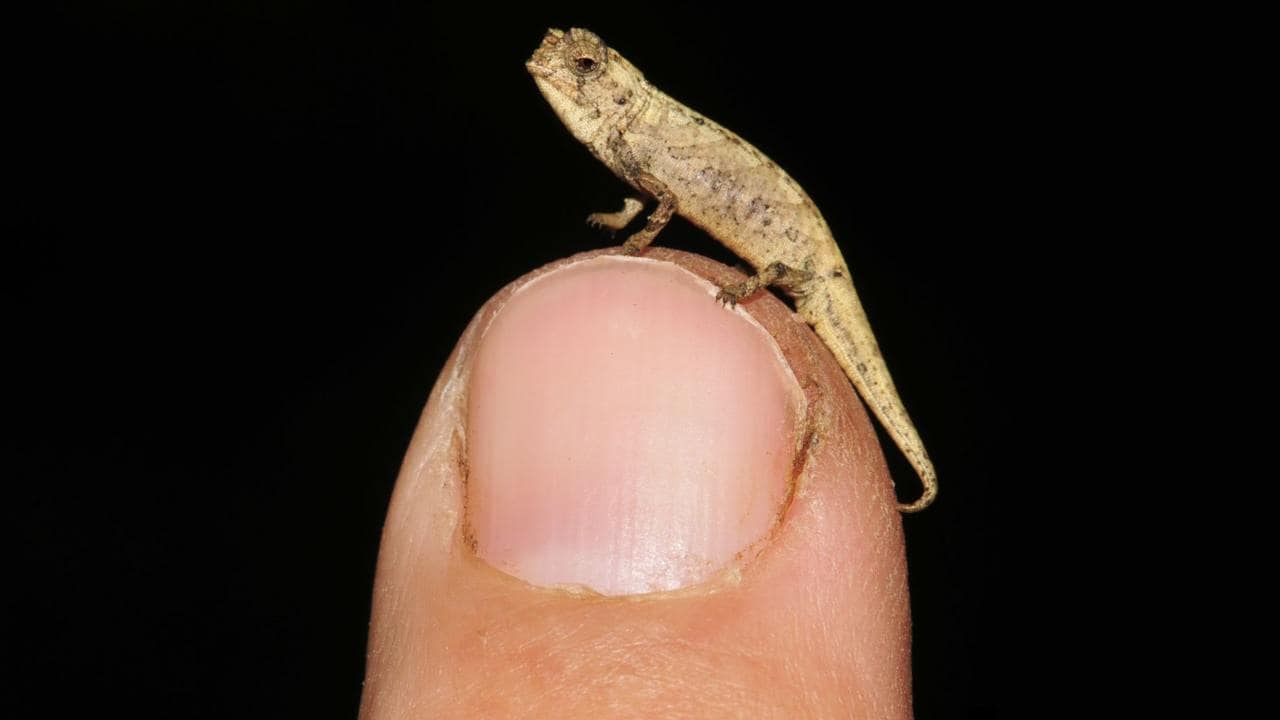 Speaking only of reptiles and amphibians, maybe, but it is hard to say for sure. South-East Asia has a massive diversity of miniaturised frogs, for instance, but whether the number of major miniaturisation events in that region is greater or less than in Madagascar is difficult to say for sure.

The same goes for Central and South America, where there are plenty of tiny amphibians and reptiles, including salamanders, frogs and lizards.

Ultimately, even though Madagascar may not be the world champion in terms of the number of miniaturised reptiles and amphibians, I think it does stand out as an exceptionally interesting place in which to study their evolution, and we are only just starting to scratch the surface of this.

What their tiny size says of their evolution

This is the question I find the most exciting. From miniaturisation we can learn all kinds of interesting things about physiology, evolution and biomechanics – how organisms move and function.

For instance, there appears to be a pattern where the evolution of miniaturisation is associated with changes in ecology. Almost all miniaturised frogs in Madagascar are terrestrial, irrespective of whether their ancestors were terrestrial arboreal (living in trees). The only conditions under which miniaturised frogs have remained arboreal throughout miniaturisation has been when they reproduce in the water cavities at the base of certain plants’ leaves, such as the Pandanus plant.

We have also learned that the microhylid frogs of Madagascar have mostly miniaturised by retaining juvenile-like characteristics, known as paedomorphosis. For instance, they all have relatively large heads and eyes for their body sizes.

Another particularly interesting finding is that miniaturisation has apparently evolved again and again in different lineages. This was already evident in frogs at the global scale (there are miniaturised frog lineages throughout the tropics). But one group of frogs in Madagascar has done this five or more times alone. This tells us that the evolution of miniaturisation can occur frequently and may be advantageous under certain circumstances.

From our work on miniaturised chameleons, we have also found that, as these lizards shrink, their genitals increase in relative size. We think that this is because the females are larger than the males. Because the male genitals must couple with those of the females for successful reproduction, and because the female is not as small as the male, the male’s genitals are constrained to remain proportional to the size of the female, even while his body size evolves to be smaller.

There are hundreds of open questions in the field of tiny vertebrate studies. We are just beginning to understand how widespread and common this trait is, how many species have done it, and how many miniaturised species remain undescribed. There is a whole miniature frontier of interesting research to be had among these tiny vertebrates, and I, for one, am excited to see what we discover next.