We may finally have an answer to how Mars' long, runout landslides are formed

The landslides and their features have been preserved for millions of years because of reduced erosion, absence of vegetation.

Some landslides on Mars seem to defy an important law of physics. “Long, runout landslides” are formed by huge volumes of rock and soil moving downslope, largely due to the force of gravity. But their power is hard to account for. With volumes exceeding that of the Empire State Building, they move at high speeds of up to 360 kilometres per hour over flat surfaces for up to tens of kilometres.

This seems to indicate that there is no or very little friction present. Friction is the fundamental physical force resisting motion of one surface sliding relative to another. The lack of friction in these long landslides – compared to normal, shorter ones – is comparable to suddenly losing traction when driving a car on a wet or icy surface: you pull the breaks, but you stop well beyond where you intended. To explain this conundrum, scientists have suggested that these landslides must have taken place at a time when the area was covered in ice. But in our recent paper, published in Nature Communications, we have come up with another answer. The results could help us protect against harmful landslides – both on Mars and on Earth.

Geologists have discussed the odd behaviour of martian landslides since they were first identified nearly half a century ago. These types of landslides have occurred on Earth in its geological history too, but because our planet is active with erosion, atmospheric weathering (wind, rain and so on), vegetation cover and plate tectonics, their evidence can be masked if not completely erased.

This is the reason why we study long, runout landslides on other planets in our solar system. There are in fact a number of advantages of doing so. On the red planet, landslides and their morphological features are well preserved for millions of years because of the reduced erosion rate and absence of vegetation and plate tectonics.

We now also have available satellite images of the surface of Mars with a resolution that is better than what we have for some regions here on Earth. As a result, we can conduct observations and measurements that are not so granted on our planet.

Valles Marineris on Mars is a 4,000km long, straight canyon, as deep as 8km. It is situated just south of the martian equator, where extraordinary examples of long, runout landslides are present. In our study, we focused on one of the best-preserved landslides – with a size similar to the entire State of Rhode Island in the US.

The landslide shows long ridges that extend in the direction of the movement for almost the entire length of the deposit. As mentioned, these ridges have previously been interpreted to be a result of underlying ice at the time of the landslide. This hypothesis is supported by the fact that similar structures have been observed on terrestrial landslides on glaciers.

Based on this similarity, the presence of the ridges on martian landslides have been used in support of the theory that Mars was once covered in ice. But the presence of glaciers and their timing at such martian latitude is hotly debated. What’s more, it is still unclear which exact mechanisms created these ridges during the ice age.

To investigate whether there may be other explanations, we made computer models of the landslide called “digital elevation” models. These are 3D representations of terrain, obtained from high-resolution satellite images and the terrain’s elevation data. From this data, we could calculate the thickness of the landslides, the length of the ridges, their height and their wavelength – that is the distance from crest to crest between two ridges next to each other.

We showed that the wavelength of the ridges is constantly two to three times the value of the thickness of the landslide. This relationship has previously only been demonstrated in laboratory experiments – which do not involve ice – and our result is the first field evidence. 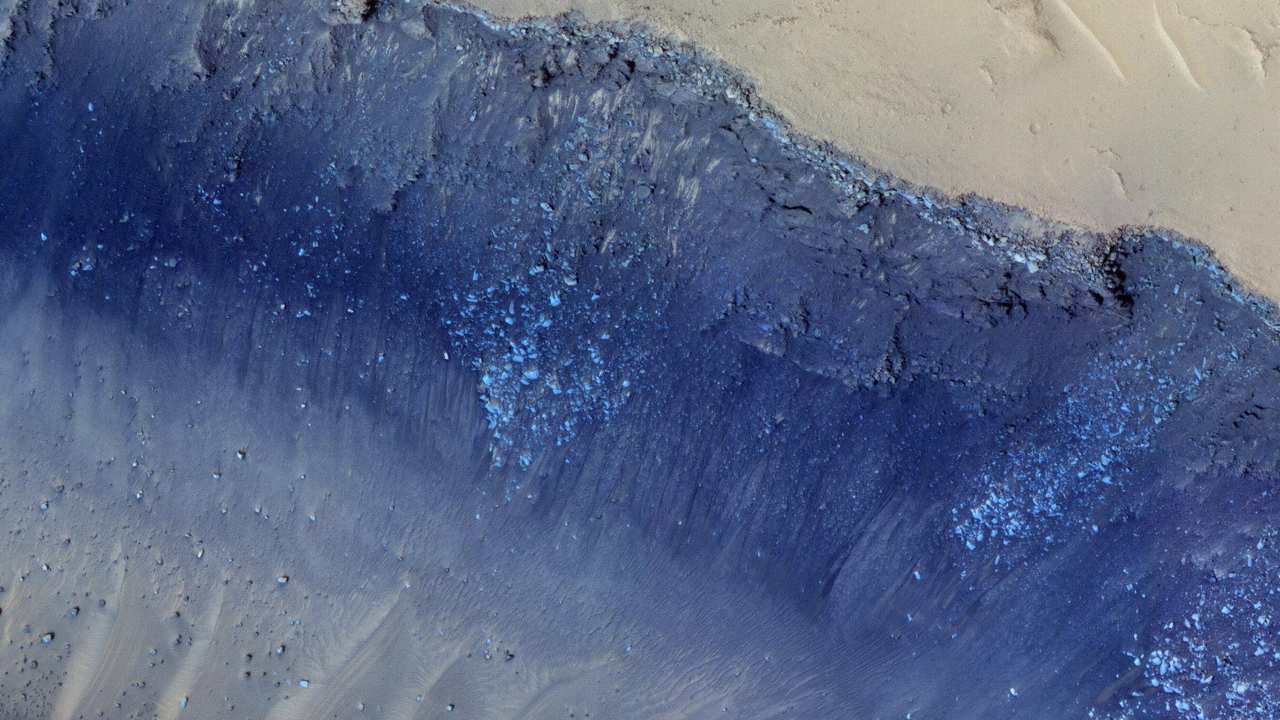 This suggests that ice is not a necessary condition for the formation of the long ridges. Instead, we propose that the ridges could have formed at high speeds due to underlying layers of unstable, light rocks. These layers would have been created by vibrations and collisions of rock particles at the bottom of the slide with the rough surface of the valley. This would have initiated a “convection process” – transfer of heat by movement – that caused upper denser and heavier layers of rock to fall and lighter rocks to rise.

Once we had accounted for this mechanical instability – and coupled it with the movement at phenomenal high speed of the slide – we could show that vortices extending in the direction of the landslide’s movement were generated, giving rise to the long ridges that we observe on the surface of the landslide.

The findings are important. On Earth, the incomplete record of such catastrophic events can lead to misinterpretations and overlooking of the hazard of these landslides. But, as they happened in the past, they will happen in the future, posing great risk to infrastructures and people lives.

Turning our look further away to understand what is near us is sometimes a fundamental change of perspective. But, as we know landslides are also still happening on Mars, these studies will set the background knowledge for risk mitigation of human settlements on Mars, no matter how far in the future they are still.