The successful trip opens doors to more people flying to space, what with companies announcing plans to use Crew Dragons to send wealthy tourists to orbit.

The first astronaut trip to orbit by a private company has splashed down safely in the Gulf of Mexico. Two astronauts dropped out of orbit in what was the first water landing by NASA since 1975, when the agency’s crews were still flying in the Apollo modules used for the historic U.S. moon missions.

Suspended under four giant billowing orange-and-white parachutes, the Crew Dragon settled into calm waters near Pensacola, Florida, at a gentle pace of 15 mph. Two small SpaceX boats arrived quickly to begin the operation to prepare the capsule to be pulled out by the main recovery ship, where crews will tend to the spacecraft’s passengers.

They are two NASA astronauts — Robert L. Behnken and Douglas G. Hurley — but the conclusion of their first voyage of nearly 64 days could be a first step to more people going to space for a variety of new activities like sightseeing, corporate research and satellite repair.

This flight of the Crew Dragon capsule was operated by SpaceX, the rocket company started by Elon Musk, as part of NASA’s efforts to turn over to private enterprise some things it used to do.

NASA has hired two companies — SpaceX and Boeing — to provide transportation of astronauts to and from the International Space Station, and SpaceX was the first to be ready to take astronauts to orbit, launching Behnken and Hurley in May. 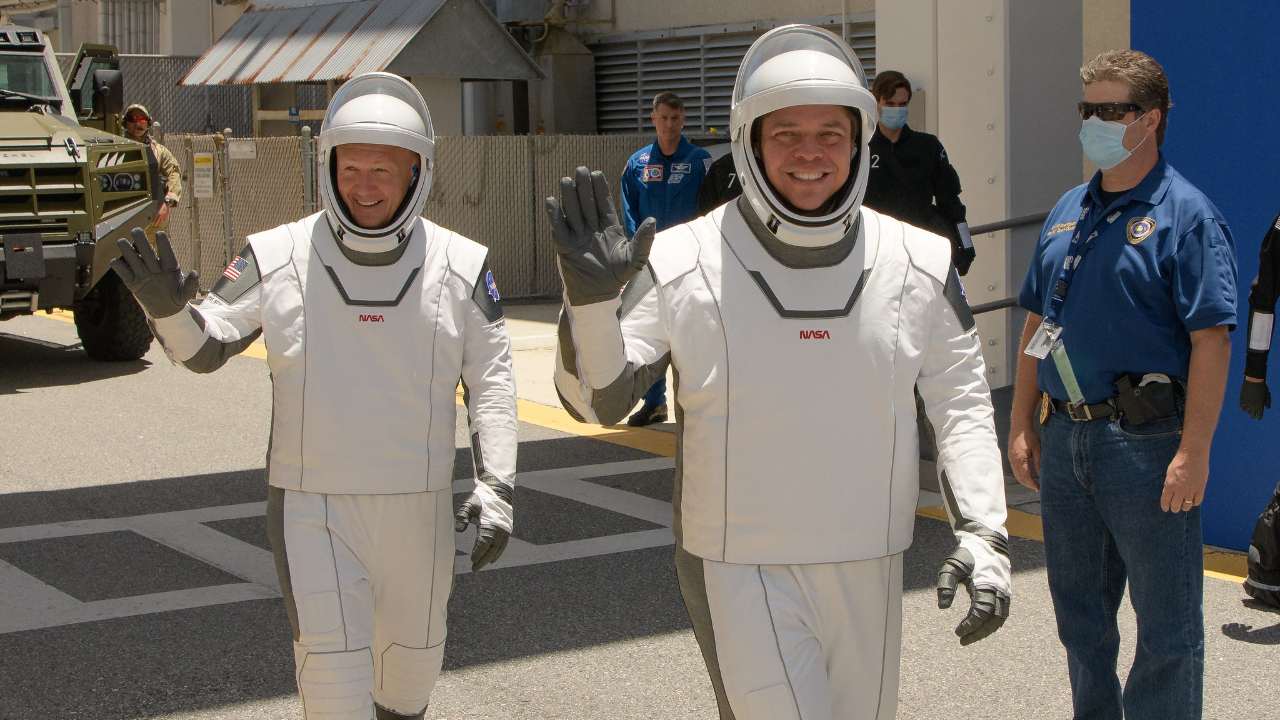 With a little help, astronauts exit the capsule

After 4 p.m., the recovery crews opened the hatch and assisted Behnken and Hurley, still in their spacesuits and giving thumbs up, to exit the capsule. Hurley thanked employees of NASA and SpaceX for their work on the spacecraft and mission.

“You should take a moment to just cherish this day, especially given all the things that have happened this year,” Hurley said as he exited the Crew Dragon.

He added that he felt “proud to be a small part of this whole effort,” to carry people to and from space.

Before the recovery ship hoisted the capsule out of the water and prepared to open the capsule’s hatch, a flotilla of small private boats piloted by onlookers also converged around the bobbing capsule. At least one of them flew a banner supporting President Donald Trump.

Personnel aboard SpaceX’s boats chased them farther away; there is a possibility of toxic propellant fumes from the spacecraft thrusters, which could endanger passengers on other vessels nearby. Detection of the fumes in fact caused a short delay in opening the hatch to release the astronauts from the capsule.

“Let’s just keep everyone safe; no reason to rush,” Hurley said to mission control of the delay.

Q: What happened as the spacecraft began to land?

A: On Saturday, the Crew Dragon performed a series of thruster burns to move away from the space station and then line up with the splashdown site.

Before leaving orbit Sunday, the spacecraft jettisoned its bottom half, known as the trunk, which will no longer be needed. That exposes the heat shield that protects the capsule and astronauts during reentry.

“Oh yeah, we felt it,” Hurley said after the maneuver was confirmed on the ground.

One more thruster burn of about 11 minutes in length was completed after 2 p.m. Eastern time, which caused the capsule to drop out of orbit, headed toward its landing site at sea.

After further maneuvers, the capsule’s parachutes brought the spacecraft to the surface of the Gulf of Mexico. Q: Is it safer to land on water or on land?

A: Spacecraft can safely return to Earth in either environment.

During the 1960s and 1970s, NASA’s Mercury, Gemini and Apollo capsules all splashed down in the ocean while Soviet capsules all ended their trips on land. Russia’s current Soyuz capsules continue to make ground landings, as do China’s astronaut-carrying Shenzhou capsules.

The last water landing by NASA astronauts occurred in July 1975 at the end of the Apollo-Soyuz mission, during which an American crew aboard an Apollo module docked in orbit with two Soviet astronauts aboard a Soyuz capsule.

While the crew splashed down safely, a problem with the Apollo spacecraft during reentry caused fumes from rocket propellant to fill the capsule, causing breathing and eye problems for the astronauts.

When Boeing’s Starliner capsule begins carrying crews to the space station, it will return on land, in New Mexico. SpaceX had originally planned for the Crew Dragon to do ground landings, but decided that water landings, employed for the earlier version of Dragon for taking cargo, simplified the development of the capsule. Musk further explained the reasoning on Twitter early Sunday:

“Parachutes were originally the backup landing system, with SuperDraco thrusters as primary,” he said. “Difficulty of proving thruster landing safety *and* architecture being suboptimal for moon/Mars caused us to change focus to parachutes.” The SpaceX Crew Dragon Endeavour spacecraft is seen as it lands with NASA astronauts Robert Behnken and Douglas Hurley onboard in the Gulf of Mexico off the coast of Pensacola, Florida Image credit: NASA/Bill Ingalls

Q: What do astronauts experience during a water landing?

A: Returning from the free-fall environment of orbit to the normal forces of gravity on Earth is often disorienting for astronauts. A water landing adds the possibility of seasickness.

During a news conference Friday, Hurley said he had read some of the reports by the Skylab astronauts. “There was some challenges post splashdown,” he said. “Folks didn’t feel well, and you know, that is the way it is with a water landing, even if you’re not deconditioned like we’re going to be.”

Hurley acknowledged that vomiting would not be unexpected.

“There are bags if you need them, and we’ll have those handy,” he said. “We’ll probably have some towels handy as well. And you know, if that needs to happen, it certainly wouldn’t be the first time that that’s happened in a space vehicle.”

But not long after the splash down, he asked SpaceX’s mission controllers to tell flight surgeons monitoring their health that, “we’re doing pretty good so far.”

Q: What have the astronauts been doing since they undocked?

Following a series of thruster firings to put the spacecraft on track with the landing site, the astronauts’ schedule included a full night of rest. The capsule even completed one of its maneuvers while the astronauts were supposed to be sleeping.

Any return journey that exceeds six hours has to be long enough for the crew to get some sleep between undocking and splashdown, Daniel Huot, a NASA spokesman, said in an email.

Otherwise, because of the extended process that leads up to undocking, the crew would end up working more than 20 hours straight, “which is not safe for dynamic operations like water splashdown and recovery,” Huot said.

On Sunday morning, the astronauts were greeted with a wake-up message sent from Earth by their two sons.

Just before noon, the astronauts began to put their SpaceX spacesuits back on as they completed preparations for landing. Private boats could be seen near the capsule during recovery. image credit: NASA/Bill Ingalls

Q: Why is the return trip an important part of the Crew Dragon’s first flight?

A: After launch, reentry through Earth’s atmosphere is the second most dangerous phase of spaceflight. Friction of air rushing past will heat the bottom of the capsule to about 3,500 degrees Fahrenheit. A test flight of the Crew Dragon last year successfully splashed down, so engineers know the system works.

A successful conclusion to the trip opens the door to more people flying to space. Some companies have announced plans to use Crew Dragons to lift wealthy tourists to orbit.

In the past, NASA astronauts launched on spacecraft like the Saturn 5 moon rocket and the space shuttles that NASA itself operated. After the retirement of the space shuttles in 2011, NASA had to rely on Russia, buying seats on the Soyuz capsules for trips to and from orbit.

Under the Obama administration, NASA hired two companies, SpaceX and Boeing, to build spacecraft to take astronauts to the space station. NASA financed much of the work to develop the spacecraft but will now buy rides at fixed prices. For SpaceX, the trip by Behnken and Hurley — the first launch of astronauts from U.S. soil since the last space shuttle flight — was the last major demonstration needed before NASA officially certifies that the Crew Dragon is ready to begin regular flights.

Q: Who are the astronauts?

A: Behnken and Hurley have been friends and colleagues since both were selected by NASA to be astronauts in 2000.

Both men have backgrounds as military test pilots and each has flown twice before on space shuttle missions, although this is the first time they have worked together on a mission. Hurley flew on the space shuttle’s final mission in 2011.

In 2015, they were among the astronauts chosen to work with Boeing and SpaceX on the commercial space vehicles that the companies were developing. In 2018, they were assigned to the first SpaceX flight. 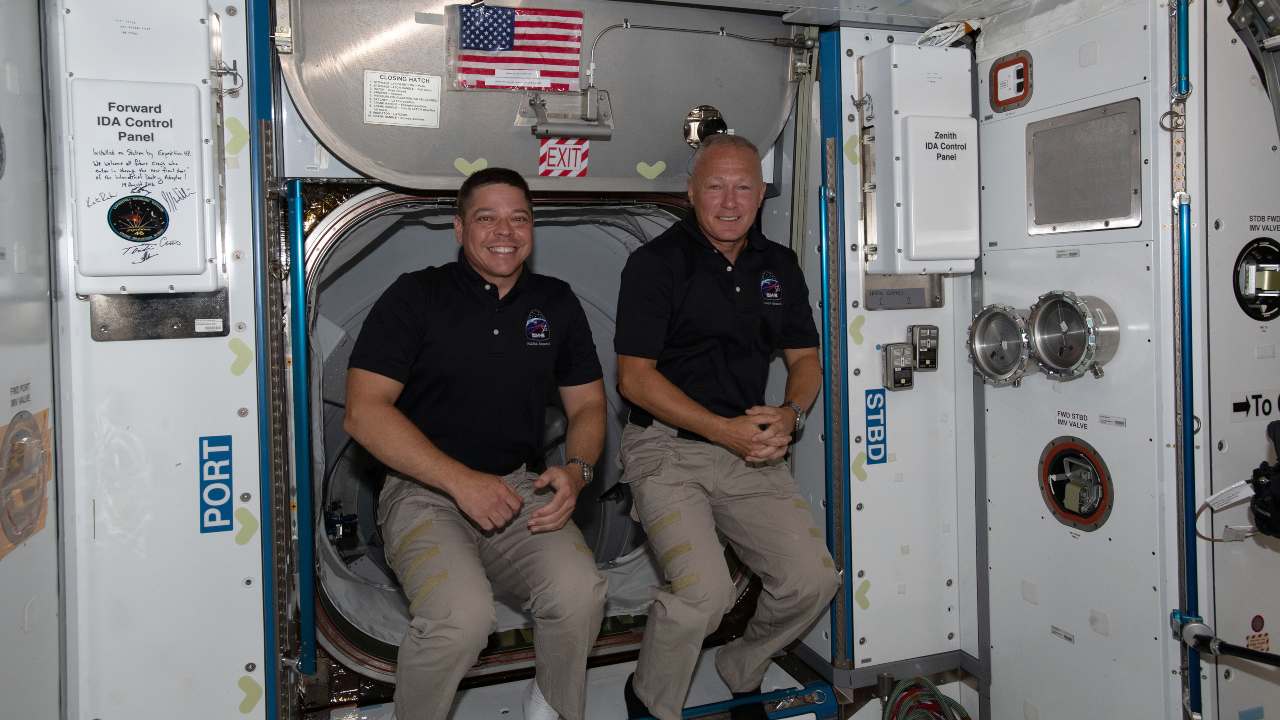 Astronauts Bob Behnken, left, and Doug Hurley, after having just entered the orbiting lab of the Space Station shortly after their arrival on the SpaceX Crew Dragon spacecraft in May 2020. Image: NASA

Q: What have the astronauts been doing aboard the space station?

A: Originally, the mission was to last up to two weeks, but Behnken and Hurley ended up with a longer and busier stay at the space station. Because of repeated delays by SpaceX and Boeing, NASA ended up short-handed, with only one astronaut, Christopher J. Cassidy, aboard the space station when the Crew Dragon and its two passengers docked.

The men have also been contributing to science experiments in low Earth orbit. They assisted in a study of water droplet formation in the low gravity environment of the space station using a shower head, and another that used fruit punch and foam to look at how to manage fluids in space. They also helped install new equipment inside the station that will be used in future scientific research.

Q: When are the next Crew Dragon flights, and who will they carry?

A: The first operational flight of the Crew Dragon will launch no earlier than late September. It will take three NASA astronauts — Michael S. Hopkins, Victor J. Glover and Shannon Walker — and one Japanese astronaut, Soichi Noguchi, to the space station.

McArthur is married to Behnken.

Q: Which other companies are building rides to space?

A: SpaceX’s counterpart in the commercial crew program, Boeing, will almost certainly not be able to launch astronauts until next year. An uncrewed flight last year suffered significant software errors, which prevented the spacecraft from achieving its primary goal of docking at the space station, and could have led to a loss of the spacecraft during its orbital test. Boeing will now repeat the uncrewed test later this year before putting astronauts aboard.

Closer to Earth, a couple of companies — Blue Origin and Virgin Galactic — are developing spacecraft that provide brief up-and-down tourist rides to the edge of space, although neither is capable of making the trip to the space station, or even to orbit.