Uranus, the only planet to spin on its side, was pushed over by a rock at least twice Earth's size.

Uranus is a lopsided oddity, the only planet to spin on its side. Scientists now think they know how it got that way: It was pushed over by a rock at least twice as big as Earth.

Detailed computer simulations show that an enormous rock crashed into the seventh planet from the sun, said Durham University astronomy researcher Jacob Kegerreis, who presented his analysis at a large earth and space science conference this month.

Uranus is unique in the solar system. The massive planet tilts about 90 degrees on its side, as do its five largest moons. Its magnetic field is also lopsided and doesn’t go out the poles like ours does, said NASA chief scientist Jim Green. It also is the only planet that doesn’t have its interior heat escape from the core. It has rings like Saturn, albeit faint ones. 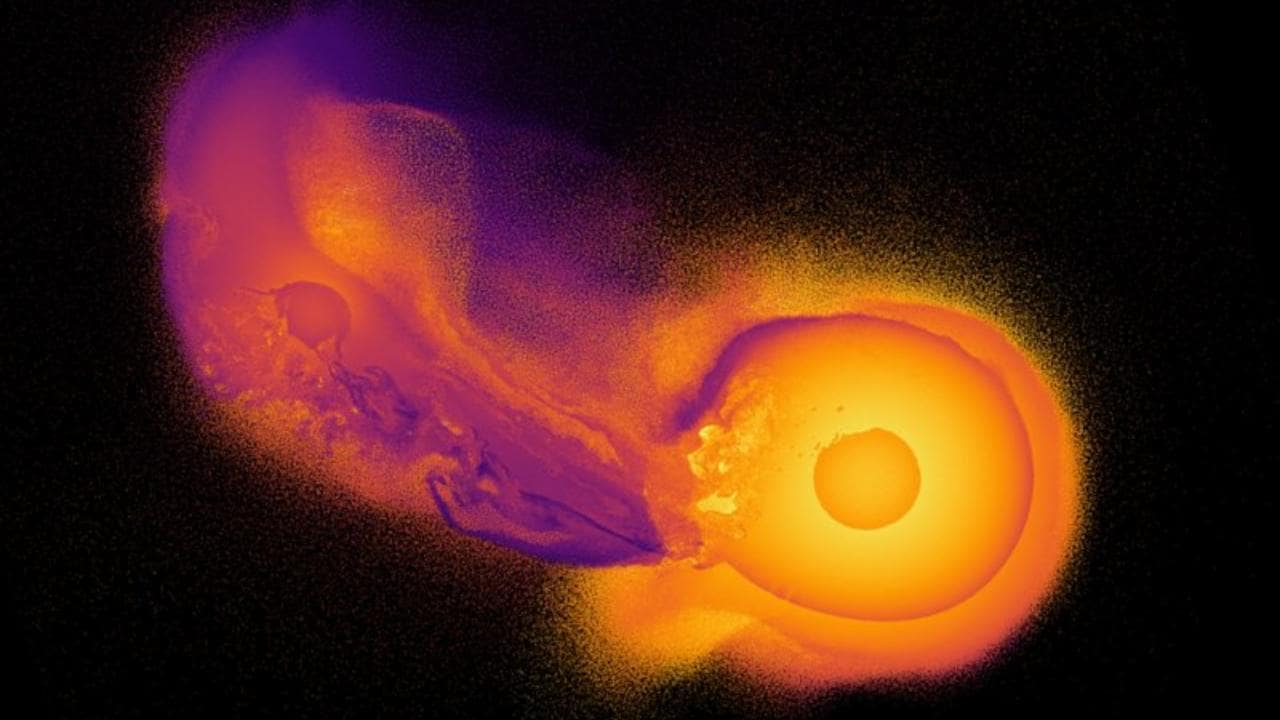 This image shows a computer simulation depicting an object crashing into Uranus. The full simulations show that the collision and reshaping of Uranus 3 billion to 4 billion years ago, likely caused the massive planet to tilt about 90 degrees on its side. Image courtesy: Durham University

The computer simulations show that the collision and reshaping of Uranus — maybe enveloping some or all of the rock that hit it — happened in a matter of hours, Kegerreis said. He produced an animation showing the violent crash and its aftermath.

It’s also possible that the big object that knocked over Uranus is still lurking in the solar system too far for us to see, said Green. It would explain some of the orbits of the planet and fit with a theory that a missing planet X is circling the sun well beyond Pluto, he said.

Green said it’s possible that a lot of smaller space rocks — the size of Pluto — pushed Uranus over, but Kegerreis’ research and Sheppard point to a single huge unknown suspect. Green said a single impact “is the right thinking.”

The collision happened 3 billion to 4 billion years ago, likely before the larger moons of Uranus formed. Instead there was a disk of stuff that would eventually come together to form moons. And when that happened, Uranus’ odd tilt acted like a gravity tidal force pushing those five large moons to the same tilt, Kegerreis said.

It also would have created an icy shell that kept Uranus’ inner heat locked in, Kegerreis said. (Uranus’ surface is minus 357 degrees, or minus 216 Celsius.)

Ice is key with Uranus and its neighbor Neptune. A little more than a decade ago, NASA reclassified those two planets as “ice giants,” no longer lumping them with the other large planets of the solar system, the gas giants Saturn and Jupiter.

Pluto, which is tiny, farther from the sun and not even officially a planet anymore, has been explored more than Uranus and Neptune. They only got brief flybys by Voyager 2, the space probe that entered interstellar space last month. Hubble spots an aurora on Uranus in 2011. Image courtesy: NASA

But that may change. A robotic probe to one or both of those planets was high up on the last wish-list from top planetary scientists and likely will be at or near the top of the next list.

Uranus was named for the Greek god of the sky. Its name often generates juvenile humor when it is wrongly pronounced like a body part. (It’s correctly pronounced YUR’-uh-nus.)

“No one laughs when I say Uranus,” NASA’s Green said. “They have to mispronounce it to get the chuckles.”