The explosion of sea urchins is the latest symptom of a marine ecosystem that’s out of whack in the Pacific Northwest.

Tens of millions of voracious purple sea urchins that have already chomped their way through towering underwater kelp forests in California are spreading north to Oregon, sending the delicate marine ecosystem off the shore into such disarray that other critical species are starving to death.

A recent count found 350 million purple sea urchins on one Oregon reef alone — more than a 10,000 percent increase since 2014. And in Northern California, 90 percent of the giant bull kelp forests have been devoured by the urchins, perhaps never to return.

Vast “urchin barrens” — stretches of denuded seafloor dotted with nothing but hundreds of the spiny orbs — have spread to coastal Oregon, where kelp forests were once so thick it was impossible to navigate some areas by boat.

The underwater annihilation is killing off important fisheries for red abalone and red sea urchins and creating such havoc that scientists in California are partnering with a private business to collect the over-abundant purple urchins and “ranch” them in a controlled environment for ultimate sale to a global seafood market. 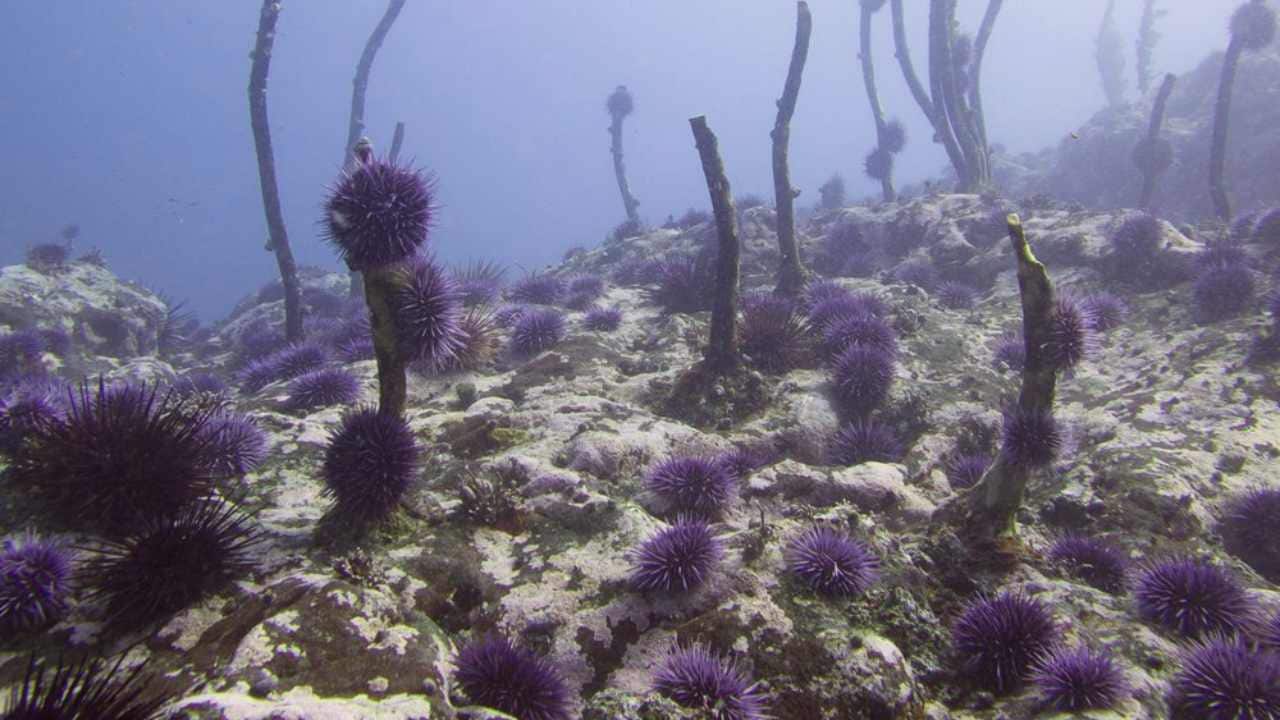 The invasion has sent the delicate marine ecosystem off the shore into such disarray that other critical species are starving to death. Image: AP

"We’re in uncharted territory," said Scott Groth, a shellfish scientist with the Oregon Department of Fish and Wildlife. “You can’t just go out and smash them. There’s too many. I don’t know what we can do.”

The explosion of purple sea urchins is the latest symptom of a Pacific Northwest marine ecosystem that’s out of whack.

Kelp has been struggling because of warmer-than-usual waters in the Pacific Ocean. And, in 2013, a mysterious disease began wiping out tens of millions of starfish, including a species called the sunflower sea star that is the only real predator of the ultra-hardy purple urchin. Around the same time, the purple urchins had two excellent breeding years — and with no predators, those gametes grew up and are now eating everything in sight.

“You can imagine all of these small urchins growing up, each one of them looking for food, desperate for food. They’re literally starving out there,” said Steven Rumrill, lead shellfish expert at Oregon’s wildlife agency. “I’ve seen some big-scale fluctuations in the populations of sea stars and urchins, but never on this magnitude.”

Scientists are not yet sure if climate change is responsible for the sea urchin explosion, but they suspect it plays a role in the cascade of events that allowed the purple urchins to boom. And kelp, already under siege from warming waters, is not as resilient as it once was, said Norah Eddy, an associate director at the Nature Conservancy California’s oceans program.

“We’re going to see climate change as a big driver of changes in kelp forest as we move forward, and we are already seeing that,” said Eddy, who is leading an effort to use drones to map and monitor Northern California’s last remaining kelp forests.

The devastation is also economic: Until now, red abalone and red sea urchins, a larger and meatier species of urchin, supported a thriving commercial fishery in both states. But 96 percent of red abalone have disappeared from California’s northern coast as the number of purple sea urchins increased six fold, according to a study released this week by the University of California, Davis.

Last year, California closed its red abalone fishery, which poured an estimated $44 million into the coastal economy per year, and Oregon suspended permits for its 300 abalone divers for three years. The commercial harvest of red sea urchins in California and Oregon also has taken a massive hit. This photo, taken on 26 September 2019, shows an aerial view of one of the last remaining kelp forests near Elk, Calif., on the Mendocino County coast, which has lost more than 90 percent of its bull kelp in less than a decade. Image: AP

“That’s a huge economic loss for our small coastal communities,” said Cynthia Catton, a research associate with the University of California, Davis Bodega Marine Lab. “In California, there were 30,000 to 40,000 participants in (the abalone) fishery every year for decades, and for the first time ever that fishery had to close.”

And while the purple urchins have eaten themselves into starvation as well, unlike other kelp-dependent creatures, the species can go into a dormant state, stop reproducing and live for years with no food.

That means the only way to restore the kelp is to remove or destroy the purple urchins. Scientists estimate that in Oregon alone, it would take 15 to 20 years to remove all 100 million pounds (45 million kilograms) of purple urchins recently surveyed on just one large reef.
While urchins are in starvation mode, the edible part — known as roe — shrivels, making them commercially worthless.

Against this backdrop, conservationists, commercial urchin harvesters, scientists and private interests are coming together with an unusual plan: Pay underemployed red sea urchin divers to collect the shriveled, but living, purple sea urchins and transfer them to carefully tended urchin “ranches” to be fattened up for sale to seafood markets around the world. Tens of millions of voracious purple sea urchins that have already chomped their way through towering underwater kelp forests in California are now spreading north to Oregon. Image: AP

One company, Urchinomics, is already working on urchin ranching projects in Japan, Canada and California and sees a future where the overwhelming demand for wild urchin roe is replaced by a taste for human-raised purple urchins collected from the seafloor, allowing kelp forests to rebound.

In Oregon, red urchin divers are a tiny artisanal collective, but they are also exploring ways to try to turn the glut of destructive purple urchins to their advantage. Oregon’s urchin fishery had a boom year last year, when red urchins were scarce in California but before their purple cousins had spread north. Now, they too are hurting.
Rumrill, the shellfish expert from Oregon, supports efforts to harvest excess urchins but strikes a less optimistic note when it comes to saving the kelp.

“That’s a promising technique. But we shouldn’t fool ourselves into thinking that we’re going to solve this large-scale ecological problem, this literal perfect storm of events, by eating our way out,” he said. “It’s just too big a problem."