Understanding exoplanets: Unraveling the mysteries of planets that are hotter than stars

Kelt-9 b might've formed away from its parent star and had a violent past with collisions happening as it migrated inwards.

Until the early 2000s, the only known planets were located in our own neighbourhood, the Solar System. They broadly form two categories: the small rocky planets in the inner Solar System and the cold gaseous planets located in the outer part. With the discovery of exoplanets, planets orbiting stars other than the Sun, additional classes of planets were discovered and a new picture started to emerge. Our Solar System is by no means typical. For example, data from the Kepler mission has shown that large, gaseous exoplanets can orbit very close to their star – rather than far away from it, as is the case in our Solar System, causing them to reach temperatures exceeding 1,000K (727°C). These have been dubbed “hot” or “ultra-hot” Jupiters. And while most other exoplanets are smaller, between the size of Neptune and Earth, we don’t know much about their composition. 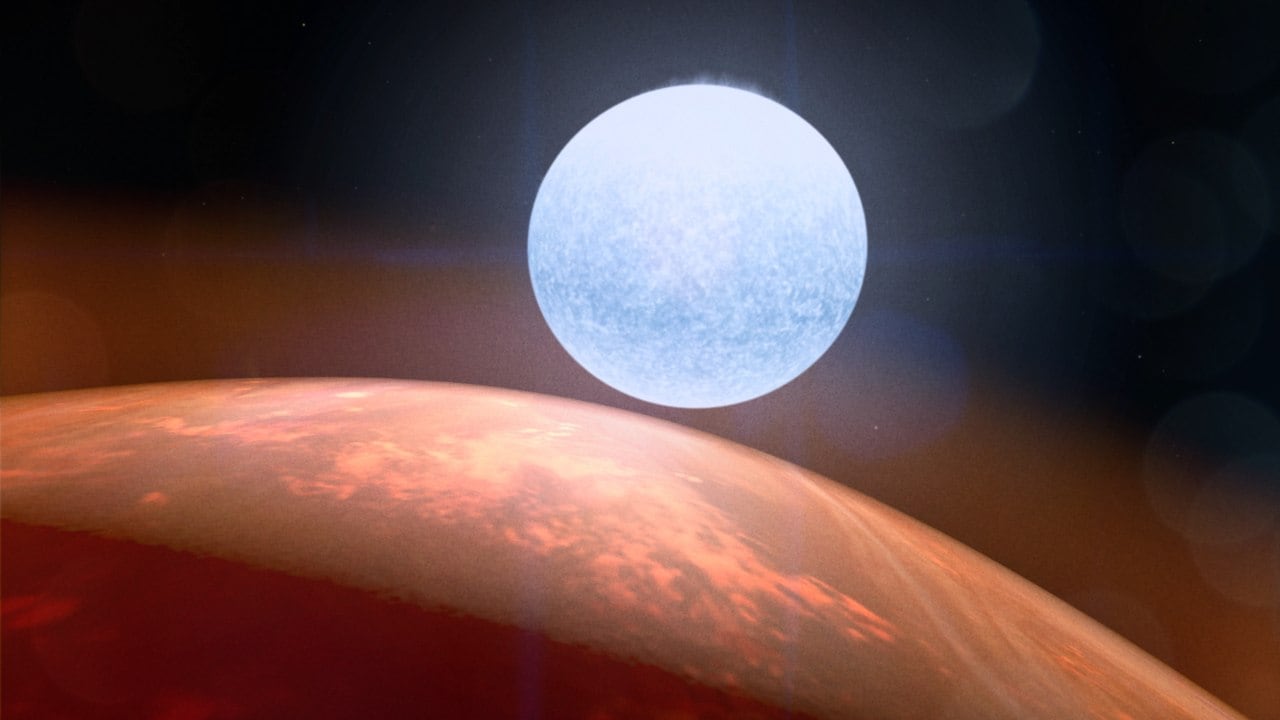 This illustration shows how planet KELT-9 b sees its host star. Over the course of a single orbit, the planet twice experiences cycles of heating and cooling caused by the star’s unusual pattern of surface temperatures. So every 36 hours, KELT-9 b experiences two summers and two winters. Credit: NASA's Goddard Space Flight Center/Chris Smith (USRA)

But how can hot, gaseous planets form and exist so close to their star? What kind of extreme physical processes happen here? Answers to those questions have large implications in our understanding of exoplanets and solar system planets. In our recent study, published in The Astrophysical Journal Letters, we have added another piece to the puzzle of planet formation and evolution.

The hottest exoplanet known so far is Kelt-9 b, which was discovered in 2016. Kelt-9 b orbits a star that is twice as hot as our Sun, at a distance ten times closer than Mercury orbits our star. It is a large gaseous exoplanet, with a radius 1.8 times that of Jupiter and temperatures reaching 5,000K. For comparison, this is hotter than 80% of all the stars in the universe and a similar temperature to our Sun.

In essence, hot Jupiters are a window into extreme physical and chemical processes. They offer an incredible opportunity to study physics in environmental conditions that are near impossible to reproduce on Earth. Studying them enhances our understanding of chemical and thermal processes, atmospheric dynamics and cloud formation. Understanding their origins can also help us improve planetary formation and evolution models.

We are still struggling to explain how planets form and how elements, such as water, were delivered to our own Solar System. To find out, we need to learn more about exoplanet compositions by observing their atmospheres.

There are two main methods to study exoplanet atmospheres. In the transit method, we can pick up stellar light that is filtered through the exoplanet’s atmosphere when it passes in front of its star, revealing the fingerprints of any chemical elements that exist there.

The other method to investigate a planet is during an “eclipse” when it passes behind its host star. Planets also emit and reflect a small fraction of light, so by comparing the small changes in the total light when the planet is hidden and visible, we can extract the light coming from the planet.

Both types of observations are performed at different wavelengths or colours, and since chemical elements and compounds absorb and emit at very specific wavelengths, a spectrum (light broken down by wavelength) can be produced for the planet to infer the composition of its atmosphere.

The secrets of Kelt-9 b

In our study, we used publicly available data, taken by the Hubble Space Telescope, to obtain the eclipse spectrum of this planet.

We then used open-source software to extract the presence of molecules and found there were plenty of metals (made from molecules). This discovery is interesting as it was previously thought that these molecules would not be present at such extreme temperatures – they would be broken apart into smaller compounds. 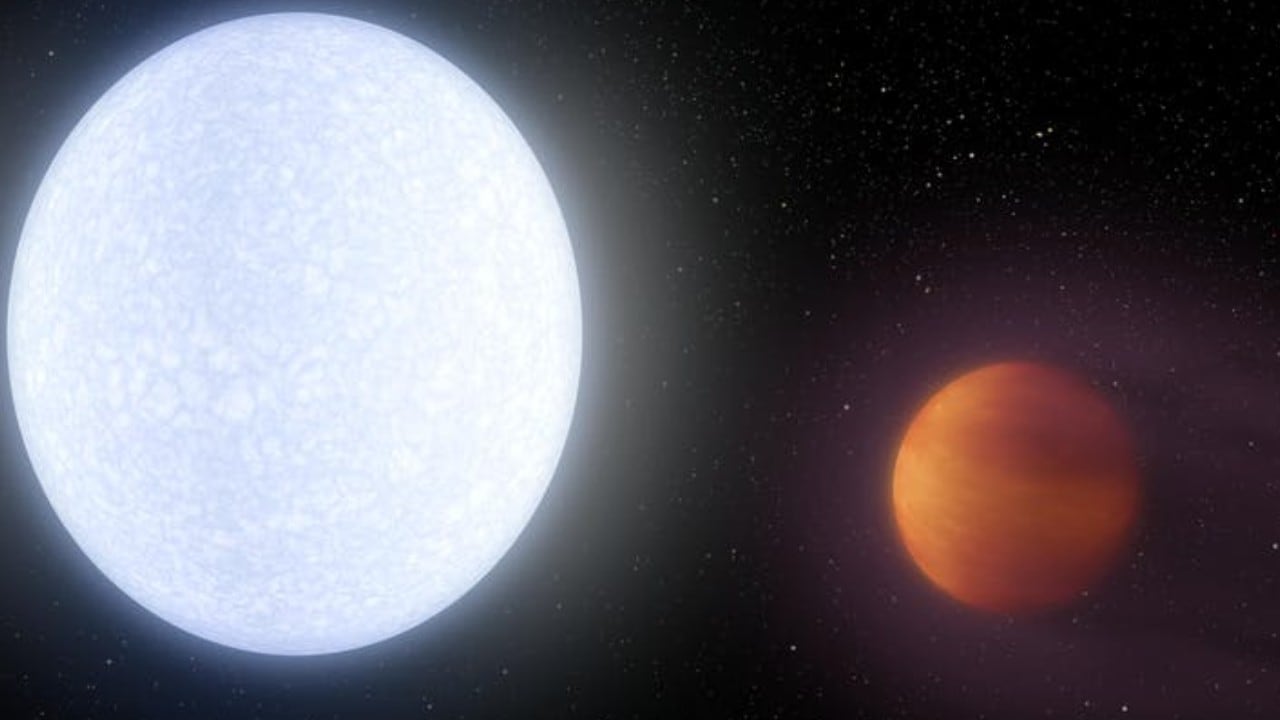 Artist’s impression of Kelt-9 b orbiting its parent star. NASA/JPL-Caltech

Subject to the strong gravitational pull from its host star, Kelt-9 b is “tidally locked”, which means that the same face of the planet permanently faces the star. This results in a strong temperature difference between the planet’s day and night sides. As the eclipse observations probe the hotter day-side, we suggested that the observed molecules could in fact be dragged by dynamic processes from the cooler regions, such as the night-side or from deeper in the interior of the planet. These observations suggest that the atmospheres of these extreme worlds are ruled by complex processes that are poorly understood.

Kelt-9 b is interesting because of its inclined orbit of about 80 degrees. This suggests a violent past, with possible collisions, which in fact is also seen for many other planets of this class. It is most likely that this planet formed away from its parent star and that the collisions happened as it migrated inwards toward the star. This supports the theory that large planets tend to form away from their host star in proto-stellar disks – which give rise to solar systems – capturing gaseous and solid materials as they migrate toward their star.

But we don’t know the details of how this happens. So it is crucial to characterise many of these worlds to confirm various scenarios and better understand their history as a whole.

Observatories, such as the Hubble Space Telescope, were not designed to study exoplanet atmospheres. The next generation of space telescopes, such as the James Webb Space Telescope and the Ariel mission, will have much better capabilities and instruments specifically tailored for the rigorous observation of exoplanet atmospheres. They will allow us to answer many of the fundamental questions raised by the extremely hot-Jupiter planet class, but they will not stop there.

This new generation of telescopes will also probe the atmosphere of small worlds, a category that current instruments struggle to reach. In particular, Ariel, which is expected to launch in 2029, will observe about 1,000 exoplanets to tackle some of the most fundamental questions in exoplanet science.

Ariel will also be the first space mission to look in details at the atmosphere of these worlds. It should finally tell us what these exoplanets are made of and how they formed and evolved. This will be a true revolution.