Cyclogensis is a complex phenomenon which is initiated by a tropical depression.

Indian Meteorological Department's (IMD) press release from 1 pm on 28 April clearly states that cyclone Fani will strengthen into a severe and then very severe cyclonic storm within the following 24 hours. By 9.30 am of 29 April, Fani has already turned into a very severe storm. As expected, it has drifted northwest towards the coast of Tamil Nadu, but Fani is still over 1,000 km from the mainland and is expected to remain over the ocean for several days. It should be noted that only about 30 percent of the cyclones over the Bay form during the pre-monsoon season and the rest form after the monsoon season is over. Sea surface temperatures over the Bay remain above 28°C, which is the threshold for atmospheric deep convection. Such warm temperatures, especially the heat content of the upper ocean, serve as the energy source for cyclones. 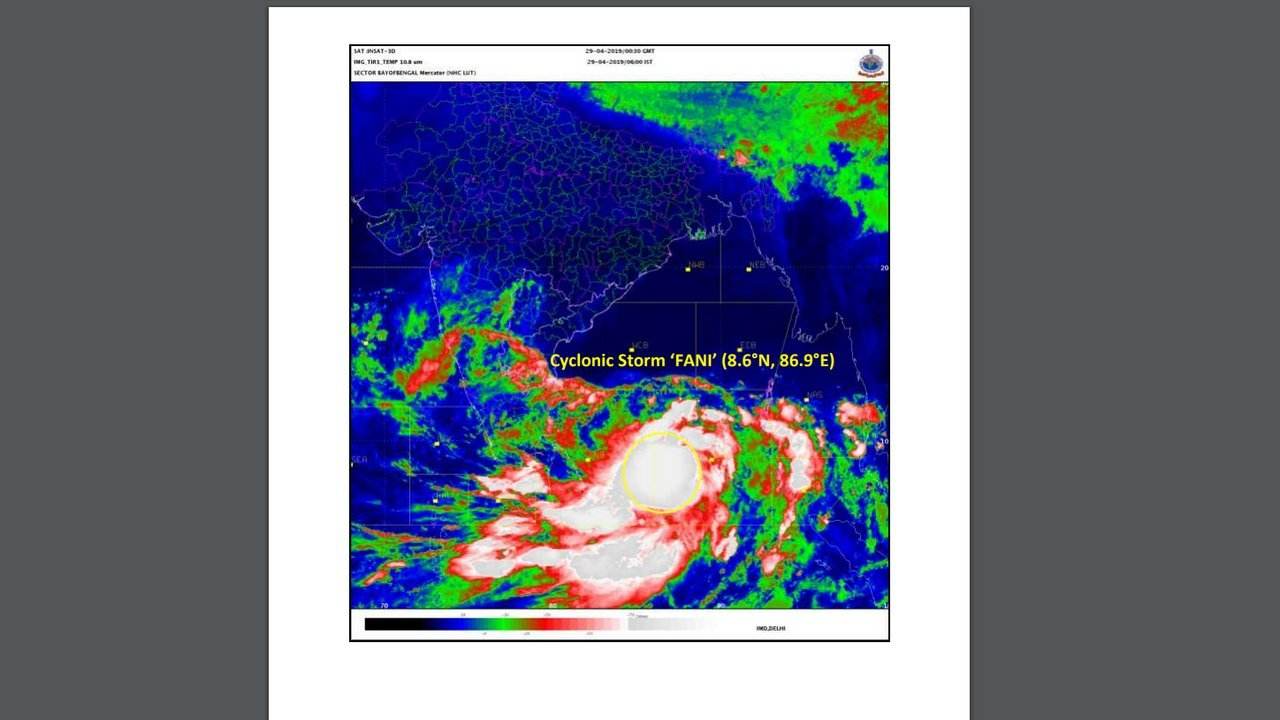 Cyclogensis is a complex phenomenon which is initiated by a tropical depression which can grow into a tropical storm and a severe or very severe storm based on the available cyclone heat potential in the ocean. Sufficiently warm weather can result in a higher rate of evaporation and pumps moisture into the cyclone. It is the condensation of this massive amount of water vapour that makes storms so powerful and can lead to extreme amounts of rain when these storms hit land. This is also why cyclones fall apart when they hit land, since they have no more moisture and energy source.

The other factor that is critical for depressions to grow into tropical storms or cyclones is the change in wind strength or direction with height in the atmosphere. Strong changes in strength or direction can rip off the head of the cyclone and prevent it from gaining strength. This is what suppresses cyclogenesis during the monsoon season.

The moisture supply to the cyclone is also enhanced by the so-called Findlater jet, the south-westerly winds trucking in boatloads of moisture across the equator in the western Indian Ocean over to the Arabian Sea and then into India over the Western Ghats. When a cyclone forms over the Bay of Bengal, the moisture demand is so strong that the Findlater jet is dragged to become more eastward from its usual north-eastward tilt. All these factors complicate the cyclone development process as well as predictions of its track more than two to three days in advance.

History says that Bangladesh has a peak in cyclone strikes in May and November whereas Myanmar has a peak in May. Since cyclones usually head northeast after approaching the Indian coast, India may yet avoid a direct strike even though it’s too early to make this call with great confidence. IMD forecasts have already suggested that Tamil Nadu and Puducherry will get very hot but are unlikely to receive heavy rains from Fani. In the Atlantic and Pacific Oceans, massive high pressure centres called subtropical highs play a role in steering hurricanes and typhoons as well. The Bay has no such strong high pressure centre, which makes the cyclones wander a bit more unpredictably. On the other hand, the expanse of the Bay is also much smaller compared to the Pacific and Atlantic Oceans, which keeps tropical storms from gaining the kind of strength observed for some of the super typhoons and massive hurricanes.

The Bay of Bengal also responds differently to global warming since its temperatures are already above the convective threshold. Any attempt to warm it will only drive more convection to get rid of the excess energy. The impact of these regional idiosyncrasies on the number and strength of cyclones is yet to be understood. The Arabian Sea is cooler and has room to warm and is showing an increase in the number of post-monsoon cyclones.

In the meantime, we need to sit tight and watch Fani closely and hope to receive the beneficial rains it brings and pray that it won’t cause any damage to life, property and infrastructure. IMD will continue to issue regular updates and INCOIS will track the waves, swells, and storm surges emanating from Fani even though it is over a 1,000 km away.