The observation is 'the best evidence yet' of a trio of supermassive black holes in apparently merging galaxies.

As of today, researchers accepted that galaxies, along with the enormous black holes at their centres, evolved over time as they merged with one another. This is the most widely-accepted theory about predicting the universe's evolution. 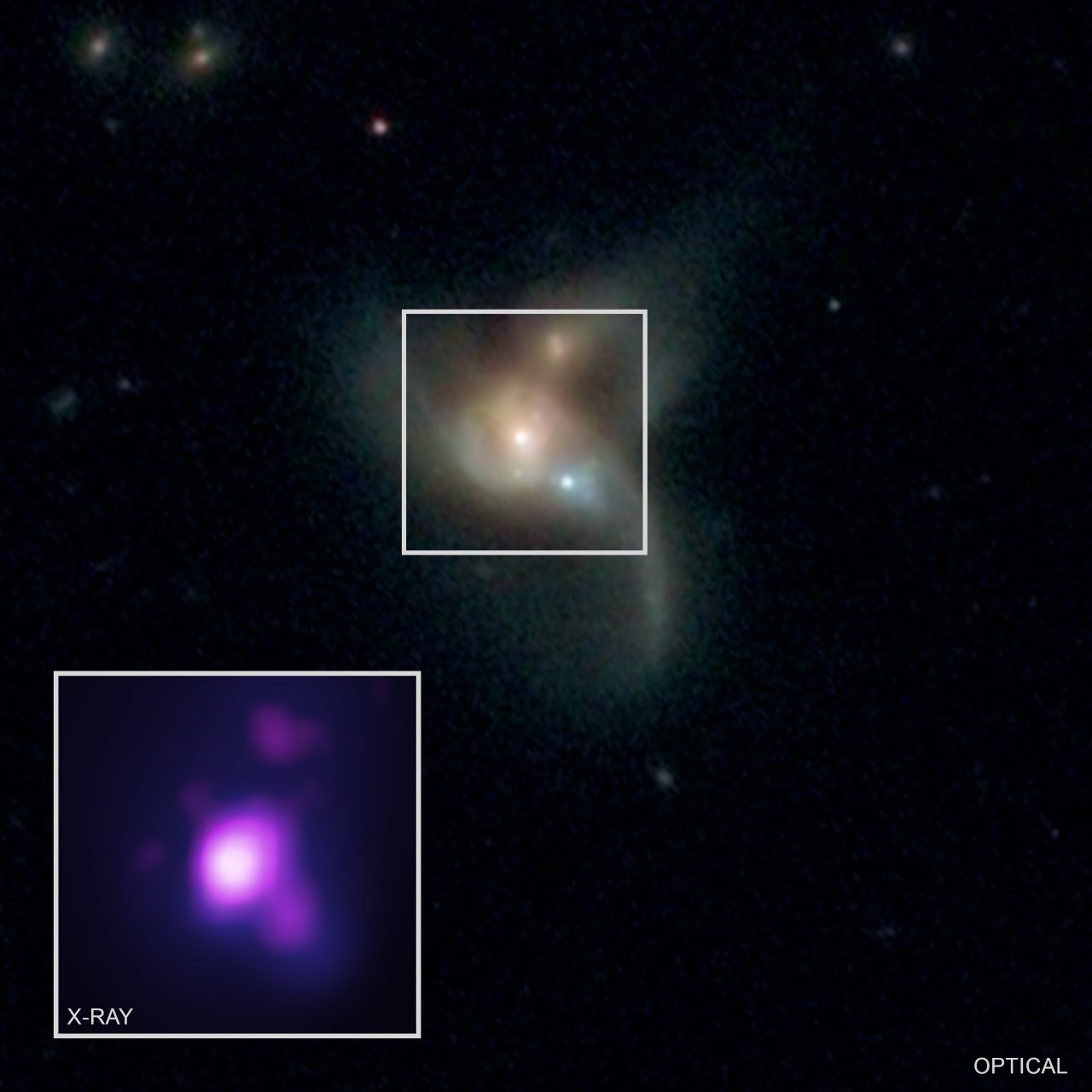 "We were only looking for pairs of black holes at the time, and yet, through our selection technique, we stumbled upon this amazing system," Ryan Pfeifle from George Mason University in Virginia, the first author of the paper, said in a statement. "This is the strongest evidence yet found for such a triple system of actively-feeding supermassive black holes."

The system, dubbed SDSS J084905.51+111447.2 (SDSS J0849+1114 for short), is a billion or so light-years away. Combining data from ground- and sky-based telescopes, astronomers spotted the rare black hole trifecta from multiple different observatories. The Sloan Digital Sky Survey (SDSS) telescope, which scans large swaths of the sky in optical light from New Mexico, captured SDSS J0849+1114 in . Citizen scientists participating in a project called Galaxy Zoo helped identify and tag it a system of colliding galaxies.

NASA's Wide-field Infrared Survey Explorer (WISE) mission also provided data that revealed an intense glow of the system in an infrared light telescope. The light reaching Earth suggests that in the merger, at least two of the three black holes were feeding rapidly. Astronomers also turned to NASA's Chandra X-Ray telescope and the Large Binocular Telescope (LBT) in Arizona for more details.

Data from Chandra showed X-ray sources in the merger — a tell-tale sign of material being consumed by the black holes at the bright centres of each galaxy in the merger — exactly where scientists expect supermassive black holes to reside. Chandra and NASA's Nuclear Spectroscopic Telescope Array (NuSTAR) satellite, both found evidence for large amounts of gas and dust circling one of the black holes, which is a very typical phenomenon in merging black holes, according to NASA's statement.

This circling cloud gas and dust block out much of the spectacle's light, making them fairly tricky to spot. WISE and Chandra (which see in X-ray and infrared spectra, respectively) can bypass this challenge since infrared and X-ray pierce clouds of gas with a lot more ease than optical light does.

"Through the use of these major observatories, we have identified a new way of identifying triple supermassive black holes. Each telescope gives us a different clue about what's going on in these systems," Pfeifle said in a statement.

"Dual and triple black holes are exceedingly rare," Shobita Satyapal, the study's co-author, said. "But such systems are actually a natural consequence of galaxy mergers, which we think is how galaxies grow and evolve."

The paper describing these results appears in The Astrophysical Journal.