These dwarf galaxies have black holes that are about 4,00,000 times the mass of our Sun.

Astronomers have discovered 13 dwarf galaxies containing massive black holes. The hope is that in studying these galaxies, astronomers can understand how black holes form, especially in the early years of the universe's existence.

The galaxies are less than a billion light-years away from the Earth, and a hundred times smaller than our own Milky Way galaxy. All of them have a black hole at its center. However, these dwarf galaxies have black holes that aren't proportionate in size. The black holes are massive — roughly 4,00,000 times the mass of our Sun. 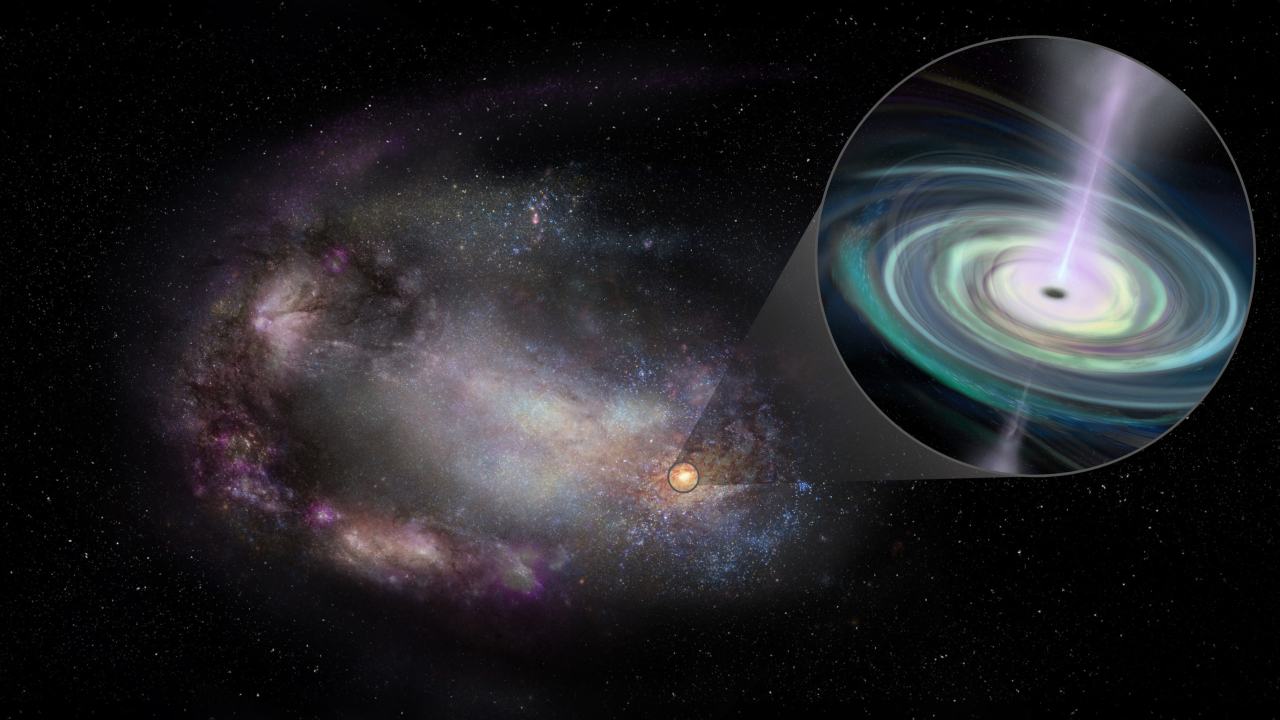 Artist's conception of a dwarf galaxy, its shape distorted, most likely by a past interaction with another galaxy, and a massive black hole in its outskirts (pullout). The black hole is drawing in material that forms a rotating disk and generates jets of material propelled outward. Image Credit: Sophia Dagnello/NRAO/AUI/NSF

In 2011, Montana State University scientist Amy Reines and her team found the first evidence of a massive black hole in a dwarf galaxy. This spurred their study on, leading them to explore galaxies from the NASA-Sloan Atlas — a catalog of images and parameters of local galaxies sourced from the Sloan Digital Sky Survey and Galaxy Evolution Explorer (GALEX) data to study objects in the ultraviolet spectrum. The team of astronomers chose a total of 111 galaxies, with all the stars collectively adding up to three billion times the sun's mass.

They discovered that the black holes in 13 dwarf galaxies weren't positioned in the center as they are in larger ones (with massive or supermassive black holes). These galaxies, the researchers think, merged with other galaxies earlier in their lives, and are found wandering in the outskirts of their galaxies.

"We hope that studying them and their galaxies will give us insights into how similar black holes in the early Universe formed and then grew, through galactic mergers over billions of years, producing the supermassive black holes we see in larger galaxies today, with masses of many millions or billions of times that of the Sun," Reines said in a statement.

The team will present their study's findings at the American Astronomical Society’s meeting in Honolulu, Hawaii.