The meaning to life? A Darwinian existentialist has his answers

When I meet my nonexistent God, I shall say to Him: ‘God, you gave me talents and it’s been a hell of a lot of fun using them. Thank you.’

I was raised as a Quaker, but around the age of 20 my faith faded. It would be easiest to say that this was because I took up philosophy – my lifelong occupation as a teacher and scholar. This is not true. More accurately, I joke that having had one headmaster in this life, I’ll be damned if I want another in the next. I was convinced back then that, by the age of 70, I would be getting back onside with the Powers That Be. But faith did not then return and, as I approach 80, is nowhere on the horizon. I feel more at peace with myself than ever before. It’s not that I don’t care about the meaning or purpose of life – I am a philosopher! Nor does my sense of peace mean that I am complacent or that I have delusions about my achievements and successes. Rather, I feel that deep contentment that religious people tell us is the gift or reward for proper living. I come to my present state for two separate reasons. As a student of Charles Darwin, I am totally convinced – God or no God – that we are (as the 19th-century biologist Thomas Henry Huxley used to say) modified monkeys rather than modified mud. Culture is hugely important, but to ignore our biology is just wrong. Second, I am drawn, philosophically, to existentialism. A century after Darwin, Jean-Paul Sartre said that we are condemned to freedom, and I think he is right. Even if God does exist, He or She is irrelevant. The choices are ours.

Sartre denied such a thing as human nature. From this quintessential Frenchman, I take that with a pinch of salt: we are free, within the context of our Darwinian-created human nature. What am I talking about? A lot of philosophers today are uncomfortable even raising the idea of ‘human nature’. They feel that, too quickly, it is used against minorities – gay people, the disabled, and others – to suggest that they are not really human. This is a challenge not a refutation. If a definition of human nature cannot take account of the fact that up to 10 per cent of us have same-sex orientation, then the problem is not with human nature but with the definition. 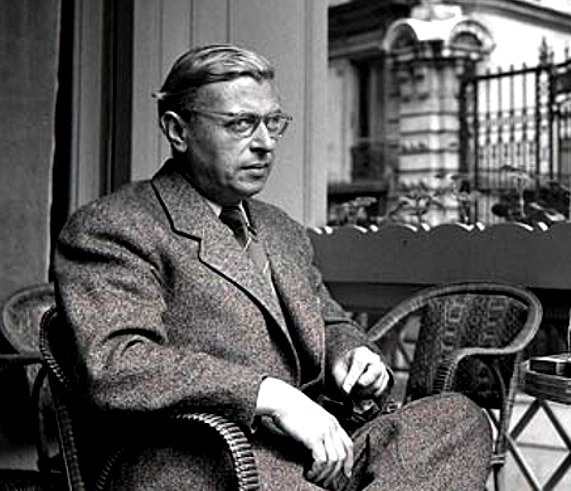 Jean Paul Sartre said that we are condemned to freedom

What, then, is human nature? In the middle of the 20th century, it was popular to suggest that we are killer apes: we can and do make weapons, and we use them. But modern primatologists have little time for this. Their findings suggest that most apes would far rather fornicate than fight. In making war we are really not doing what comes naturally. I don’t deny that humans are violent, however our essence goes the other way. It is one of sociability. We are not that fast, we are not that strong, we are hopeless in bad weather; but we succeed because we work together. Indeed, our lack of natural weapons points that way. We cannot get all we want through violence. We must cooperate.

Darwinians did not discover this fact about our nature. Listen to the metaphysical poet John Donne in 1624:

No man is an island,
Entire of itself,
Every man is a piece of the continent,
A part of the main.
If a clod be washed away by the sea,
Europe is the less.
As well as if a promontory were.
As well as if a manor of thy friend’s
Or of thine own were:
Any man’s death diminishes me,
Because I am involved in mankind,
And therefore never send to know for whom the bell tolls;
It tolls for thee.

Darwinian evolutionary theory shows how this all came about, historically, through the forces of nature. It suggests that there is no eternal future or, if there is, it is not relevant for the here and now. Rather, we must live life to the full, within the context of – liberated by – our Darwinian-created human nature. I see three basic ways in which this occurs.

First, family. Humans are not like male orangutans whose home life is made up mainly of one-night stands. A male turns up, does his business, and then, sexually sated, vanishes. The impregnated female births and raises the children by herself. This is possible simply because she can. If she couldn’t then, biologically it would be in the interests of the males to lend a hand. Male birds help at the nest because, exposed as they are up trees, the chicks need to grow as quickly as possible. Humans face different challenges, but with the same end. We have big brains that need time to develop. Our young cannot fend for themselves within weeks or days. Therefore humans need lots of parental care, and our biology fits us for home life, as it were: spouses, offspring, parents, and more. Men don’t push the pram just by chance. Nor boast to their co-workers about their kid getting into Harvard.

Second, society. Co-workers, shop attendants, teachers, doctors, hotel clerks – the list is endless. Our evolutionary strength is that we work together, helping and expecting help. I am a teacher, not just of my children, but of yours (and others) too. You are a doctor: you give medical care not just to your children, but to mine (and others) too. In this way, we all benefit. As Adam Smith pointed out in 1776, none of this happens by chance or because nature has suddenly become soft: ‘It is not from the benevolence of the butcher, the brewer, or the baker that we expect our dinner, but from their regard to their own self-interest.’ Smith invoked the ‘invisible hand’. The Darwinian puts it down to evolution through natural selection. As evolution became widely accepted in the 1870s, caricatures of Charles Darwin with the body of an ape or monkey symbolised evolution. Image credit: WIkipedia

Though life can be a drag sometimes, biology ensures that we generally get on with the job, and do it as part of our fulfilled lives. John Stuart Mill had it exactly right in 1863: ‘When people who are fairly fortunate in their material circumstances don’t ﬁnd sufﬁcient enjoyment to make life valuable to them, this is usually because they care for nobody but themselves.’

Third, culture. Works of art and entertainment, TV, movies, plays, novels, paintings and sport. Note how social it all is. Romeo and Juliet, about two kids in ill-fated love. The Sopranos, about a mob family. A Roy Lichtenstein faux-comic painting; a girl on the phone: ‘Oh, Jeff… I love you, too… but…’ England beating Australia at cricket. There are evolutionists who doubt that culture is so tightly bound to biology, and who are inclined to see it as a side-product of evolution, what Stephen Jay Gould in 1982 called an ‘exaptation’. This is surely true in part. But probably only in part. Darwin thought that culture might have something to do with sexual selection: protohumans using songs and melodies, say, to attract mates. Sherlock Holmes agreed; in A Study in Scarlet (1887), he tells Watson that musical ability predates speech, according to Darwin: ‘Perhaps that is why we are so subtly influenced by it. There are vague memories in our souls of those misty centuries when the world was in its childhood.’

Draw it together. I have had a full family life, a loving spouse and children. I even liked teenagers. I have been a college professor for 55 years. I have not always done the job as well as I could, but I am not lying when I say that Monday morning is my favourite time of the week. I’m not much of a creative artist, and I’m hopeless at sports. But I have done my scholarship and shared with others. Why else am I writing this? And I have enjoyed the work of fellow humans. A great performance of Mozart’s opera The Marriage of Figaro is heaven. I speak literally.

This is my meaning to life. When I meet my nonexistent God, I shall say to Him: ‘God, you gave me talents and it’s been a hell of a lot of fun using them. Thank you.’ I need no more. As George Meredith wrote in his poem ‘In the Woods’ (1870):

The lover of life knows his labour divine,
And therein is at peace.

A Meaning to Life (2019) by Michael Ruse is published via Princeton University Press.

The 250-crore Necropolis: Welcome to the Indian Council of Philosophical Research