Movement of tectonic plates takes millions of years, will eventually lead to an African island.

A large crack, stretching several kilometres, made a sudden appearance recently in south-western Kenya. The tear, which continues to grow, caused part of the Nairobi-Narok highway to collapse. Initially, the appearance of the crack was linked to tectonic activity along the East African Rift. But although geologists now think that this feature is most likely an erosional gully, questions remain as to why it has formed in the location that it did and whether its appearance is at all connected to the ongoing East African Rift. For example, the crack could be the result of the erosion of soft soils infilling an old rift-related fault.

The Earth is an ever-changing planet, even though in some respects change might be almost unnoticeable to us. Plate tectonics is a good example of this. But every now and again something dramatic happens and leads to renewed questions about the African continent splitting in two. 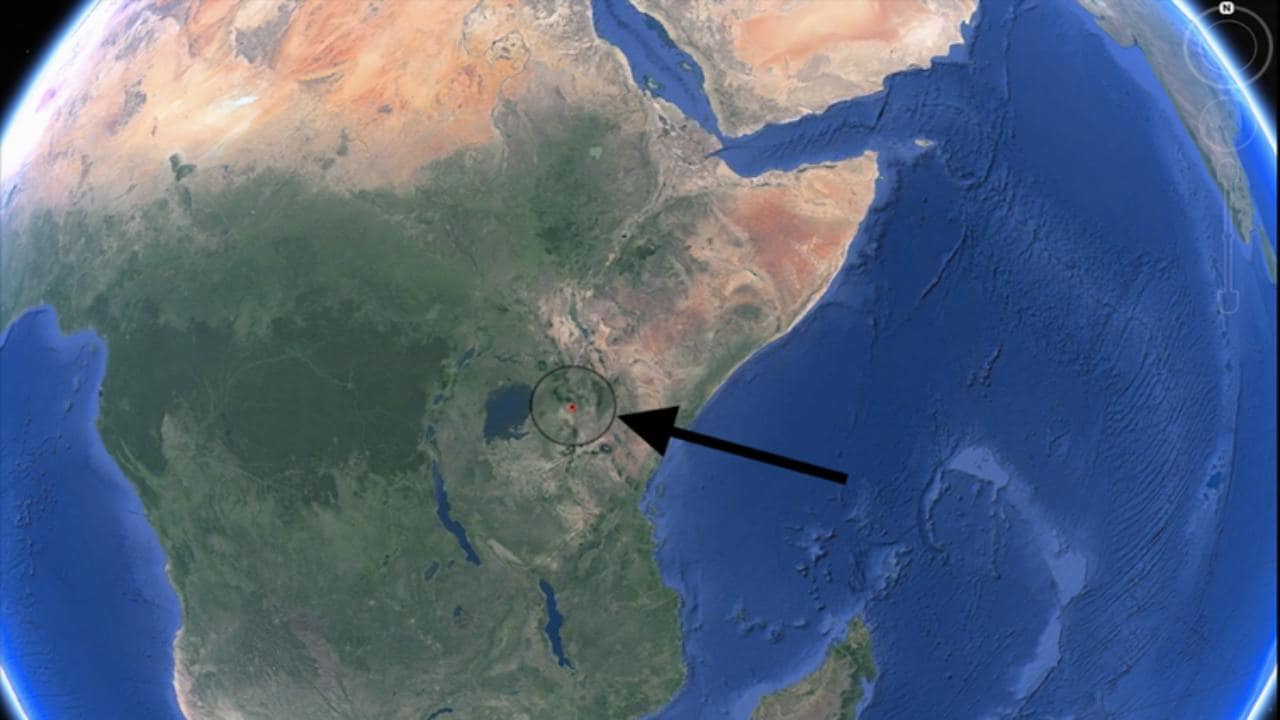 The Earth’s lithosphere (formed by the crust and the upper part of the mantle) is broken up into a number of tectonic plates. These plates are not static, but move relative to each other at varying speeds, “gliding” over a viscous asthenosphere. Exactly what mechanism or mechanisms are behind their movement is still debated, but are likely to include convection currents within the asthenosphere and the forces generated at the boundaries between plates.

These forces do not simply move the plates around, they can also cause plates to rupture, forming a rift and potentially leading to the creation of new plate boundaries. The East African Rift system is an example of where this is currently happening.

The East African Rift Valley stretches over 3,000km from the Gulf of Aden in the north towards Zimbabwe in the south, splitting the African plate into two unequal parts: the Somali and Nubian plates. Activity along the eastern branch of the rift valley, running along Ethiopia, Kenya and Tanzania, became evident when the large crack suddenly appeared in south-western Kenya.

Why does rifting happen?

When the lithosphere is subject to a horizontal extensional force it will stretch, becoming thinner. Eventually, it will rupture, leading to the formation of a rift valley. This process is accompanied by surface manifestations along the rift valley in the form of volcanism and seismic activity. Rifts are the initial stage of a continental break-up and, if successful, can lead to the formation of a new ocean basin. An example of a place on Earth where this has happened is the South Atlantic ocean, which resulted from the break up of South America and Africa around 138m years ago – ever noticed how their coastlines match like pieces of the same puzzle? 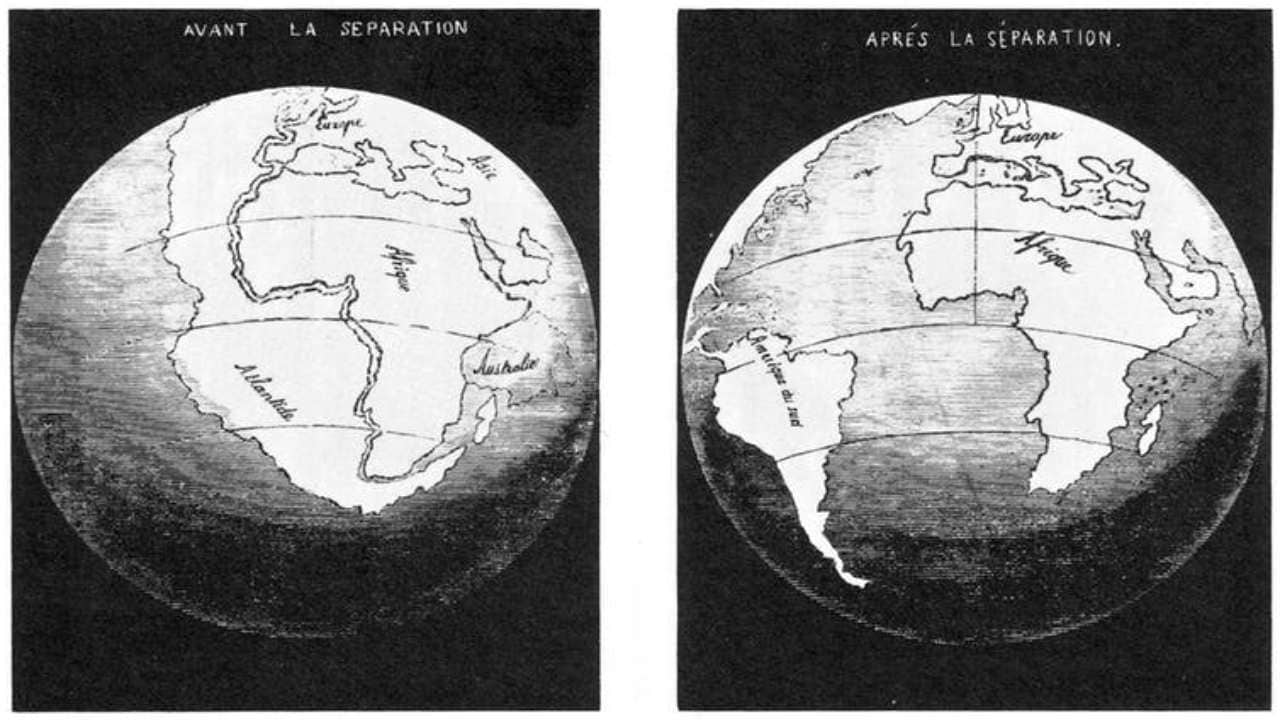 Maps made by Snider-Pellegrini in 1858 showing his idea of how the American and African continents may once have fitted together. Image credit: Wikipedia

Continental rifting requires the existence of extensional forces great enough to break the lithosphere. The East African Rift is described as an active type of rift, in which the source of these stresses lies in the circulation of the underlying mantle. Beneath this rift, the rise of a large mantle plume is doming the lithosphere upwards, causing it to weaken as a result of the increase in temperature, undergo stretching and breaking by faulting. 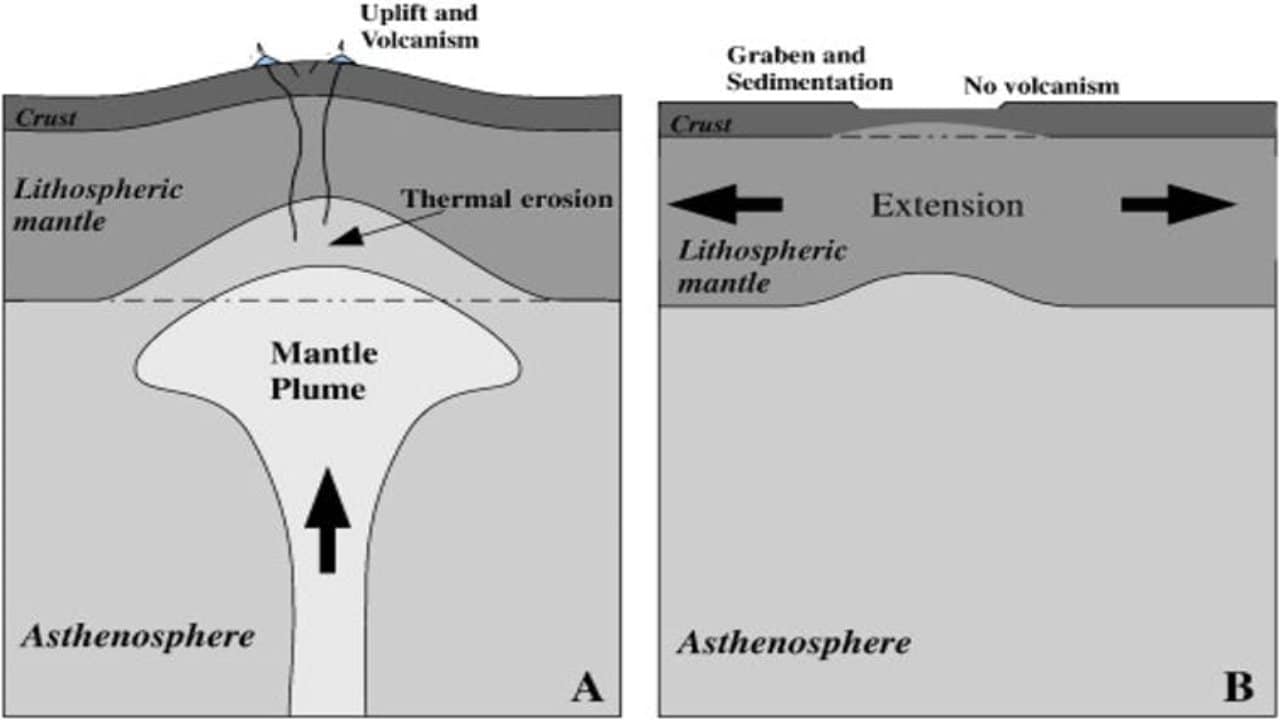 Evidence for the existence of this hotter-than-normal mantle plume has been found in geophysical data and is often referred to as the “African Superswell”. This superplume is not only a widely-accepted source of the pull-apart forces that are resulting in the formation of the rift valley but has also been used to explain the anomalously high topography of the Southern and Eastern African Plateaus.

Rifts exhibit a very distinctive topography, characterised by a series of fault-bounded depressions surrounded by higher terrain. In the East African system, a series of aligned rift valleys separated from each other by large bounding faults can be clearly seen from space.

Not all of these fractures formed at the same time, but followed a sequence starting in the Afar region in northern Ethiopia at around 30m years ago and propagating southwards towards Zimbabwe at a mean rate of between 2.5-5cm a year. 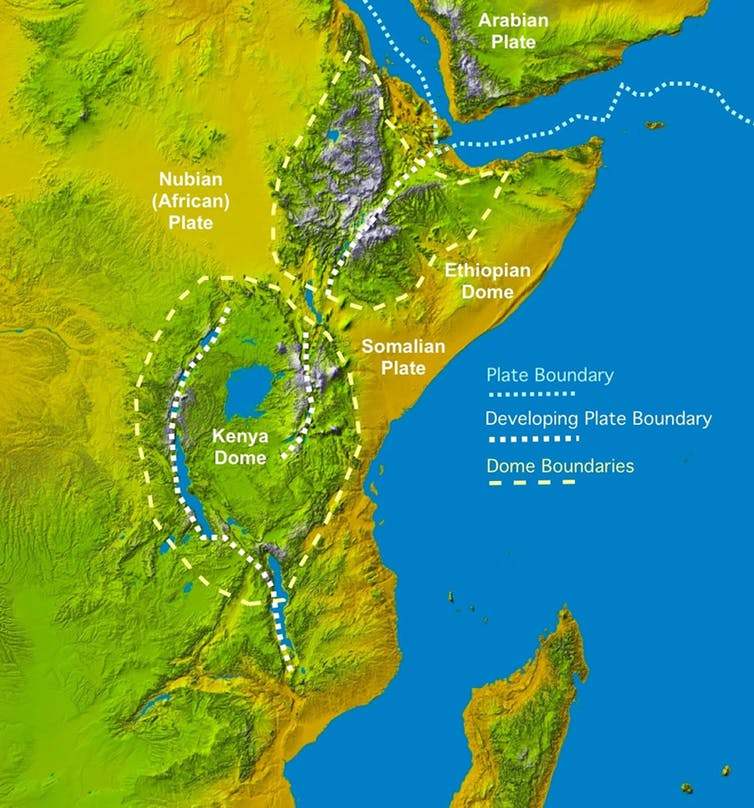 Although most of the time rifting is unnoticeable to us, the formation of new faults, fissures, and cracks or renewed movement along old faults as the Nubian and Somali plates continue moving apart can result in earthquakes.

However, in East Africa, most of this seismicity is spread over a wide zone across the rift valley and is of relatively small magnitude. Volcanism running alongside is a further surface manifestation of the ongoing process of the continental break up and the proximity of the hot molten asthenosphere to the surface.

A timeline in action

The East African Rift is unique in that it allows us to observe different stages of rifting along its length. To the south, where the rift is young, extension rates are low and faulting occurs over a wide area. Volcanism and seismicity are limited.

Towards the Afar region, however, the entire rift valley floor is covered with volcanic rocks. This suggests that, in this area, the lithosphere has thinned almost to the point of complete break-up. When this happens, a new ocean will begin forming by the solidification of magma in the space created by the broken-up plates. Eventually, over a period of tens of millions of years, seafloor spreading will progress along the entire length of the rift. The ocean will flood in and, as a result, the African continent will become smaller and there will be a large island in the Indian Ocean composed of parts of Ethiopia and Somalia, including the Horn of Africa.

Dramatic events, such as sudden motorway-splitting faults can give continental rifting a sense of urgency. However, rifting is a very slow process that, most of the time, goes about splitting Africa without anybody even noticing.

This article was updated and the headline changed on April 7 to reflect ongoing discussion by geologists about the cause of the large crack that appeared on the East Africa Rift and whether its location is related to the African continent split.