She believes collective protests by children from all over the world for climate justice will bring about a positive change.

Along the Ganga, in the ancient city of Haridwar in Uttarakhand, a precocious 11-year-old girl is bristling with anger. Ridhima Pandey is tired of global leaders not paying enough attention to the climate emergency.

So along with Swedish climate activist Greta Thunberg, Ridhima and 14 other young activists filed a complaint with the United Nations Committee on the Rights of the Child against five respondent countries (Argentina, Brazil, France, Germany, and Turkey), indicative of the largest emitters in the world, to protest lack of government action on the climate crisis. The adjudication of the complaint is done by an independent committee of experts. Ridhima Pandey says she wants to do everything possible in her capacity to save the climate. Image credit: Dinesh Pandey.

“I supported the complaint against these nations because I feel that the global leaders were not giving attention to the climate crisis and they were not taking this matter seriously and as a result, global warming is increasing day by day,” Ridhima, whose favourite subjects are science and math, told Mongabay-India.

The bespectacled pre-teen is not shy of voicing her unvarnished opinions as a young climate activist and is certainly not unaware of the flood of online abuse and spate of conspiracy theories and smear campaigns that have followed Thunberg and other youth climate activists, ever since they started speaking out against the climate crisis.

“I feel very bad as well as angry that some people are criticising young climate activists and I just want to ask them ‘what you have done’ and then say anything to us,” said Ridhima, who led a climate strike in Dehradun in September under the FridaysForFuture movement and has expressed concern over the pollution and cleaning of the Ganga.

FridaysForFuture is a people’s movement following the call from Greta Thunberg to go on strike from school. On 15 March 2019, an estimated 1.5 million students hit the streets in protest in more than 100 countries for the first global climate strike, while an environmental campaign group paralysed parts of London. A week after the protests, lawmakers in the U.K. Parliament declared a climate emergency.

In a steely tone, Ridhima said: “I want to say that as we children from all over the world are fighting for climate justice, we hope that it will bring a positive change. This change will benefit those who troll us as well.”

Her first brush with activism began in 2017 when moved by the devastating Uttarakhand floods in 2013, that claimed hundreds of lives, Ridhima petitioned India’s National Green Tribunal (NGT) to direct the central government to take “effective, science-based action to reduce and minimise the adverse impacts of climate change in the country.”

“After the Kedarnath (Uttarakhand) floods I saw that our government was still not doing enough to stop global warming and to protect our environment which our government promised to do in the 2015 Paris Agreement. I love nature and wildlife and they perished in the floods. All our government promises are on paper but lack action and that’s why I sued my government in 2017,” Ridhima said. 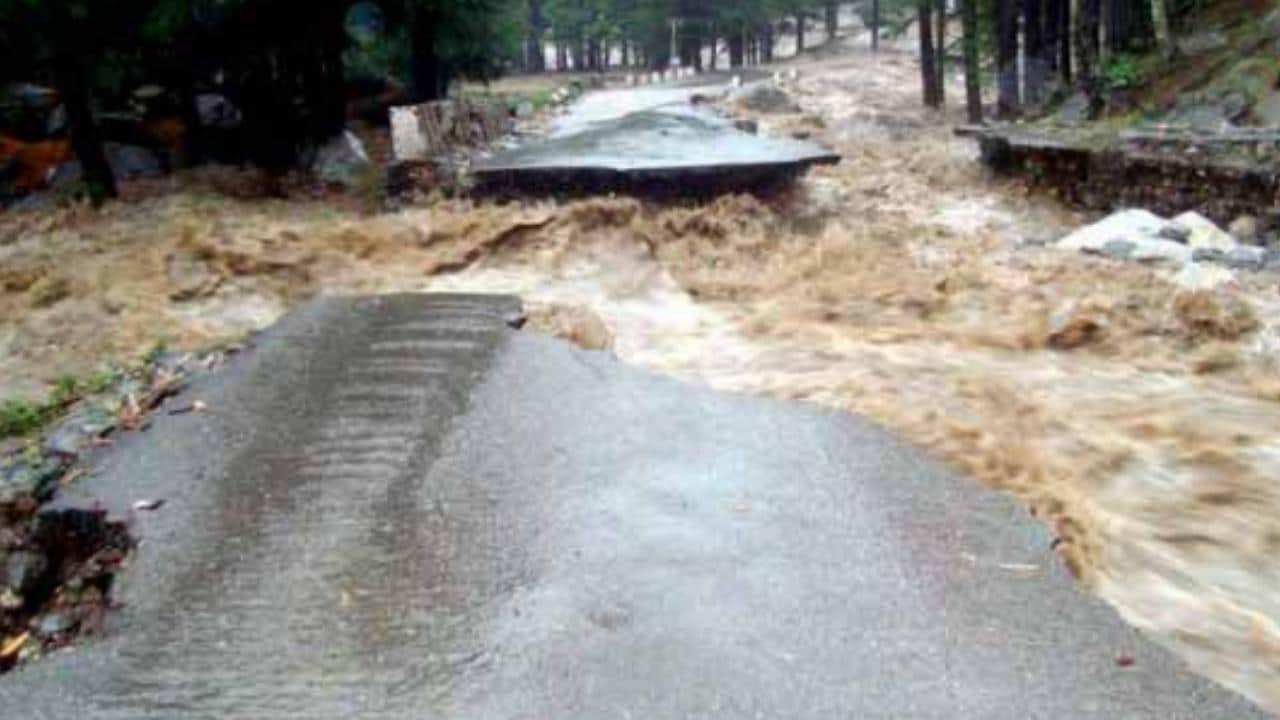 The Uttarakhand floods were devastating and destroyed alot of the infrastructure.

As a nine-year-old in 2017, she approached the NGT as an applicant who was “directly affected by the adverse impacts of climate change and rising global temperatures.”

“As a child, she was very curious. Even before the floods, she wanted to know why animals are being killed and why trees are being cut,” her father Dinesh Pandey, a conservationist with Wildlife Trust of India, said.

The 2013 floods spurred Ridhima, then a five-year-old, to learn more about climate change. What followed, recalled her father, was an insatiable curiosity for more information on the natural disaster and events leading up to it.

“I came to know that all these floods and droughts (extreme weather events) are occurring due to global warming and if warming continues it is going to affect our future. I felt very bad that humans are not doing something to stop global warming and then I started talking about climate issues,” Ridhima narrated.

Ridhima emphasised that she is part of a population segment (children) that is most vulnerable to changes in climate in India but is not part of the decision-making process.

Children are major victims of impacts of climate change

Climate change is likely to adversely affect the lives of children and adolescents all over the world, according to the 2014 UNICEF report ‘Challenges of Climate Change: Children on the Front Line’. Children and young people represent 30 percent of the world’s population. Over 99 percent of deaths — already attributable to climate-related changes — occur in developing countries and children makeup over 80 percent of those deaths, the report states.

Underscoring the backdrop of climate change, the loss of biodiversity and environmental damage, the latest UNICEF report warned that an alarmingly high number of children are suffering the consequences of poor diets and a food system that is failing them.

“I would like to do everything possible to save the climate at my level,” she said, adding she plans to launch her NGO to mobilise action on climate change and awareness.

“I would like to take up the subject for higher studies,” said Ridhima. It has not been all smooth sailing for the young activist.

“Sometimes people around me and a section of students in my school mock me by saying what will this kid do? They say what is the need for all this activism. But later on, many of them have realised the importance of this issue and have started taking an interest in contributing to climate action in their own ways. So I feel making people aware is a key step we need to take,” Ridhima explained.

Her engagements with climate activism translate into a fair amount of traveling for meetings and conferences that eat away into her school hours. But her parents, teachers and her best friends ensure she is updated on the latest in her curriculum.

“The girls in my school at least listen to what I have to say and care about the issue of climate change but the boys don’t appear to be so concerned,” lamented Ridhima who believes women and girls are crucial to the climate movement.

“Girls are more hard-working, sensible, quick-witted and the best example of this is Gaura Devi from Uttarakhand whom we know for the Chipko movement (the iconic tree-hugging protest against the felling of trees) in the 1970s,” pointed out Ridhima.

Ridhima’s mother Vinita who is a beat officer with the Uttarakhand forest department expressed amazement at her daughter’s tenacity. “I feel as if she is teaching me and I am the student.”

“As parents, we are trying to be as supportive of her as possible but like other parents, we have ensured she remains grounded,” said Vinita as Ridhima adds she needs parental guidance and supervision to watch certain movies or online content.

In recent developments, Ridhima also appealed to Prime Minister Narendra Modi to prevent trees of Aarey forests in Mumbai from being chopped down for a controversial metro car shed project.

After her stint at the United Nations General Assembly, Ridhima spoke at the Xynteo Exchange in Norway earlier this month (October 2019) alongside Norwegian Sami artist and climate change activist Ella Marie Hætta Isaksen. According to information on the event’s website, Ridhima and Isaksen reflected on “activism in today’s social media landscape and its divided reality where the young blame the old for allowing wicked problems to fester, and the old blame the young for being naive and idealistic.”

Ridhima said she has made friends with her peers who come from different corners of the world but share similar concerns. “We swap numbers and stay in touch,” she said with a sense of camaraderie.

Does she feel nervous at all while speaking at these events? “I do feel a bit nervous initially but once I start talking it just feels right. And then I think if I don’t say anything just because I am nervous then what is the point of going all the way to these meetings? We won’t be able to reach out to people if we are held back by nerves.”

Ridhima and her peers’ efforts have set off a domino effect of protests by goading children and young adults in India to hit the streets to raise their voice against inaction on climate change.

“I am an individual and I want to inspire the youngsters because adults are doing nothing. I want young adults to speak up because they are the future. Maybe because of my presence, others will be inclined to take an interest and speak up,” Ankita Ghosh, a college-goer, told Mongabay-India during the Kolkata edition of the FridaysForFuture strike.

Talking to Mongabay-India, Albert van Jaarsveld, Director General of International Institute for Applied Systems Analysis underscored the sense of urgency with which grassroots movements including youth voices are responding to the climate crisis.

Jaarsveld, drawing from his experience in biodiversity, conservation planning, climate change, and ecosystem services, said that political parties are responding to these grassroots movements and it is a positive sign.

“The issue of urgency is squarely on the table and you would have seen that nonpolitical parts of societies have responded to that sense of urgency and our youth movements across the world have taken out the banner and have said that climate is our future and it is encouraging that politicians recognise the movements. They don’t stop it,” Jaarsveld said.

Youth movements have a long history in the world as also in India, but why is this current form of activism so forceful – is it because they are better coordinated and social media also helps mobilise people? “Yes, to a certain extent the social media plays a positive role. But, more than social media in modern India, youth has its own culture and values. When they are in the university system, they are more mobilised because the university offers space and provides fertile land for student movements to grow,” said Sarmistha Pattanaik, Associate Professor, Department of Humanities and Social Sciences, Indian Institute of Technology Bombay.

Pattanaik believes the participation of young women is vital in these movements.

“It is quite vital, to create a self-identity in the mainstream society for women in a gender-differentiated social structure and culture,” Pattanaik told Mongabay-India.