A vanishing glacier, displaced walrus, wrecked villages and 7 other visuals of the impact climate change has in oceans and land.

In the 2000s, the word that spelt environmental doom was 'global warming'. Since the 2010s, we've learned a great deal about the consequences of human activity on ecology and the environment from climate change. Urbanisation and deforestation have caused irreparable damage to our planet in recent years. With rapid changes underway that scientists don't fully understand, climate change spurred by human activity is on its way to causing some irreversible damage to the planet and its residents.

In the last decade, the world has witnessed disasters that were out of the ordinary — more intense, more frequent and harder to predict that it already was. One of the most dramatic impacts of these changes in recent years has been the increase in hydroclimatic hazards. These hazards have, over time, also increased the vulnerability of people to weather-related disasters in many developing nations.

The cost of defending residents and recovering from extreme weather events comes at the cost of economic growth to many of these countries, which, in the view of many experts, is an unfair burden on developing, climate-vulnerable nations. When they haven't had a proportionate role to play in the historic levels of polluting emissions, why should they pay? While a key point of discussion in many recent global climate dialogues, including the most recent COP25 summit, this challenge (along with many others like carbon credits, carbon trade and compliance with the 2015 Paris Agreement) remains unresolved.

In the meanwhile, the disasters keep on coming — stronger and less predictable. Below is a roundup of some of the most devastating impacts of climate change-related events in the past decade. 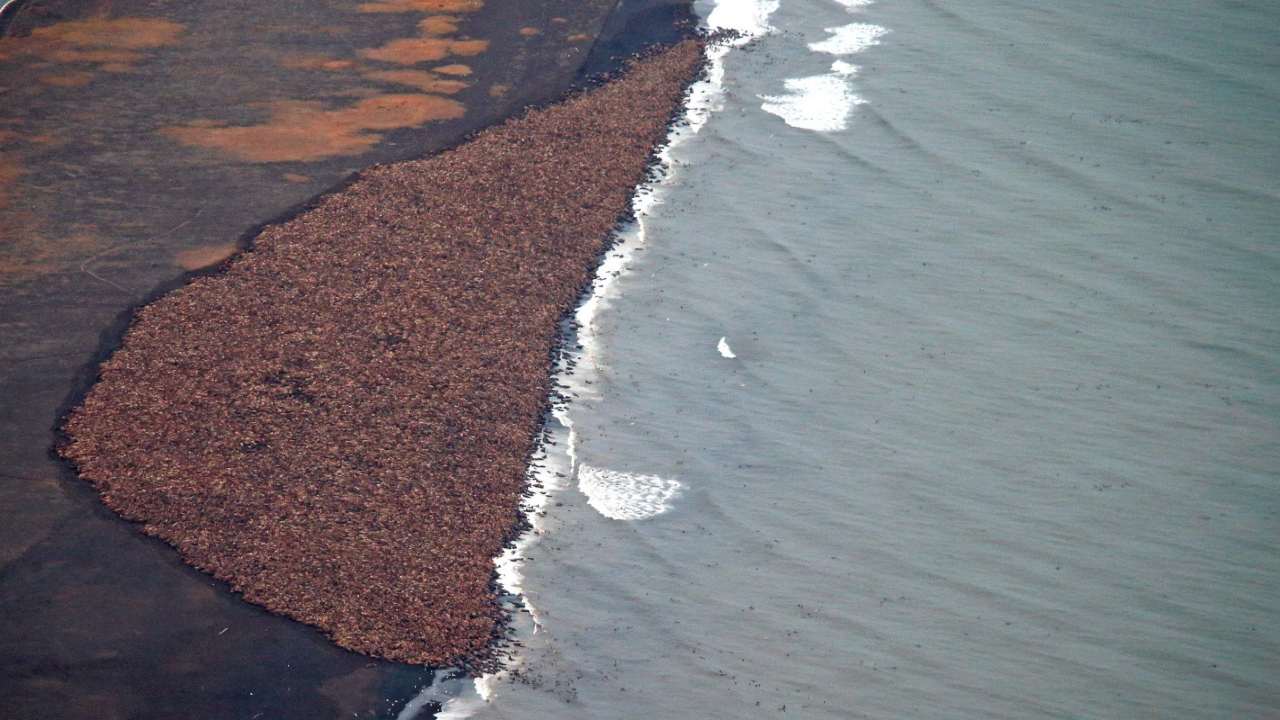 Walruses in the thousands were stranded in Alaska after their usual ice float in the Chukchi Sea melted away. Image: Gary Braasch (2015)

Since the summer of 2014, scientists have caught an unusual behaviour in walruses along Alaska's icy coastline. In this 2018 image, around 35,000 walruses can be seen huddling into an enormous crowd on the shores of Point Lay, Alaska. Researchers studying these animals this they were driven to land because the Chukchi Sea ice floes they'd normally rest on melt almost entirely in the summer.

Typically, these Pacific walruses don't have the stamina to swim indefinitely, depending on sea ice for a periodic rest, making their way along the Bering Sea as it shrinks in size in summers, finally ending in the Chukchi Sea. Every year since 2007 (except for 2008), there has been just enough sea ice left for the walrus to make use of  —  all the summer sea ice disappeared, causing record numbers of walrus to pack themselves on Alaska's beaches.

Bangladesh is in bad trouble Bangladesh is the most vulnerable nation to impacts of climate change. Image: Ignacio Marin/Getty

Bangladesh is home to the second-largest river basin in the world (the Sunderbans) and is largely a nation with low and flat land. Just 10 percent of the country lies a meter above sea level. It has been ranked the most vulnerable nation to climate change in a survey by global risk assessment-consulting firm Maplecroft, for its exposure to threats like floods, rising sea levels, cyclones and landslides. This photo above shows where some homes used to be before storms and rising water levels washed them away during the Kalabogi flooding in the Sunderbans in March 2018.

The bulk of the Bangladeshi economy is shaped by agriculture, forestry, and fishing — all of which are prone to risks and forced to cope with climate change and its impacts. This, on top of its fairly weak political and institutional capacity to tackle the issues it faces, makes the threat all the more severe. Due to the unique geographic, socio-economic and physical characteristics of Bangladesh, it has made the country extremely vulnerable to the impacts of climate change. 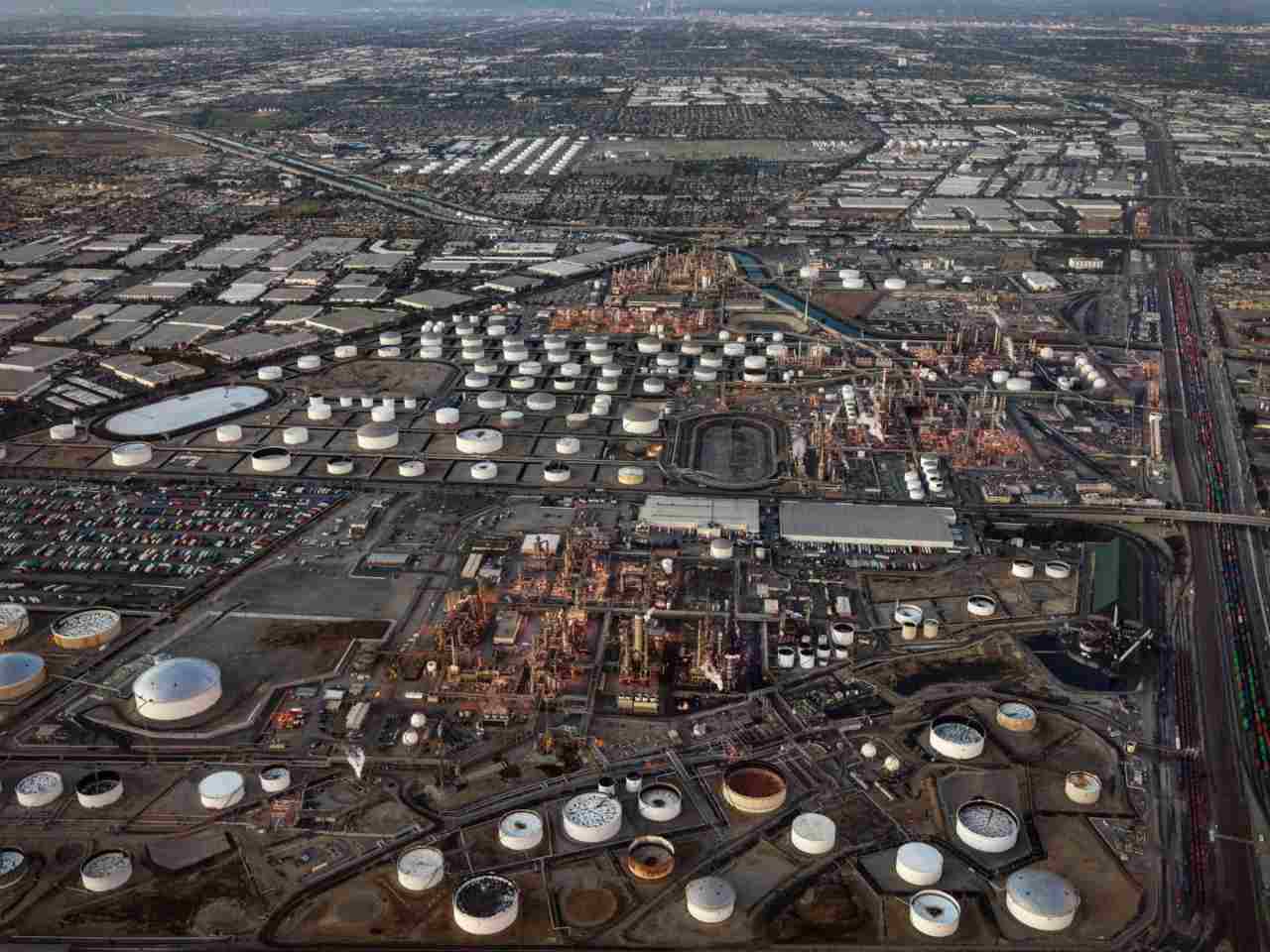 United States President Donald Trump saw to it on 4 November 2019 that the nation officially pulls out of the Paris Agreement to limit carbon emission to meet the warming limit of 1.5 degrees by 2100, instead of the 3-4 degree rise that is currently projected by many climate models. This move would withdraw the United States from the Paris Agreement, but also leave global climate diplomats to plot a path forward with more hurt than help from the largest economy in the world. The US has seen backlash from its own citizens as well as activists around the world for the decision.

What's more, this move has given the US a free pass to continue in its historically-polluting path of economic growth without being sensitive to the global fight to lower emissions. Images like the one above, of oil refineries stretching far and wide in Carson, California, explore the human footprint of climate change and the state of the planet — and the US still has a lot of historic emissions to compensate for, one way or the other. 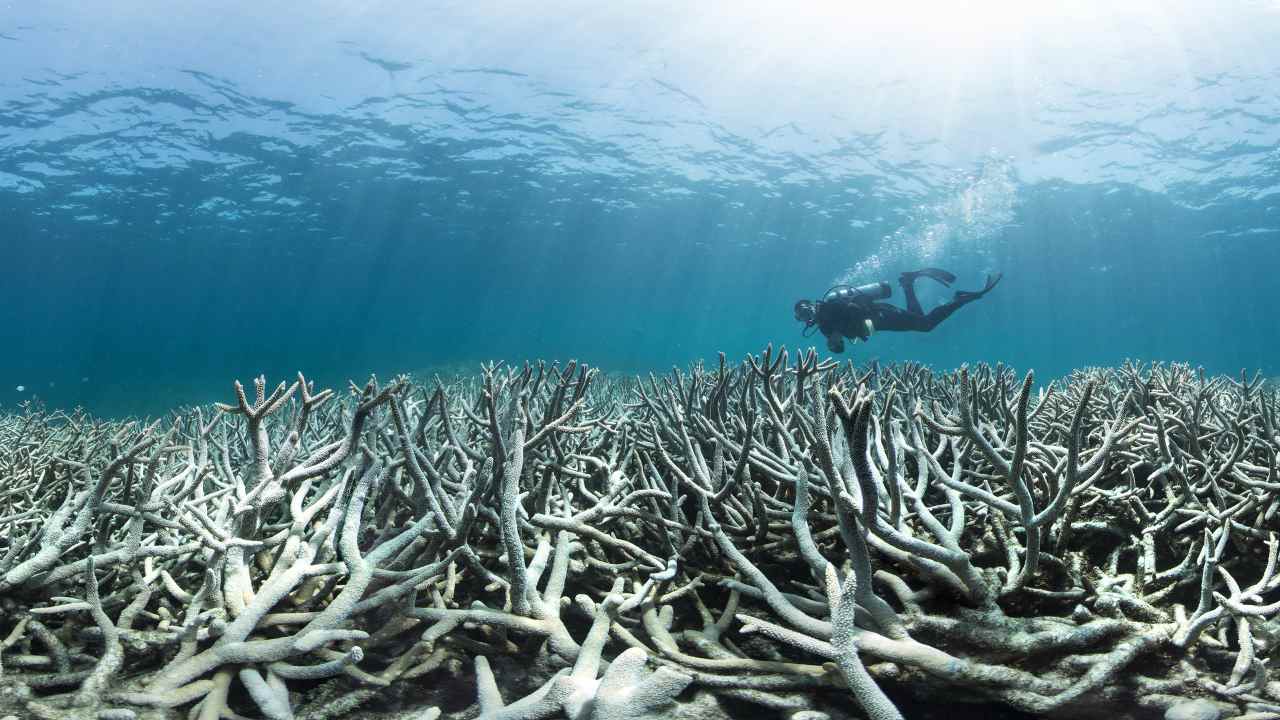 The devastating coral bleaching that swept across Australia's Great Barrier Reef in 2016 and 2017 rightly captured the world’s attention. Since 2016, half of the Great Barrier Reef has been bleached to death — a global problem triggered by warming waters due to climate change. Unnaturally hot ocean water can, and does, destroy the colourful algae that live with the coral itself in a mutually beneficial pairing. When these algae die, the coral (which is actually an animal, despite its plant-like appearance) is left to starve.

Corals are part of a larger ecosystem that includes ocean flora like mangroves and seagrass. Mangroves are trees that are salt-tolerant, with roots that submerged underwater and act as a nursery and nest for marine life. These young ones eventually migrate to reefs, which many of these creatures call home for a significant period of their young and adult lives. While corals aren't technically "dead" when they bleach, it does enough damage that some of the reef architecture can never be replenished or recovered the same way again. Even if new corals came in to replace older, bleached or dying ones, the reef won't resemble the table-shaped/branched structures that give it a "city-like" architecture for the marine life that call it home. An aerial view of the Big Lagoon, one ecosystem in the World Heritage-listed Shark Bay region of Australia. Image: Wikimedia Commons

The threat to the Great Barrier Reef is only too real and important. And yet, it takes attention away from other marine ecosystems in Australia that are just as threatened, if not more. The World Heritage-listed coastal reserve known as "Shark Bay" was hit by a catastrophic marine heatwave that swept across Australian waters in 2011. It destroyed some 900 sq km of seagrass – over one-third of the total in the area.

Turtles, crab species, scallops and other endangered species declined in numbers, fisheries were shut down, and somewhere between 2-9 million tonnes of carbon dioxide – roughly the annual emissions from 8,00,000 homes, was released from this one ecosystem. Ecosystems like Shark Bay are falling apart left, right and centre around the world, spurred by the climate crisis.

There’s a lot more damage awaiting us if we don’t give vulnerable marine habitats due attention. The Bay of Bengal Sea's eastern coast town of Odisha in the aftermath of the cyclone Fani , 65 km away from the eastern Indian state Odisha's capital city Bhubaneswar, on 7 May 2019. Image: STR/NurPhoto via Getty

When Cyclone Fani made landfall on 3 May 2019, it struck the coast of Odisha with winds of over 185 km per hour (Category 4 Storm) as an "extremely severe" cyclonic storm. It was the most severe tropical cyclone to hit India in 20 years. The mammoth of a cyclone also brought a storm surge of 13 feet (waves lashing the shore) in some regions.

The UN had issued a warning at the time: that 28 million people were living along the path of the cyclone — in India and Bangladesh. Ultimately, over 1.2 million people were evacuated in time to avoid the worst of Fani’s destruction, but both nations suffered a significant loss to lives and property. There was no wildfire in California’s history like the Camp Fire of 2018. Image: Landsat 8/US Geological Survey/Markuse Pierre

There was no wildfire in California’s history like the Camp Fire of 2018. Started on 8 November 2018 in Northern California’s Butte County by a faulty electrical transmission line sparking, the fire was amplified by dry winds and an ongoing drought in the region. It spread extremely quickly, covering roughly 62,000 hectares (almost 650 sq km) of land.

After two weeks of attempts to contain it, two towns (Paradise and Concow) in California had been almost completely destroyed, each losing ~95 percent of the structures in their respective towns.

In Iceland, one of the many glaciers at risk, Okjökull, melted out of existence this year – the first of many to come, experts think. According to a 1901 geological map, Okjökull spanned roughly 15 sq miles (38 sq km). Some seven decades later (in 1978), aerial photography estimated that the glacier had shrunk to 1 sq mile (3 sq km). Today, under half a sq mile (less than 1 sq km) remains.

In widely-circulating comparison images, we can see the final stages of the declining Okjökull, which was perched on top of the dormant Ok volcano in Iceland. The lost glacier was the subject of a documentary, Not Ok, which released in 2018.

Glaciers and groundwater are two of the foremost sources of clean water for consumption and support countless communities that live by these resources. Drinking water could soon become a scarce and expensive resource if more glaciers like this one disappear. 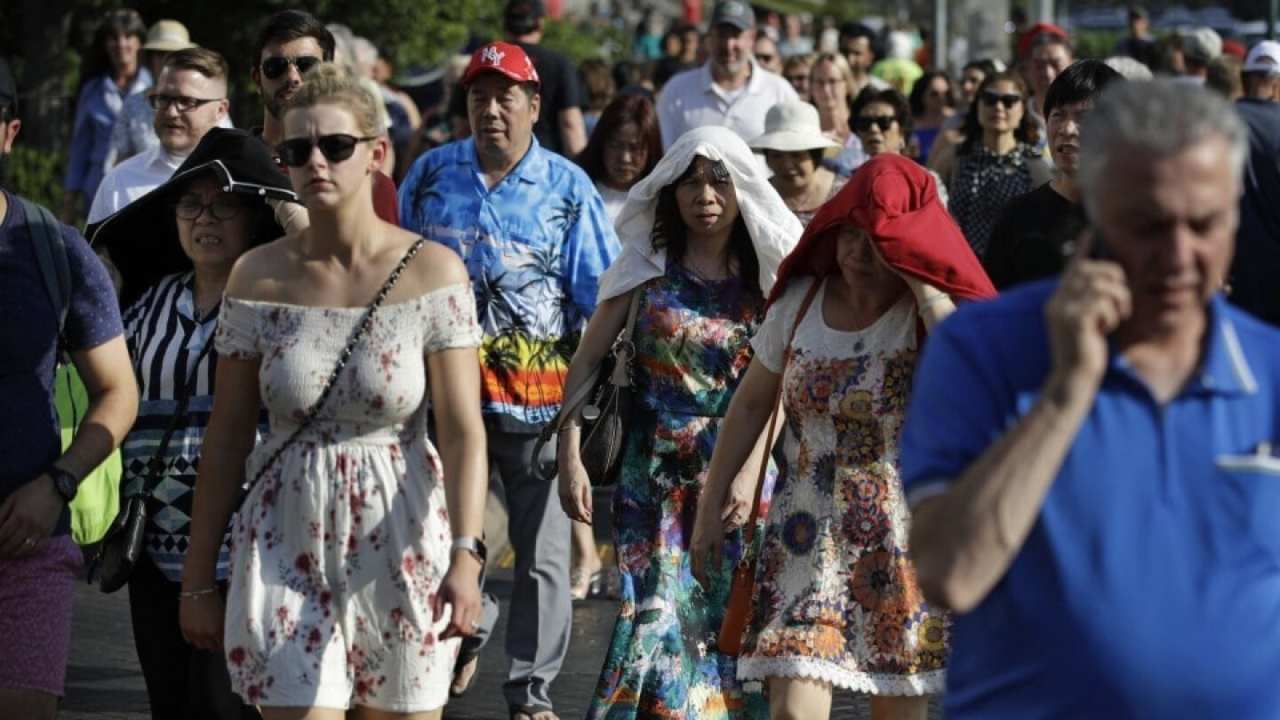 Heatwaves are sweeping the world at greater intensities than ever before. Image: WaPo/Getty

Heatwaves and droughts around the world are growing in frequency similarly to extreme weather events. The heatwave started in late June when temperatures across the US exceed 38 °C. The Midwest experienced some of the highest June temperatures on record.

What makes heatwave so dangerous isn’t necessarily the extreme/peak afternoon temperatures. The overnight lows simply don’t drop low enough in some parts of the world, and the inability to cool off at night puts an enormous amount of stress on the body. The heatwave was blanketed about a third of the population of the United States in the summer of 2019. Often cited as the most devastating weather-related flooding in India’s recent history, several days of pre-monsoon rainfall caused flash floods and landslides in Uttarakhand in June 2013.
The cloudburst also came down during tourist season, when hundreds of thousands of Hindu pilgrims were on a tour of the state’s historic temples. The downpour was a month before the start of the monsoon season and caught many by surprise (meteorologists included).