It's not every day you discover something new & amazing in our very own planetary neighborhood.

A pair of dusty discoveries made by astronomers recently could shake up our understanding of the inner planets in our solar system.

The first is a large ring of dust that shares an orbit with Mercury. The second – a cloud of yet-to-be-discovered asteroids that likely formed a similar orbital halo near Venus.

And the thought of undiscovered parts of our solar system – just a planet or two away from our own – is something that surprises one of the paper's authors.

"It's not every day you get to discover something new in the inner solar system," Marc Kuchner, co-author of the Venus study from NASA's Goddard Space Flight Center, said in a statement. "This is right in our neighbourhood."

Both, the Earth and Venus, being denser planets, were known to have enough gravitational tug to attract space dust to their orbits, but Mercury was thought not to have the same feature.

"People thought that Mercury, unlike Earth or Venus, is too small and too close to the Sun to capture a dust ring," Guillermo Stenborg, a solar scientist at the Naval Research Laboratory, said in a statement. The solar wind and magnetic forces from the Sun were thought to have blown any excess dust in Mercury's orbit. 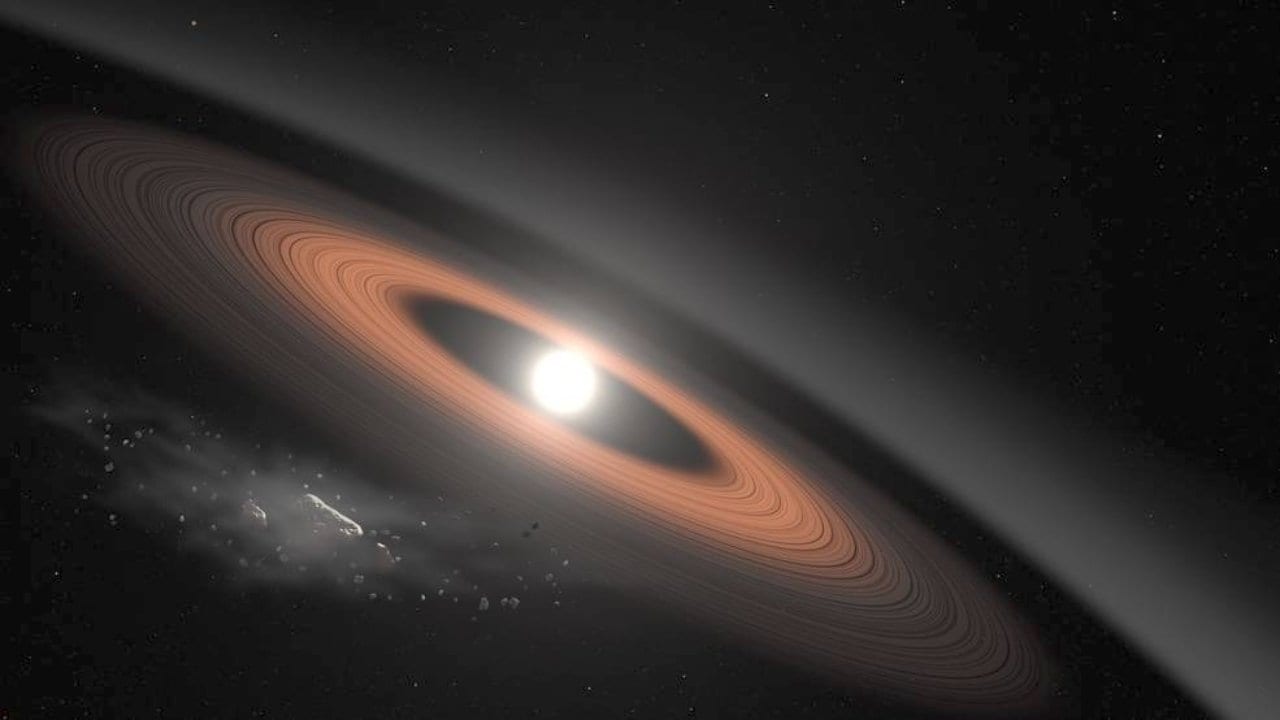 The dust is nothing but remnants from the early formation of the solar system 4.6 billion years ago. Whether rubble from asteroid collisions or crumbs from blazing comets, all these particles are dispersed throughout our entire solar system.

But when the dust settles in the solar system, it’s often in rings. They gather and form grainy rings along the orbits of Earth and Venus – rings that can be seen with telescopes on Earth. Studying the dust — its composition, its origin, and how it moves through space — can give scientists clues as to how planets came to be, and how they've become as they are in the solar system today.

Researchers have described a fine haze of cosmic dust all along Mercury’s orbit, making a ring that's roughly 15 million kilometres wide. Mercury, on the other hand, is just 4,878 kilometres wide and is enveloped completely in the vast cloud of dust as it orbits the Sun.

The pair of scientists that discovered the ring, in a wonderful irony, stumbled upon it when they were looking for proof of a region close to the Sun that was reportedly dust-free! 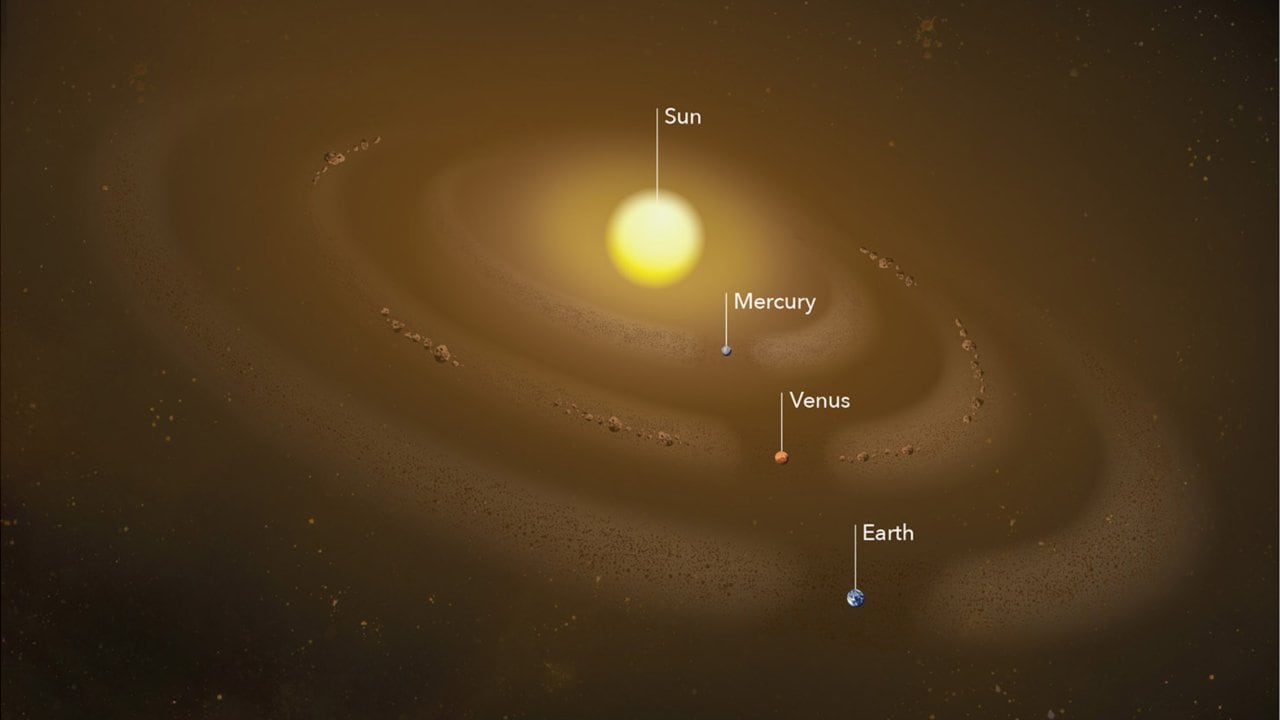 Many dust rings orbit the Sun, formed when planets’ gravities tug dust grains into their orbits around the Sun. Scientists detected a dust ring at Mercury’s orbit in 2018. Image courtesy: NASA

According to a prediction from decades ago, the Sun's heat vaporises dust, sweeping and keeping a stretch of space close to the Sun completely dust-free. This boundary, if it exists, could tell scientists a lot – of the dust's composition, and of planet formation after the Big Bang.

Wherever from Earth they look towards the Sun, scientists are peering at all the dust transiting between the Earth and Sun, tricking them into thinking the Sun's close quarters are dustier than they actually are. The pair of scientists built a model of interplanetary space, based on pictures from NASA’s Solar and Terrestrial Relations Observatory (STEREO) to work around this problem.

There are two kinds of light picked up by STEREO's instruments – light from the Sun’s piping outer atmosphere (the corona), and light reflected off the dust floating around through space. The sunlight reflected off this dust, which orbits the Sun slowly, is about 100 times brighter than coronal light, the researchers said in the statement.

The scientists built their model as a tool to get rid of the pesky dust in STEREO's — and eventually, the Parker Solar Probe's — images. But that same map was also key to separating the two sources of light, i.e. if all the light in an image came from the corona alone, that could indicate they’ve found the mythical dust-free space after all. 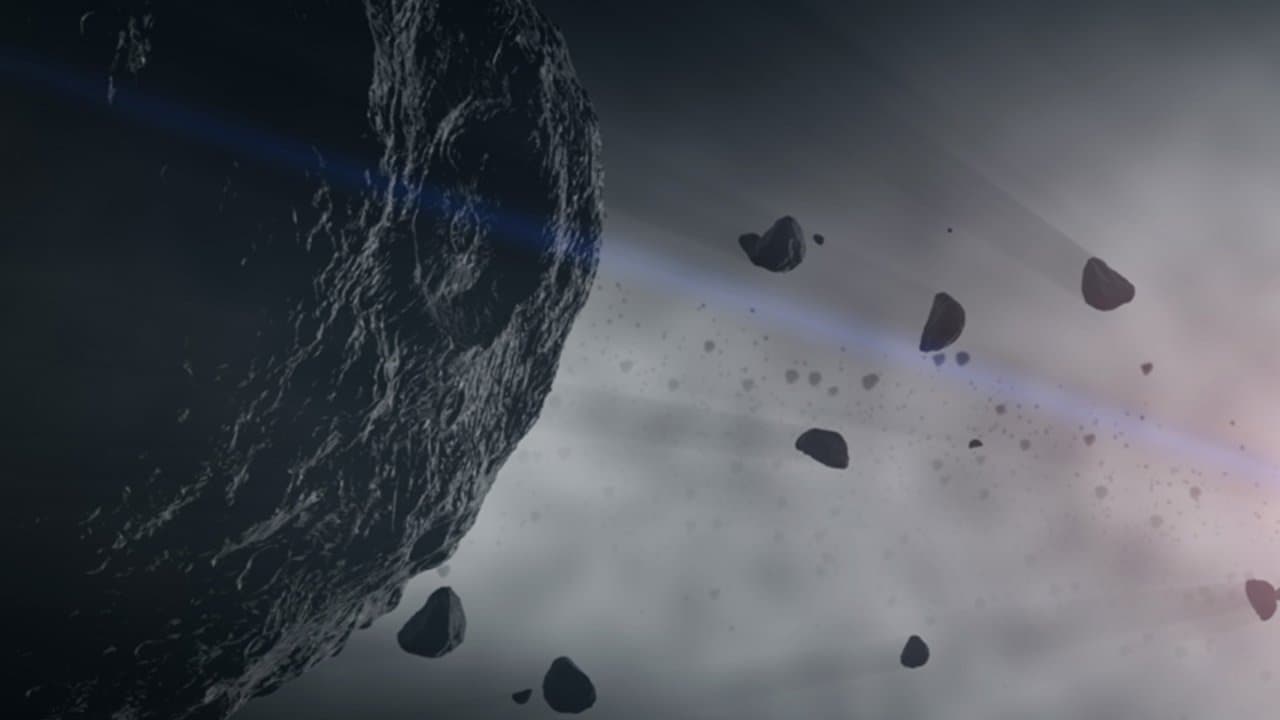 Scientists think planets start off as mere grains of dust, emerging from giant disks of gas & dust circling young stars. Gravity and other forces cause material within the disk to collide and coalesce with each other, creating celestial objects like our planets and asteroids. Image courtesy: NASA

In all of STEREO's images of Mercury's orbit, they found a consistent, five percent increase in brightness throughout and only along the planet's orbit.

The researchers reported their results last November in The Astrophysical Journal.

Twenty-five years ago, scientists discovered that the Earth's orbit around the Sun was through a giant ring of dust. A similar ring near Venus’ orbit was found in archival data from the American-German Helios space probes in 2007, confirmed in 2013 by the STEREO spacecraft.

Scientists have discovered the source of Earth's orbital dust ring: the asteroid belt between Mars and Jupiter, home to most of the system's asteroids. Any dust from asteroid collisions or crashes in the Belt pulls the dust towards the Sun, with some of the dust getting trapped in planet's orbits along the way.

A simulation of this complex movement was created by a pair of NASA Goddard astrophysicists. They modelled the dust as it spiralled toward the Sun from the asteroid belt, produced a ring that matched observations of Earth’s ring. Venus’ dust ring, on the other hand, looked a lot different.

Littered with dust whose largest grains are roughly the size of coarse sandpaper, many failed attempts led Petr Pokorny and his research partner Marc Kuchner to the one explanation that fit: a group of undetected asteroids that orbit the Sun near Venus.

"We thought we’d discovered this population of asteroids, but then had to prove it and show it works," Pokorny said. "We got excited, but then you realise, ‘Oh, there’s so much work to do.'"

For now, both the research groups have more to prove: real visual proof that these dust rings exist near Mercury and Venus. These will need space-based telescopes like Hubble, to verify, or an interplanetary space-imager like in STEREO’s.

Pokorný and Kuchner reported their results in a study published online today (12 March) in The Astrophysical Journal Letters.