Superhero spacesuits: Elon Musk’s SpaceX astronaut suit is like a Tuxedo for the Starship Enterprise

What the SpaceX suits evoke most of all is James Bond’s tuxedo if it were redesigned by Tony Stark as an upgrade for James T. Kirk’s next big adventure.

Michael Bay, the director of the 1998 cosmic disaster movie “Armageddon,” once gave an interview discussing the worst crisis in the making of the film.

“Three weeks before our first day of principal photography, I went to see the spacesuits,” Bay said. “They looked like an Adidas jogging suit on a rack. That’s where I almost killed myself.” Because, he said, if you don’t have “cool” spacesuits, the whole movie is sunk.

Apparently, Elon Musk subscribes to the same school of thought.

Or so it seems, judging from the white-and-black launch and re-entry suits astronauts Robert Behnken and Douglas Hurley will wear when they hop into their white-and-black Tesla and ride to the Cape Canaveral launchpad to climb into the white-and-black SpaceX Crew Dragon capsule for the maiden voyage of the SpaceX Falcon 9 rocket to the International Space Station. 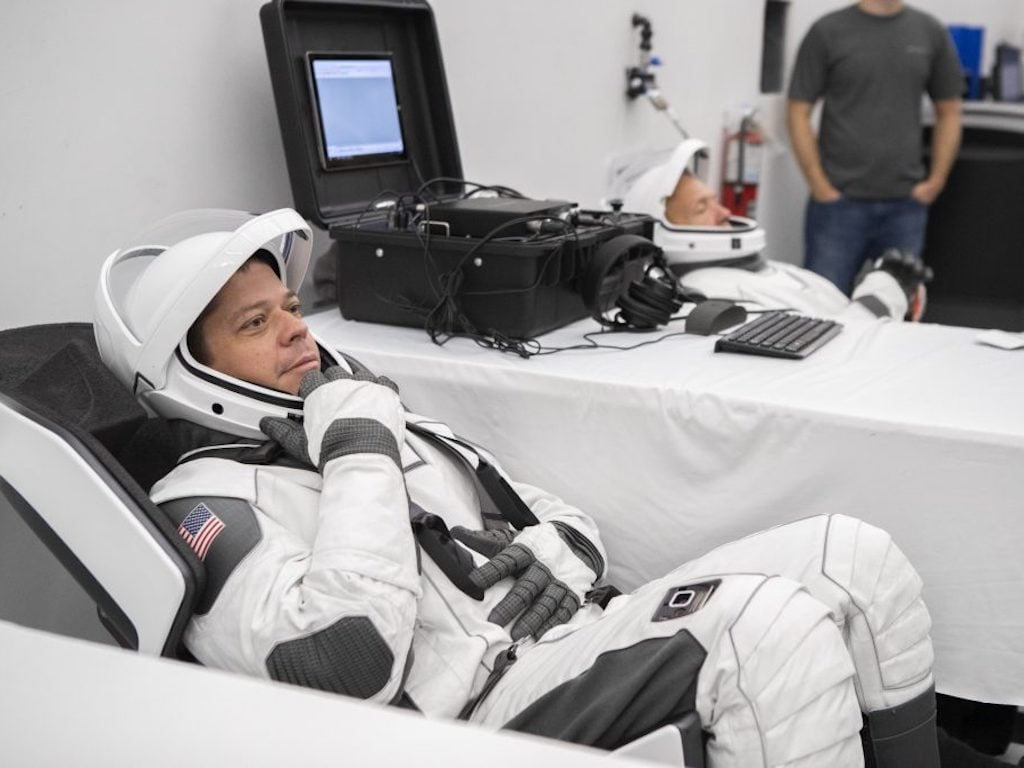 After all, when it comes to capturing the public imagination around space travel, style matters.

“Suits are the charismatic mammals of space hardware,” said Cathleen Lewis, the curator of international space programs and spacesuits at the National Air and Space Museum of the Smithsonian Institution. “They evoke the human experience.”

Actually, what the SpaceX suits evoke most of all is James Bond’s tuxedo if it were redesigned by Tony Stark as an upgrade for James T. Kirk’s next big adventure. Streamlined, graphic and articulated, the suits are more a part of the pop-culture-Comic-Con continuum of space style than the NASA continuum.

It’s little wonder, given that the prototype was created by Jose Fernandez, a costume designer who worked on “Batman v Superman,” “The Fantastic Four,” “The Avengers,” “X-Men II” and — well, you get the idea. As Bay said apropos of his “Armageddon” experience: “There are people around Hollywood that are expert designers, there are expert spacesuit helmet designers. It’s a very specialized craft.”

Musk simply went to that source rather than to the usual Air Force and Navy contractors, although when Fernandez was first contacted, he told Bleep magazine in 2016, “I didn’t know what SpaceX was.”

Invited to be one of six to try out for the job, Fernandez created a helmet (he had only two weeks) and ended up working with Musk for six months to design the suit, which was later reverse engineered to meet space travel requirements. The tuxedo associations are not an accident.

Fernandez told Bleep that during the design process, Musk “kept saying, ‘Anyone looks better in a tux, no matter what size or shape they are.’” The goal, Fernandez said, was to have the astronauts put the suit on and “look better than they did without it, like a tux.” The space program has always understood the use of visual cues, Lewis said. The Mercury suits were originally a standard Air Force green until someone painted them silver. And although there are, she said, “a lot of theories as to why,” including that the silver was reflective and made the astronauts more visible, “the most likely conclusion is it looked new and high tech.” Musk is taking that insight to a new level.

The results tap into the romance and mythology of space — the “to boldly go where no one has gone before” promise — rather than serve as an awkward reminder of tiny individuals adrift in an environment where they clearly don’t belong, as represented by the inflated Michelin Man profile of the classic spacesuits. Think of the big white ones worn by the Apollo crew for the original moon shots.

Even Boeing’s new cobalt blue Starliner suits, although sleeker than the orange ones of the Discovery launch in 2011, known as “pumpkin suits,” have the same general profile.

By contrast, the SpaceX suits speak to the traditions of the fashion industry, the way designers like Courrèges and Paco Rabanne embodied space travel in the 1960s, the time of “Barbarella,” when it was all body-con physicality and optimism.

But most of all they connect to the Hollywood tradition of the idealized human warrior body, often with exaggerated shoulders and a carapace of articulated musculature, not the high-altitude pilot’s suit that formed the basis of most previous launch suits, Lewis said.

The Musk suits have darker panels down the sides to visually taper and mould the torso, squared-off shoulder lines, aerodynamic seams from collarbone to the knee and matching knee-high superhero boots. They do not have the dangling hoses, knobs and wires of the traditional suits.

The SpaceX suits can do this partly because they are not meant for use outside the spaceship and thus do not need to be what Lewis calls “personal spaceships” equipped with an oxygen supply, cooling system and communications capabilities.

And unlike most past suits, which were designed to be comfortable for an astronaut strapped into a couch and often looked baggy and hunchbacked when vertical, the SpaceX suits look as neat standing up as they do reclining.

They also fulfil the myriad and demanding technical requirements of what is an entirely functional garment. A spacesuit is a piece of hardware that must connect to the ship, not just colour coordinate with it. That is what distinguishes the suits as an Elon Musk production.

“As long as space travel was being subsidized by governments, there was no need to make the suits attractive, as the astronauts’ safety was the sole concern,” Gary Westfahl, the author of “The Spacesuit Film: A History, 1918-1969,” wrote in an email. “Yet, if space travel is going to become an activity of private companies seeking profits, they have a natural interest in making their astronauts seem attractive.” (There’s a reason Richard Branson hooked up with Under Armour when he was looking for a designer for his Virgin Galactic uniforms, which are aesthetically somewhere between the NASA past and the SpaceX present.)

Like Steve Jobs before him, Musk has long prioritized the importance of design in technology. In 2016, he told the startup incubator Y Combinator that he spent about 80% of his time on engineering and design.

He understands that the look of something is part of the story it tells. It can create an emotional connection that translates into market power, as well as subliminal recognition of a group that comes from a shared identifiable style.

This is an insight borrowed from the fashion world, a sector Musk flirted with for a while: He used the Met Gala in 2018 to unveil his relationship with the musician Grimes and was profiled in Vogue in 2015 (with a photo of him in a spacesuit). And he is not the only Musk involved in fashion: His mother, Maye Musk, is a very successful model.

“It’s smart branding because it signals we are starting a new age,” said Lewis, who is hoping to acquire a SpaceX suit to add to the 278 spacesuits, prototypes and suit pieces already in the Smithsonian’s collection. It is the age of commercialized spaceflight, with all the brand extension opportunities that imply.

Indeed, what the SpaceX suits may represent above all is the ultimate in that previously dismissed initiative: wearable technology. We just have to see what Jeff Bezos comes up with for Blue Origin.