Electric vehicles can be a sustainable solution for reducing air pollution in Indian cities and bring down India’s oil import bill.

For a country like India, where high levels of air pollution in cities is slowly turning into a national emergency, large scale adoption of electric vehicles powered by renewable power can be a win-win situation for all stakeholders. And while the authorities in India are making all the right noises by encouraging a mass shift to electric vehicles (EVs), there is an evident need for clear goals backed by regulations along with a strategy to deter non-compliance.

Experts stress that any e-vehicle mandate adopted in India will need to have sound legal backing, a well-defined timetable for intermediate goalposts and adequate lead time for manufacturers and fleet managers of all sizes to plan a smooth transition. Currently, India does not have a comprehensive national plan for EVs with clear targets. The Indian government had first started backing the development of EVs way back in 2010. The efforts though picked up momentum during the first tenure of the National Democratic Alliance government between 2014-19. In 2015, the central government had notified the FAME India Scheme (Faster Adoption and Manufacturing of Hybrid and Electric Vehicles in India) to give a boost to the EV market.

Subsequently, the central government’s encouragement and support for the sector continued over the years. In September 2018, the Indian government’s think tank, the NITI Aayog, came out with a report that said India has a lot to gain by converting vehicles running on fossil fuel to EVs. It said that the country could considerably reduce its crude oil import bill and prevent pollution across the nation. For instance, the report noted that India has over 170 million two-wheelers and shifting them to EVs could, even by conservative estimates, result in saving of over Rs. 1.2 trillion annually. But it stressed that it would require a comprehensive policy regime.

In the same month, the Prime Minister in a speech promised a stable policy regime for EVs as well, emphasising the government’s commitment to encourage electric mobility.

Thereafter, in March 2019, the central government’s department of heavy industry notified the phase-II of FAME India Scheme for a period of three years starting April 2019 with budgetary support of Rs. 100 billion (Rs. 10,000 crores). Under this second phase, the government would support the electrification of public and shared transportation, which would include 7000 electric buses, 500,000 electric three-wheelers, 55,000 electric four-wheeler passenger cars and one million electric two-wheelers through demand incentives, according to the Indian government’s Minister of Heavy Industries and Public Enterprises Arvind Ganpat Sawant.

“In addition, creation of charging infrastructure will be supported in selected cities and along major highways to address range anxiety among users of electric vehicles,” Sawant told Lok Sabha while replying to a query in July 2019.

In March 2019, the union cabinet had also approved setting up of a National Mission on Transformative Mobility and Battery Storage, to drive “clean, connected, shared, sustainable and holistic mobility initiatives” which included a Phased Manufacturing Programme (PMP) valid for five years, till 2024. This programme would support setting up of a few large-scale, export-competitive integrated batteries and cell-manufacturing plants in India and creation of a PMP to localise production across the entire electric vehicle value chain.

The plan to shift to EVs also fits well into the current government’s plan to combat climate change by reducing dependence on fossil fuel and reduce pollution across Indian cities.

Successive reports over the past few years have highlighted that most of the Indian cities are choking from toxic air pollution which includes a significant contribution from the vehicle emissions. Inaction or lack of sufficient action by the government to tackle pollution is one of the major criticisms of the Modi government by civil society and courts. So, just before the 2019 Lok Sabha elections, when environmental issues like clean air and water emerged as major issues, especially for the urban population, the Bharatiya Janata Party in its manifesto promised a major push for e-mobility. In its manifesto, BJP had emphasised that it wants to make India a world leader in e-mobility stating that Rs. 100 billion has already been allocated for this sector and the party will further “work on this front to ensure the expansion of this new mobility experience.”

Soon after winning the election, the NDA government in its second avatar has, as promised, has taken a number of decisions to encourage the sector.

In the budget presented by the Finance Minister Nirmala Sitharaman, she said, considering India’s large consumer base, “we aim to leapfrog and envision India as a global hub of manufacturing of electric vehicles.”

Talking about efforts to promote the use of electric vehicles, Sitharaman in her budget speech said, “Inclusion of solar storage batteries and charging infrastructure in the above scheme will boost our efforts. Government has already moved GST (Goods and Services Tax) council to lower the GST rate on electric vehicles from 12 to 5 percent. Also to make electric vehicles affordable to consumers, our government will provide an additional income tax deduction of 1.5 lakh (Rs 150,000) on the interest paid on loans taken to purchase electric vehicles. This amounts to a benefit of around 2.5 lakh (Rs 250,000) over the loan period to the taxpayers who take loans to purchase an electric vehicle.”

She also announced that to further incentivise e-mobility, customs duty is also being exempted on certain parts of electric vehicles.

Apart from the central government, the public sector bank State Bank of India has declared ‘green loans’ for EVs with preferential interest rates and the Insurance Development Authority of India (IRDAI) announced discounts for private EV buyers in the mandatory third-party insurance.

Additionally, several state governments like Karnataka, Maharashtra, Andhra Pradesh, Telangana, and Delhi have come out with decisions to encourage the EVs.

Jasmine Shah, who is the vice-chairperson of the Dialogue & Development Commission (DDC), a think tank and advisory body for Delhi government that is involved in the development of the city’s draft EV policy, emphasised that the city government started its initiatives on clean mobility around three years ago. 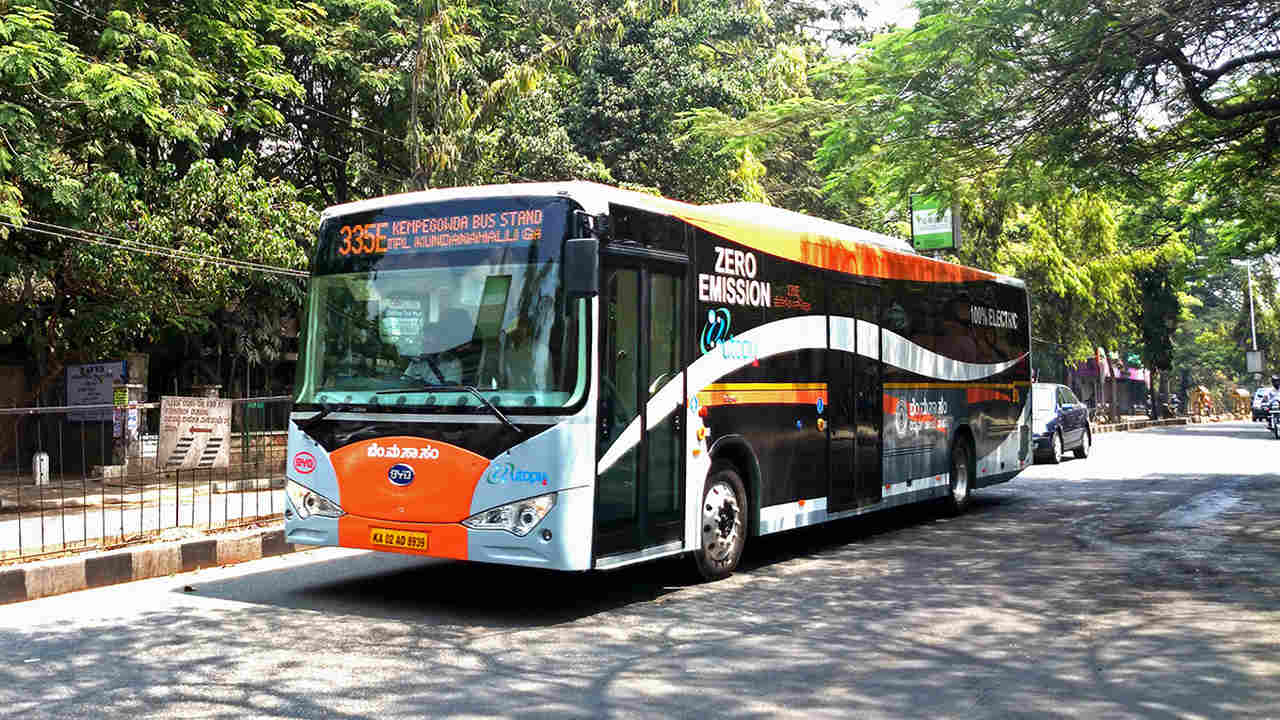 An electric bus in Bengaluru. Experts emphasise that while a lot has been done by the government to encourage e-mobility, clear goals and regulations are needed to make the transition successful.image credit:Ramesh NG/Flickr.

“We came out with a comprehensive draft EV policy last year but since then we realised the complexities … We are now at a stage of bringing out a final EV policy. In five years, we envisage a quarter of all newly registered vehicles to be electric. Delhi government has already announced the induction of 1,000 electric low floor buses to the city’s public transport fleet. Of them, 385 buses are in the advanced stage of tender evaluation. We want to ensure that the entire sector takes off …our push for EVs means supporting the entire ecosystem. We have a comprehensive vision,” said Shah.

While replying to Mongabay-India’s query about whether the power to charge the EVs would be conventional energy or renewable energy, Shah said they are trying to “ensure it comes from the solar power but right now it is going to be from the grid.”

He said they are also looking at other ideas like supporting the replacement of old vehicles with EVs.

Compared to other countries, India’s EV market is in the early stages

In December 2017, the Society of Indian Automobile Manufacturers (SIAM) had come out with a white paper on EVs, ‘Adopting pure electric vehicles: Key policy enablers’, which sought a series of policy demands from the industry. Less than two years later, the central and state governments together have made significant progress on more than half of those policy demands.

An analysis by the International Council on Clean Transportation (ICCT) indicates that with the existing level of incentives offered by the central government and states like Delhi, the total cost of ownership for EVs is competitive compared to conventional models in the two-wheeler and bus segments, but additional policy effort is required on electrification of cab aggregator fleets.

However, India’s EVs market is still in an early stage when compared to the United States, China and the European Union. Experts emphasise that what the sector requires is a continued investment in charging infrastructure, fiscal and non-fiscal incentives for EVs and a clear mandate for all stakeholders to shift to EVs.

It is estimated that 98 percent of all global electric vehicles are in China, Europe, Japan, and the United States, with China comprising more than 50 percent of the market. For instance, it is estimated that as of 2018, the global inventory for electric two-wheelers was around 260 million units with more than 98 percent sales taking place in China. Compared to that, India’s stock of electric two-wheelers was around 0.6 million units only.

Similarly, the electric three-wheeler stock in China in 2018 was over 50 million units in comparison to 2.38 million units in India. The picture is the same in the passenger vehicle segment where the global stock is more than six million while in India it around 10,000 units.

According to experts, compared to India, the other countries that have a high number of EVs have supporting factors like financial incentives, widespread availability of charging infrastructure, consumer awareness initiatives, mandates for manufacturers, government procurement and fleet operators to transition to EVs.

“In 16-17 months, the government has done a lot, and a variety of incentives are now in place. What the sector requires now is a regulatory target for each manufacturer of selling a particular number of electric vehicles to create a supply of diverse electric vehicle models. India needs to ensure that the targets fixed are complied with much like the fuel efficiency standards. Unless we put in place some sort of targets it is not going to work,” said Anup Bandivadekar of the ICCT.

Bandivadekar gave an example of California in the US which was the first state to issue a zero-emission vehicle mandate. In 2015, car manufacturers offered 22 different EV models in California, while no other state in the US was offered more than 14.

“By 2018, the number of zero-emission vehicle models for sale in California increased to above 40 and they are expected to increase to nearly 80 by 2021,” he said.