WHO warned against indiscriminate use of steroids, emphasizing that patients who are not severely ill are unlikely to benefit and may suffer side effects.

Based on the new evidence, the World Health Organization issued new treatment guidance, strongly recommending steroids to treat severely and critically ill patients, but not to those with mild disease.

“Clearly, now steroids are the standard of care,” said Dr Howard C. Bauchner, the editor-in-chief of JAMA, which published five papers about the treatment.

The new studies include an analysis that pooled data from seven randomized clinical trials evaluating three steroids in more than 1,700 patients. The study concluded that each of the three drugs reduced the risk of death.

JAMA published that paper and three related studies, along with an editorial describing the research as an “important step forward in the treatment of patients with COVID-19.”

Corticosteroids should now be the first-line treatment for critically ill patients, the authors said. The only other drug shown to be effective in seriously ill patients, and only modestly at that, is remdesivir.

Steroids like dexamethasone, hydrocortisone and methylprednisolone are often used by doctors to tamp down the body’s immune system, alleviating inflammation, swelling and pain. Many COVID-19 patients die not of the virus but of the body’s overreaction to the infection.

In June, researchers at Oxford University discovered that dexamethasone improved survival rates in severely ill patients. Researchers had hoped that other inexpensive steroids might help these patients.

The evidence had been lacking: After the Oxford researchers made their announcement, some clinical trials of steroids were halted, as doctors were loathe to withhold what appeared to be an effective treatment from study participants.

Steroids can have harmful side effects, especially in elderly patients, who make up the majority of very ill coronavirus patients. The drugs may leave patients vulnerable to other infections, may raise blood glucose levels, and may cause confusion and delirium. 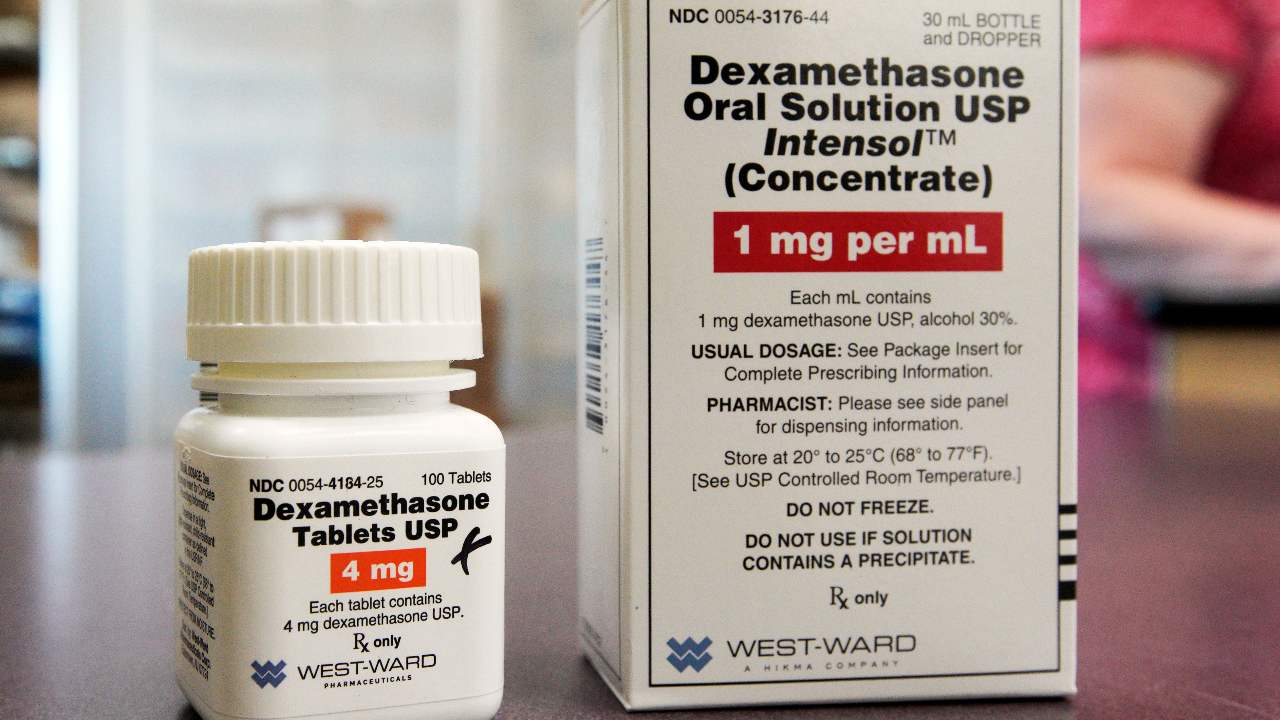 This file photo shows a bottle and box for dexamethasone in a pharmacy in Omaha, Neb. On Friday, July 17, 2020, British researchers published a report on the only drug shown to improve survival -- the inexpensive steroid dexamethasone. Two other studies found that the malaria drug hydroxychloroquine does not help people with only mild coronavirus symptoms. Image credit: AP Photo/Nati Harnik

In the clinical trials, only the sickest patients were treated with steroids, and it is not certain that those who are less ill will benefit or be harmed. The optimal doses and duration of treatment also need to be identified.

But overall, the scientists said, the new studies appeared to confirm the promise of this class of drugs for patients severely ill with COVID-19.

The studies “are like the second punch of a one-two punch,” said Dr Derek C. Angus, chair of the department of critical care medicine at the University of Pittsburgh, who co-authored one of the new studies and the analysis.

“I had a big smile on my face when I saw the results,” Angus added. “This is a case of, ‘A question asked, a question answered,’ and that’s so rare.”

The analysis of pooled data found that steroids were linked with a one-third reduction in deaths among critically ill COVID-19 patients. Dexamethasone produced a 36 percent drop in deaths in 1,282 patients treated in three separate trials.

Hydrocortisone, tested in 374 patients in three trials, appeared to reduce deaths by 31 percent, and a small trial of methylprednisolone in 47 patients resulted in a nine percent drop in deaths. The analysis was carried out by a WHO working group that is making efforts to rapidly evaluate COVID-19 therapies.

Taken together, the new studies will bolster confidence in the use of steroids and address any lingering hesitancy on the part of some physicians, said Dr Todd Rice, an associate professor of medicine and critical care physician at Vanderbilt University School of Medicine.

In new guidance, the WHO warned against indiscriminate use of steroids, emphasizing that patients who are not severely ill are unlikely to benefit and may suffer side effects. Unwarranted use could deplete global supplies, depriving patients who genuinely need the medications.

The health organization started work on its guidance in June, shortly after Oxford University published a preliminary report of its findings, partnering with investigators of seven clinical trials in order to conduct a meta-analysis and provide additional evidence in the most expeditious manner, WHO officials said.

They characterized the quality of the evidence in favour of steroid treatment for severely ill patients as one of “moderate certainty.”

Among the other studies published Wednesday was a Brazilian trial of 299 patients with acute respiratory distress syndrome that compared dexamethasone treatment with regular care. The steroid significantly improved outcomes, increasing the number of days patients were alive and free of mechanical ventilation.

Another study in France evaluated low doses of another steroid, hydrocortisone, in 148 patients. Those receiving the drug were more likely to survive, but the results were not statistically significant because the trial was stopped early.

A third study tested varying hydrocortisone regimens in 400 seriously ill COVID-19 patients in eight countries. It was also stopped prematurely, but the researchers concluded there was a strong probability that the treatment improved outcomes.

When the Oxford results were announced in June, physicians worldwide started using dexamethasone.

“I think there was some uncertainty about whether the effect was real,” said Rice, who co-authored an editorial accompanying the new papers in JAMA.

“This shows us steroids are clearly beneficial in this population and should clearly be given unless you absolutely can’t for some reason, which needs to be a pretty rare occasion.”

The drug remdesivir modestly shortens time to recovery in critically ill COVID-19 patients, he noted but has not been shown to reduce fatalities.

“People are dying from this disease, and we want treatment that we are confident will decrease mortality and save people’s lives,” Rice said.

WHO experts back second COVID booster for people most at risk