Five years after he was paralysed in a snowmobile accident, a man in the US has learned to walk again aided by an electrical implant, in a potential breakthrough for spinal injury sufferers.

A team of doctors at the Mayo Clinic in Minnesota say the man, using a front-wheeled walker, was able to cover the equivalent of the length of a football pitch, issuing commands from his brain to transfer weight and maintain balance – all previously thought impossible for paralysed patients.

The man, now 29, severed his spinal cord in the middle of his back when he crashed his snowmobile in 2013.

He is completely paralysed from the waist down, and cannot move or feel anything below the middle of his torso.

In the study, the results of which were published on Monday, 24 September, in the journal Nature Medicine, doctors in 2016 implanted a small electronic device in the man's spine.

The wirelessly operated implant, about the size of a AA battery, generates electrical pulses to stimulate nerves that – due to the injury – had been permanently disconnected from the brain. 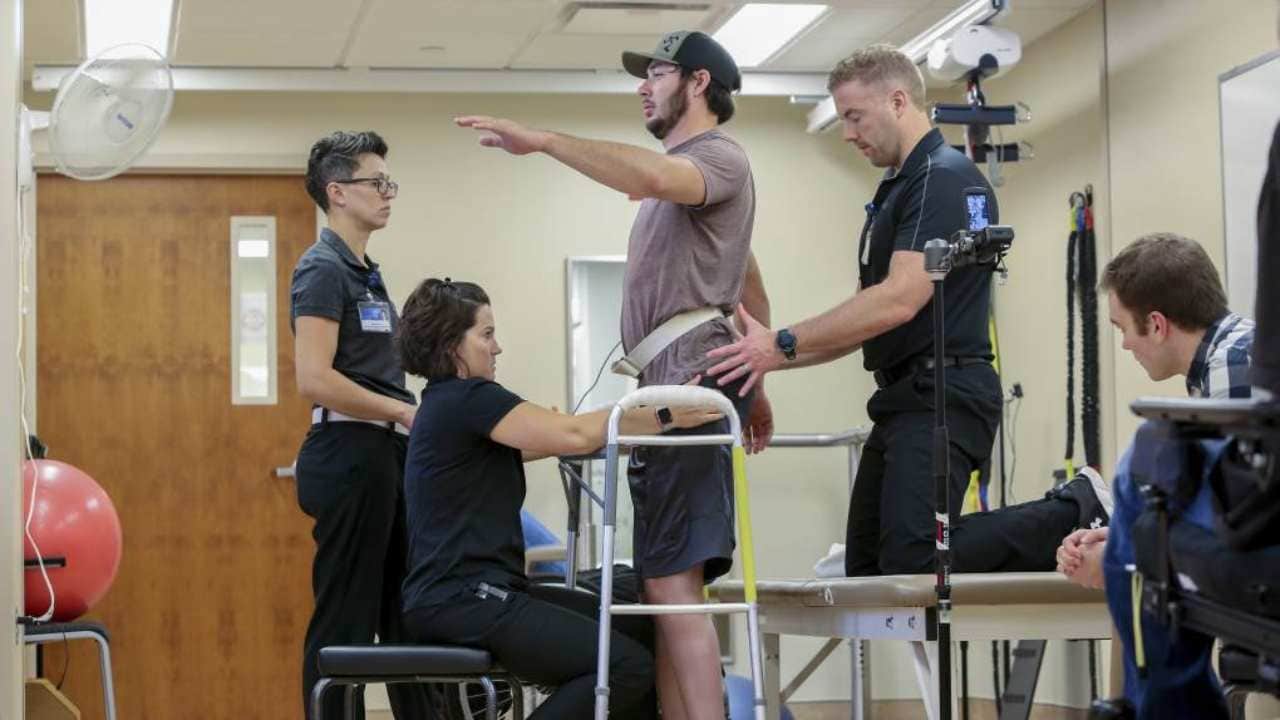 Jered Chinnock, who received the spinal implant, stands with the assistance of his therapy team at the Mayo Clinic in Rochester, Minnesota. AP

"What this is teaching us is that those networks of neurons below a spinal cord injury can still function after paralysis," said Kendall Lee, neurosurgeon at the Mayo Clinic and lead study author.

Within weeks of the device being switched on, the man began to take his first steps since the accident – but was still suspended in a harness.

Astonishingly, after several more sessions of rehab and physiotherapy, he was able to support most of his own body weight and take steps on a treadmill.

"We didn't limit our expectations and continued to safely advance his performance as he gained function," Kristin Zhao, director of the Mayo Clinic's Assistive and Restorative Technology Laboratory, told AFP.

"This is important because the patient's own mind was able to drive the movement in the legs," she said.

Although the device was able to help generate power and control in the patient's lower body, it did nothing to restore sensation in his legs.

This initially proved challenging. Without the physical feeling of walking registering in his brain, it was hard for him to make the instantaneous balance adjustments most of us make without thinking.

The team overcame the problem by installing mirrors at knee height so the patient could see what position his legs were in while walking.

Eventually the man was able to walk on the treadmill with only periodic glances down at his legs.

Footage of the experiment shows him walking jerkily on a slow-moving treadmill, using a metal rail for balance.

While the device's effect is remarkable, the man is still paralysed once it is turned off.

"It is important to understand that even with the success that this individual had in stepping ability during the research, he still performs his daily activities from a wheelchair," Lee told AFP.

In 2011, electrodes implanted on the lower spine of a paraplegic man allowed him to stand and regain some movement in his legs, but the team believes this is the first instance an implant has been used to get a paralysed person to walk.

For safety reasons, the patient currently only uses the device under supervision, but the implications of the study – that paralysis may not be permanent after severe spinal injury – could be massive.

"Our results, combined with prior evidence, emphasise the need to reassess our current understandings of spinal cord injury in order to realise the potential of emerging technologies for functional recovery once thought to be permanently lost," Lee said.

The study was conducted in conjunction with the University of California Los Angeles and was partly funded by the Christopher and Dana Reeve Foundation.

Christopher Reeve, best known for starring role in the "Superman" film, was left paraplegic after a horse-riding accident in 1995.