France announced it will build “bodyguard” satellites armed with machine guns or lasers after the US announced a space force.

At an upcoming summit in early December, NATO is expected to declare space as a “warfighting domain”, partly in response to new developments in technology.

If it does declare space a war zone, NATO could start using space weapons that can destroy satellites or incoming enemy missiles. But what is this technology and how could it enable a war?

In a recent first for space technology, Russia has launched a commercial satellite specifically designed to rendezvous with other satellites. The purpose of this vehicle is peaceful: it will perform maintenance tasks on other satellites in orbit. 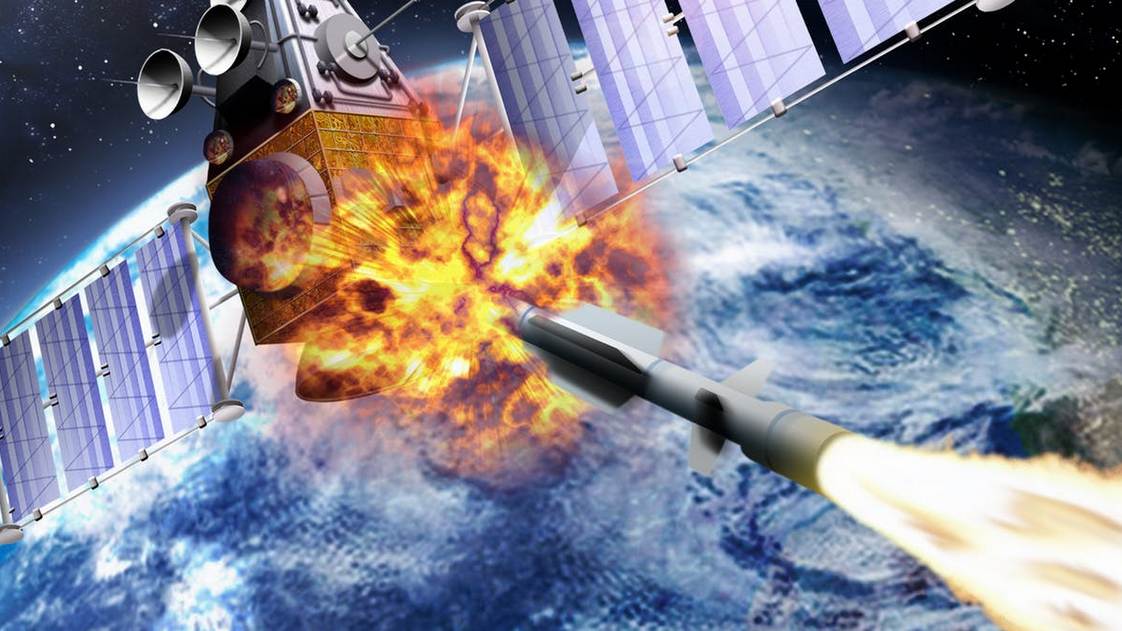 The fact that commercial companies have this capability probably means that it already exists for global military powers. This has caught the attention of NATO. If a country or company can manoeuvre its own satellites into close proximity of others, then it can do so for military or sabotage purposes – potentially without detection.

Another development is France’s recent announcement that it will build “bodyguard” satellites armed with either machine guns or lasers. This follows an announcement that the US will launch a space force in 2018. Many other nations may soon follow suit.

But how would sabotage and warfare happen exactly? One method involves firing an intense beam of microwave radiation at an object. In fact, such concepts have been tested before by the police as a means of bringing a speeding car to a halt by disabling electrical devices on the vehicle.

Such a concept deployed on satellites would constitute a “directed-energy weapon”, enabling nations to disable other countries’ satellites without creating large clouds of orbital debris. You could potentially make such an attack look like an accident and deny involvement.

The use of “radio jamming” to disrupt radar and communications date back to World War II. By swamping a radio receiver with, effectively, radio noise, one can obscure the reception of genuine signals and render the system inoperative. This is a little like trying to spot the light from a candle against the glare of car headlights. Satellites are thoroughly tested for self generated radio noise before going into space. But if a “hostile” satellite nearby were to deliberately direct broadband radio transmissions at the target satellite, then communications could be completely disrupted.

Space-based electronic warfare is likely to become an increasing concern for military planners. In fact, many military services on Earth now depend on space technology to work.

By far the most obvious method of interfering with a satellite is a solid projectile. Moving satellites have very high kinetic energy and momentum. If a slower moving object can be placed briefly in the path of a satellite, then the resultant collision will be particularly devastating.

These so called “kinetic kills” have previously only been used to take satellites out of commission at the end of their life, with the US, Russia China, and India demonstrating their ability to perform this. This type of removal consists of a ground-launched missile aimed at the satellite. If aimed at an adversary satellite, such a missile would be fairly obvious and could be tracked by other nations using radar.

A more subtle method would be to destroy a satellite owned by the country or company launching the missile and aim to produce as much debris as possible, which then lies in the orbital path of the intended target. This could look like an accident and actually accidentally occurred in 2007.

As far as kinetic weapons in space are concerned, machine guns are generally problematic due to the recoil involved. If the weapon is fired at any angle which is not in the exact direction of the orbital path the satellite is travelling along, then a torque will be applied, rapidly changing the direction of it. The idea of kinetic weapons has been attempted before. The Soviet space station Salyut-3, for example, was armed with a rapid fire cannon in the mid 1970s.

Lasers are also being considered as defensive weapons, with the idea being to take out attacking satellites’ solar panels. With no power, the satellite will be unable to communicate with the ground station and is essentially lost. The recoil from a laser is much smaller and the lack of atmosphere would allow them to perform better than on the Earth’s surface.

A laser could be used to blind instrumentation on an opposing satellite thereby reducing the efficacy of either rendezvous or aiming software.

The most likely satellites to be targeted would be those dedicated to communication or observing. With the newest research satellites able to take images down to a 30cm resolution, military versions are likely to be even better. A nation with no communication facilities or ability to observe others will never know who has launched an attack against them.

But what would a space war look like from Earth? While sci-fi films have conditioned us to believe that space lasers would use visible light, shorter wavelengths actually produce more power. Any observers on the surface would be unlikely to directly see any effects from space warfare, unless a kinetic kill actually breaks a spacecraft up – with debris lighting up as it re-enters the atmosphere. That said, attacks could still affect our lives on Earth, disturbing GPS, television services and even cash withdrawals.

The use of nuclear weapons and weapons of mass destruction in space is currently banned under the Outer Space Treaty and the Comprehensive Nuclear-Test-Ban Treaty. But not all nuclear-armed nations have ratified the latter, including the US and North Korea.

A small number of nuclear tests in space were conducted in the 1960s including Starfish Prime. These resulted in artificial radiation belts forming around the Earth which were still detectable decades after the event – posing a danger for astronauts. These radiation belts also disabled half a dozen satellites in low Earth orbit. If the results of Starfish Prime are anything to go by, then clearly it would take only a handful of nuclear detonations to make space unusable for any satellites for decades to come.

Given the options now becoming available, it seems important to remember that, under the Outer Space Treaty, space is supposed to be used only for peaceful purposes and remain the domain of “all mankind”.

Explained: How the upcoming NATO summit plans to keep Russian aggression in check