Earth's magnetic field has been weakening across a wide stretch of area for reasons unknown. Scientists have found the magnetic field from Africa to South America to be gradually weakening.

Earth’s magnetic field has been weakening across a wide stretch of area for reasons unknown. Scientists have found the magnetic field from Africa to South America to be gradually weakening.

While researchers are digging into data to learn more about the area known as ‘South Atlantic Anomaly’, the phenomenon is causing technical disturbances in satellites orbiting the earth.

Experts from the European Space Agency (ESA) have warned that the changing magnetic field can affect the spacecraft in the region.

Earth’s magnetic field is a complex and dynamic force that helps in sustaining life by shielding us from cosmic radiations and other charged particles from the Sun.

It works on the basis of dynamo effect and the molten metals in the earth's core create electric currents. These, in turn, generate the
electromagnetic field of the planet.

The weakening of magnetic field gives rise to speculations that Earth is heading for an eminent pole reversal, a phenomenon in which north and south poles switch places.

According to the data given by the ESA, the magnetic field has lost nearly nine per cent of its strength on a global average in the last 200 years. This year, the “minimum field strength” in the South Atlantic Anomaly has seen a drop of around 24,000 nanoteslas to 22,000 from its strength in 1970. 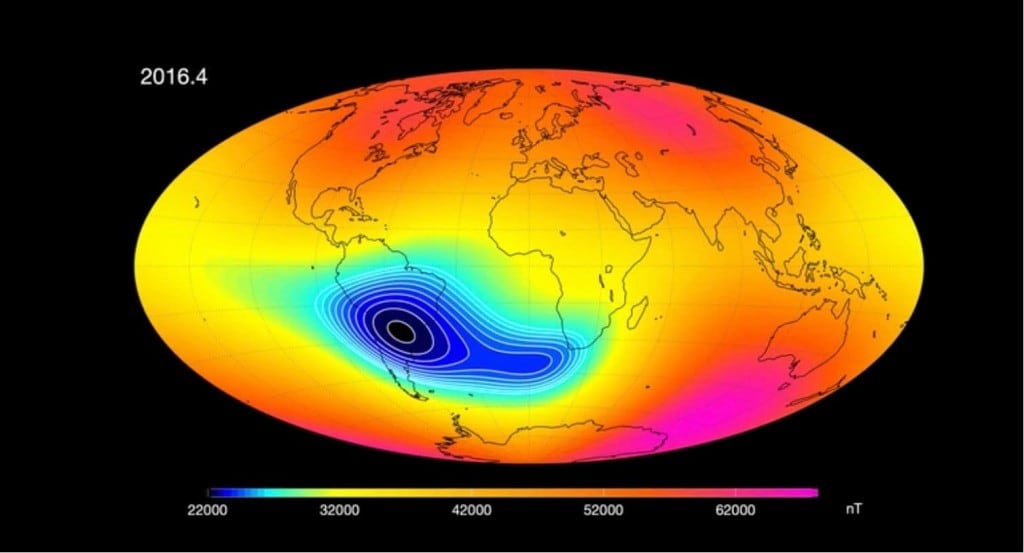 The area of anomaly has also grown in this period. The patch has also moved farther west at a rate of roughly 12 miles per hour over the last 50 years.

Moreover, another centre of minimum intensity has emerged in the anomaly in the past five years, which can possibly lead to the spilt up of the South Atlantic Anomaly.

Scientists from the Swarm Data, Innovation and Science Cluster (DISC) are using data from ESA’s group of Swarm satellites to better understand the occurrence.

“The new, eastern minimum of the South Atlantic Anomaly has appeared over the last decade and in recent years is developing vigorously,” said Jurgen Matzka from the German Research Centre for Geosciences.

He added, “We are very lucky to have the Swarm satellites in orbit to investigate the development of the South Atlantic Anomaly."