The rare and recent discovery also shows that galaxies could shut down as a result of mergers.

Even though galaxies are known to die out, scientists never could witness the process of a galaxy dying out, until now. Using a high tech telescope, scientists saw the galaxy, ID2299, ejecting out the star forming gases and losing its fuel. As per a press statement, the Atacama Large Millimeter/submillimeter Array (ALMA) spotted the galaxy ejecting nearly half of its star-forming gas. Also, the speed of this ejection was “equivalent to 10,000 Suns-worth of gas a year”. The European Southern Observatory (ESO) was a partner in the observation and the team thinks that this celestial event has been triggered by a collision with another galaxy.

As per the statement, galaxies begin to 'die' when they stop forming stars. Now they are getting to actually see how the process takes place. The galaxy is nine billion years away. Hence, what we are seeing now is when the Universe was just 4.5 billion years old.

“This is the first time we have observed a typical massive star-forming galaxy in the distant Universe about to ‘die’ because of a massive cold gas ejection,” said lead researcher Annagrazia Puglisi, who is associated with the Durham University, UK, and the Saclay Nuclear Research Centre, France. 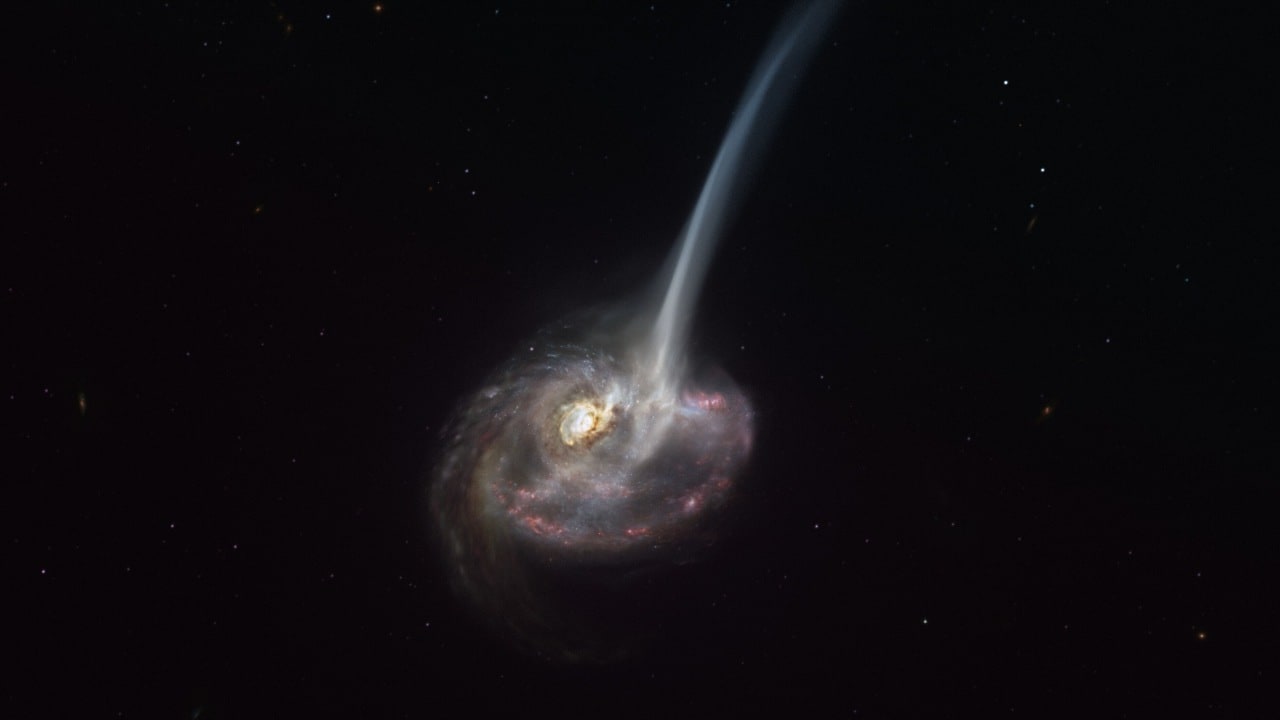 Galaxy mergers could inhibit star formation. This artist's impression of ID2299 shows the galaxy, the product of a galactic collision, and some of its gas being ejected by a "tidal tail" as a result of the merger. Image credit: ESO/M Kornmesser

Apart from ejecting out material, the galaxy is also forming stars. The rate of creating stars is very rapid, almost hundreds of times faster than our galaxy, the Milky Way. The result of this fast creation will be that the remaining gas in ID2299 will be consumed gradually, over a few tens of millions of years.

Earlier, it was believed that winds caused by star formation and the activity of black holes at the centres of giant galaxies caused the ejection of star-forming material into space. But the recent case shows that mergers of galaxies can also lead to the shutting down of a galaxy.

“ALMA has shed new light on the mechanisms that can halt the formation of stars in distant galaxies. Witnessing such a massive disruption event adds an important piece to the complex puzzle of galaxy evolution," said Chiara Circosta, a researcher at the University College London who was part of the research. The study has been published in the journal Nature Astronomy.