After a game that lasted 6 days, researcher X emerged as the winner of this tiny DNA game of Xs & Os

The future of nanotechnology is in stands today, and it could be at the mercy of a tiny game of tic-tac-toe played by researchers at the California Institute of Technology (Caltech).

In a proof-of-concept for 'DNA origami', Caltech researchers used a new technique to create tiny structures out of DNA strands, and then played a game of tic-tac-toe with it using the DNA board, because why not?

The DNA origami technique makes use of a natural tendency of bases (units) of DNA to pair up with each other. Of the four bases in DNA – Adenine (A), Guanine (G), Thymine (T) and Cytosine (C) – A and T always go hand-in-hand, and so are C and G.

In the body, all of our DNA is paired up with these matches — a DNA strand with a sequence like GATCAATC, for instance, will pair perfectly with the sequence CTAGTTAG on another, "complementary" strand of DNA. Researchers improvized on this property of DNA to make shapes by simply manipulating the sequences of letters in it.

While this is the normally the case, there are also times when part of a DNA strand can pair up with part of another. Picture a 3-way zipper where each individual zip is pulled halfway down, and both its free arms can pair with different zippers of their own.

Caltech tried to explain this mechanism using a passe analogy of dating, with graphics of one strand dumping another strand it has only 5 of 8 matching bases for another strand that makes for a better match, in which 6 of its 8 bases match. This "stand replacement" combined with a DNA origami technique was described in a paper published this week in Nature Communications, where researchers created square-shaped tiles of DNA that fit together in a network, like a puzzle.

In their demonstration, researchers put 9 blank tiles of DNA into a test tube, and once the tiles were neatly assembled on a base, the team went around one after adding Xs and Os to the tube. The X and O tiles that were added to the tube were simple better matches for the base spots than the blank tile.

After a 6-day-long game, researcher X emerged as the winner of this tiny game of X and O.

Changing the shape of DNA could have many applications in the future, including drug delivery and sort of molecular cargo, both of which are already being actively researched. 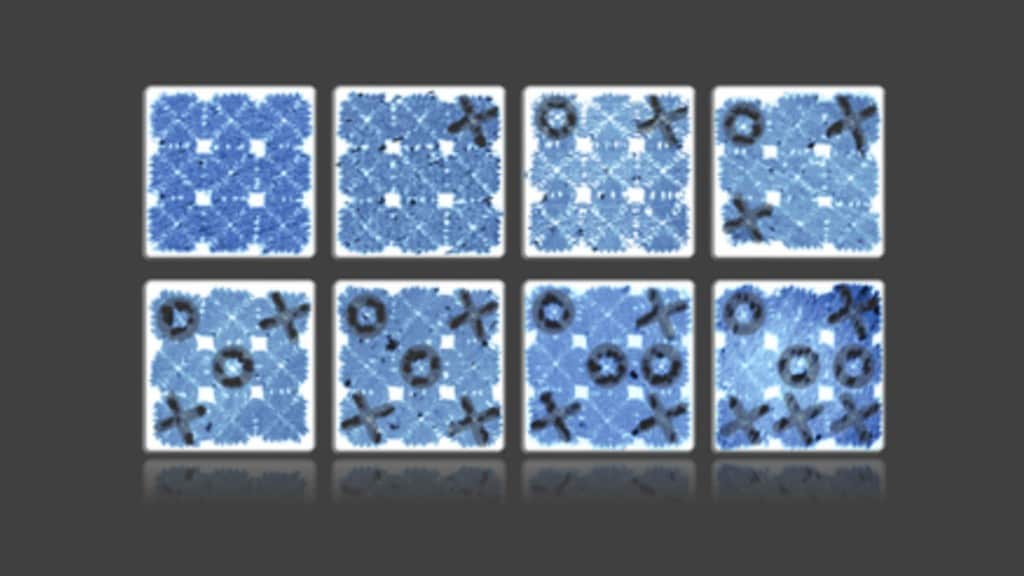 Unlike previous techniques where the structures are locked in place after they are created, the Caltech team could reshape the already-built DNA board using this new method.

“When you get a flat tire, you will likely just replace it instead of buying a new car. Such a manual repair is not possible for nanoscale machines,” Grigory Tikhomirov, one of the Caltech researcher said in a news release.

“But with this tile displacement process we discovered, it becomes possible to replace and upgrade multiple parts of engineered nanoscale machines to make them more efficient and sophisticated.”