Scientists may have found the elusive 'missing matter' in the universe

In recent years, calculations of how much matter exists in the universe have pointed to one fact: there's more matter in the estimates than researchers have accounted for.

If that wasn't unsettling enough, the "missing" extra matter also accounts for almost one-third of the mass in the universe. This is a massive difference, and scientists have been on the hunt to find out what it is for decades.

A new technique developed by Harvard astronomers to scan the cosmos and could be a huge help to astronomers in spotting the missing celestial matter.

The substance they're looking for is unconnected to dark matter – the other elusive and invisible material that 85 percent of the universe is made of. Researchers from Harvard and the Eötvös University in Hungary have found the missing matter is luminous, or glowing – like stars, planets and other objects in the cosmos do from a distance. An illustration of what the WHIM filaments will likely look like. Image courtesy: NASA's Chandra

Many independent and reputed research teams have calculated the mass of the universe after the Big Bang. By the first billion years after the Big Bang, a lot of the cosmic dust and gases had taken form, findings its place in the stars and planets visible through the telescope today.

However, by adding up all the known, expected sources of mass in the Universe, researchers still can't account for over 30 percent of the mass it actually has – mass over and above dark matter.

One theory suggests that giant strands of 'warm' and 'hot' gas (like streamers) stretch across intergalactic space, known as "warm-hot intergalactic medium" or WHIM.

While they are invisible to optical telescopes, WHIMs can be detected using ultraviolet light. Using a new imaging technique, researchers have found evidence for the 'hot' component of WHIMs using data from NASA's Chandra telescope and others. The universe is expanding over time and under the influence of gravity, will create a cosmic web of structures like these. The web contains both dark and normal matter. Image: Western Washington University

"If we find this missing mass, we can solve one of the biggest conundrums in astrophysics," Orsolya Kovacs from Harvard & Smithsonian Center for Astrophysics (CfA) in Cambridge, Massachusetts, said in a press release. "Where did the universe stash so much of its matter that makes up stuff like stars and planets and us?"

Kovacs and her team are looking only in the X-ray region of the light spectrum for answers to what the substance could be. Since the universe is constantly expanding, light is stretched out as and when it travels. Researchers expect WHIM filaments to absorb X-rays as well as light in the red wavelengths, which is something that can be detected by very sensitive telescopes today.

"Our technique is similar in principle to how you might conduct an efficient search for animals in the vast plains of Africa," Akos Bogdan, a co-author of the research from CfA. "We know that animals need to drink, so it makes sense to search around watering holes first." 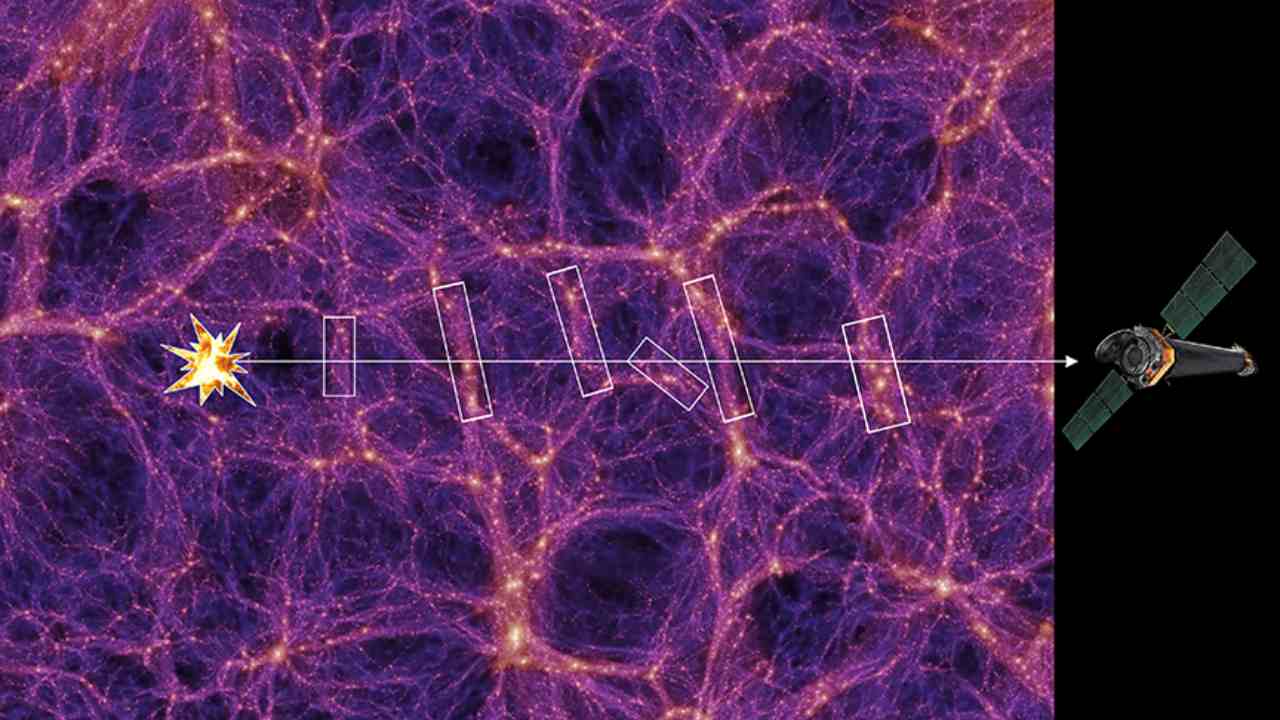 The path of light through multiple different strands for the detector to pick up on easier. Image: NASA Chandra

Researchers looked for oxygen molecules around these WHIMs that behave in distinct ways in space – having temperatures around one million degrees Kelvin, for one.

By extrapolating their findings from the oxygen study to the known, local universe, researchers managed to explain all of the missing matter.

"We were thrilled that we were able to track down some of this missing matter" Randall Smith, co-author, also from the CfA, said in a press release. "In the future, we can apply this same method to other quasar data to confirm that this long-standing mystery has at last been cracked."

A research paper of the study and results was published in the Astrophysical Journal.