Scientists are seeing signs of lasting immunity to COVID-19, among survivors with even mild infections

Protection against reinfection is not confirmed unless there's proof that people can encounter the virus again and keep it at bay,

To the immune system, not all germs are equally memorable. But our body’s cells seem to be seriously studying up on the coronavirus.

Scientists who have been monitoring immune responses to the virus are now starting to see encouraging signs of strong, lasting immunity, even in people who developed only mild symptoms of COVID-19, a flurry of new studies suggests. Disease-fighting antibodies, as well as immune cells, called B cells and T cells that are capable of recognizing the virus, appear to persist months after infections have resolved — an encouraging echo of the body’s enduring response to other viruses.

“Things are really working as they’re supposed to,” said Deepta Bhattacharya, an immunologist at the University of Arizona and an author on one of the new studies, which has not yet been peer-reviewed.

Although researchers cannot forecast how long these immune responses will last, many experts consider the data a welcome indication that the body’s most studious cells are doing their job — and will have a good chance of fending off the coronavirus, faster and more fervently than before, if exposed to it again.

“This is exactly what you would hope for,” said Marion Pepper, an immunologist at the University of Washington and an author on another of the new studies, which is currently under review at the journal Nature. “All the pieces are there to have a totally protective immune response.”

Protection against reinfection cannot be fully confirmed until there is proof that most people who encounter the virus a second time are actually able to keep it at bay, Pepper said. But the findings could help quell recent concerns over the virus’s ability to dupe the immune system into amnesia, leaving people vulnerable to repeat bouts of disease.

Researchers have yet to find unambiguous evidence that coronavirus reinfections are occurring, especially within the few months that the virus has been rippling through the human population. The prospect of immune memory “helps to explain that,” Pepper said. 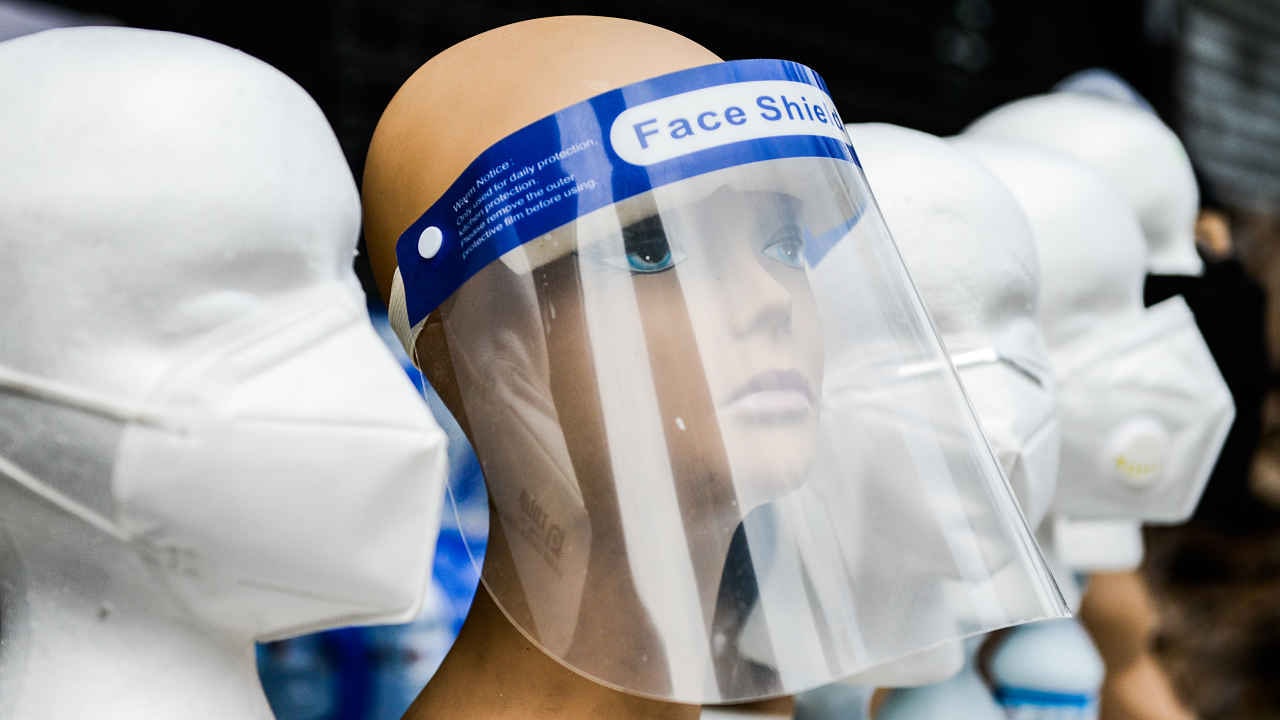 Face shields and masks for sale in New York on March 23, 2020. The clear plastic guards may be easier to wear, disinfect and reuse than cloth or surgical face coverings, although they don’t entirely replace the need for masks. (Marian Carrasquero/The New York Times)

In discussions about immune responses to the coronavirus, much of the conversation has focused on antibodies — Y-shaped proteins that can latch onto the surfaces of pathogens and block them from infecting cells. But antibodies represent just one wing of a complex and coordinated squadron of immune soldiers, each with its own unique modes of attack. Viruses that have already invaded cells, for instance, are cloaked from antibodies but are still vulnerable to killer T cells, which force infected cells to self-destruct. Another set of T cells, nicknamed “helpers,” can coax B cells to mature into antibody-making machines.

(Yet another sector of the immune system assails pathogens within minutes of their arrival while sending out signals called cytokines to mobilize forces from elsewhere in the body. Some evidence suggests that severe cases of COVID-19 may stem from this early process going awry.)

Antibodies also come with an expiration date: Because they are inanimate proteins and not living cells, they can’t replenish themselves, and so disappear from the blood just weeks or months after they are produced. Hoards of antibodies appear shortly after a virus has breached the body’s barriers, then wane as the threat dissipates. Most of the B cells that produce these early antibodies die off as well.

But even when not under siege, the body retains a battalion of longer-lived B cells that can churn out virus-fighting antibodies en masse, should they prove useful again. Some patrol the bloodstream, waiting to be triggered anew; others retreat into the bone marrow, generating small amounts of antibodies that are detectable years, sometimes decades, after an infection is over. Several studies, including those led by Bhattacharya and Pepper, have found antibodies capable of incapacitating the coronavirus lingering at low levels in the blood months after people have recovered from COVID-19.

“The antibodies decline, but they settle in what looks like a stable nadir,” which is observable about three months after symptoms start, Bhattacharya said. “The response looks perfectly durable.”

Seeing antibodies this long after infection is a strong indication that B cells are still chugging away in the bone marrow, Pepper said. She and her team were also able to pluck B cells that recognize the coronavirus from the blood of people who have recovered from mild cases of COVID-19 and grow them in the lab.

Multiple studies, including one published Friday in the journal Cell, have also managed to isolate coronavirus-attacking T cells from the blood of recovered individuals — long after symptoms have disappeared. When provoked with bits of the coronavirus in the lab, these T cells pumped out virus-fighting signals, and cloned themselves into fresh armies ready to confront a familiar foe. Some reports have noted that analyses of T cells could give researchers a glimpse into the immune response to the coronavirus, even in patients whose antibody levels have declined to a point where they are difficult to detect.

“This is very promising,” said Smita Iyer, an immunologist at the University of California, Davis, who is studying immune responses to the coronavirus in rhesus macaques but was not involved in the new studies. “This calls for some optimism about herd immunity, and potentially a vaccine.”

Notably, several of the new studies are finding these powerful responses in people who did not develop severe cases of COVID-19, Iyer added. Some researchers have worried that infections that take a smaller toll on the body are less memorable to the immune system’s studious cells, which may prefer to invest their resources in more serious assaults. In some cases, the body could even jettison the viruses so quickly that it fails to catalog them. “This paper suggests this is not true,” Iyer said. “You can still get durable immunity without suffering the consequences of infection.” A resident wears a mask to curb the spread of the coronavirus, while browsing meat products at a Beijing supermarket on 15 June 2020. The capital is bracing for a resurgence of the coronavirus after more than 100 new cases were reported in recent days in the city, which hadn’t seen a case of local transmission in more than a month. Image: AP

What has been observed in people who fought off mild cases of COVID-19 might not hold true for hospitalized patients, whose bodies struggle to marshal a balanced immune response to the virus, or those who were infected but had no symptoms at all. Research groups around the world are continuing to study the entire range of responses. But “the vast majority of the cases are these mild infections,” said Jason Netland, an immunologist at the University of Washington and an author on the paper under review at Nature. “If those people are going to be protected, that’s still good.”

This new spate of studies could also further assuage fears about how and when the pandemic will end. On Friday, updated guidance released by the Centers for Disease Control and Prevention was misinterpreted by several news reports that suggested immunity against the coronavirus might last only a few months. Experts quickly responded, noting the dangers of propagating such statements and pointing to the wealth of evidence that people who previously had the virus are probably at least partly protected from reinfection for at least three months, if not much longer.

Some illnesses, like the flu, can plague populations repeatedly. But that is at least partly attributable to the high mutation rates of influenza viruses, which can quickly make the pathogens unrecognizable to the immune system. Coronaviruses, in contrast, tend to change their appearance less readily from year to year.

Still, much remains unknown. Although these studies hint at the potential for protectiveness, they do not demonstrate protection in action, said Cheong-Hee Chang, an immunologist at the University of Michigan who was not involved in the new studies. “It’s hard to predict what’s going to happen,” Chang said. “Humans are so heterogeneous. There are so many factors coming into play.”

Research in animals could help fill a few gaps. Small studies have shown that one bout of the coronavirus seems to protect rhesus macaques from contracting it again.

But tracking long-term human responses will take time, Pepper said. Good immune memory, she added, requires molecules and cells to be abundant, effective and durable — and scientists cannot yet say that all three conditions have been definitively met.

As people’s bodies settle into their post-coronavirus state, “we’re just now hitting the point of relevance” to take the long view on immunity, Bhattacharya said. Things may change a few months or years down the line. Or they may not.

“There’s no shortcuts here,” Bhattacharya said. “We just have to follow it out.”