As many as 121 species of plants thrive in Bengaluru’s sacred sites, contributing to the city’s urban biodiversity.

Often a pit-stop for tired travellers or an informal gathering place, these culturally-important open-air tree shrines or ‘kattes’ and temples, with their assemblage of native tree species, offer immense scope to enhance the green infrastructure within rapidly growing megacities, suggests a study.

Offering a glimpse into the city’s native trees, the study documents 121 such species thriving in 69 sacred sites in Bengaluru, spreading across 36 temples and 33 kattes, a sizeable amount for small green spaces that are no strangers to the march of urbanisation. The study covered that covered 69 sacred sites in Bengaluru, spreading across 36 temples and 33 kattes, suggests that such spaces could enhance the green infrastructure in megacities. Image credit; Steevez Rodriguez/PEP Collective.

Overall, 69 percent of the species documented are native, indicating how cultural traditions have helped communities cling on to these heritage trees and plants.

“The prevalence of native species at our study sites can be explained by their cultural significance as sacred species,” said study author Divya Gopal of the Department of Ecology, Technische Universitat Berlin, Germany. For example, neem and peepal have deep socio-cultural connections and are entrenched in local folklore.

As recorded in the study, culturally significant species such as those with religious associations, medicinal uses and ornamental value (often with overlaps), collectively account for 89 percent of all species documented in the sacred sites. 121 species of plants were documented from 69 sacred sites including temples and kattes, contributing to the city’s biodiversity. Image credit: Steevez Rodriguez/PEP Collective.

The dominance of species with religious, medicinal and ornamental values in these unconventional green spaces is linked to the cultural ecosystem services provided by these sites. Associated spiritual and religious values could prompt community support and the willingness to participate as seen in non-urban sacred sites, researchers said.

Urban ecologist Harini Nagendra, who was not associated with the study, stressed how critical it is to protect these green patches.

“In Indian cities, trees are fast disappearing from public spaces. Sacred sites and the keystone Ficus trees they contain are very important in providing shelter and breeding and feeding habitat for a variety of urban wildlife, and in providing stepping stones that help connect the few remaining large urban green spaces, so that species can move between them,” Nagendra said. 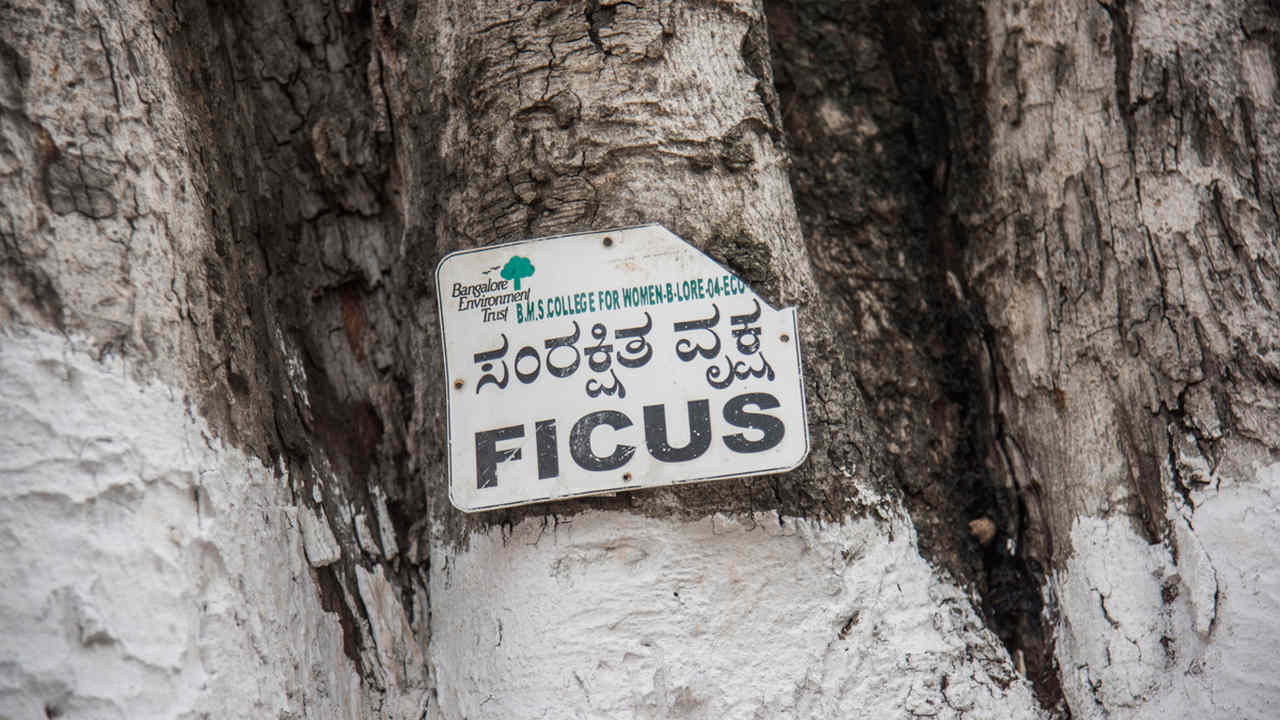 Nagendra said they are also sites of long-lived species and maintain continuity over time because of sacred practices of conservation – when one tree falls, it is replaced by planting of the same species. This makes them especially critical in Indian cities where trees are often felled and “compensatory” planting takes place in distant locations, leaving the wildlife that depended on these trees in specific locations especially vulnerable.

The green mix in kattes, temples and parks

When compared to parks, sacred sites had a higher tree density and tree species richness that could be due to design and cultural preferences.

“Parks are designed to include both wooded areas as well as lawns. While lawns are often not a part of the landscape element of sacred sites. This could be one of the reasons for the higher tree density. Also, there is a general preference to grow certain sacred trees (such as neem, peepal, banyan, paarijata, tamarind, coconut) within sacred sites,” explained Gopal. Though the plant biodiversity at sacred sites have been safeguarded by cultural practices, they and increasingly vulnerable to infrastructure projects in the megacity. Image credit: Steevez Rodriguez/PEP Collective.

Further, temple spaces harbour a greater diversity of non-native species than kattes. “This is because temples are more intensely managed than kattes. Temples are more formal establishments often with a gardener or a caretaker. Kattes are informal. Gardening practices such as growing ornamental plants were noticed in temples as opposed to kattes,” explained Gopal.

Spontaneous and cultivated species had a nearly equal presence in sacred sites. Underscoring the potential of urban sacred sites for spontaneous regeneration of plant species, Gopal said, the process is important for ecological restoration and recovery of urban ecosystems that go through a lot of stress from urbanisation and development. It helps in developing the natural vegetation and biodiversity of the region.

Despite the constant transformation of green spaces such as parks, open areas, avenue trees and lakes into different landforms in Bengaluru there is a core element of continuity in sacred sites in terms of their appearance and usage.

This structural constancy across the city (either as temples or as kattes), along with the cultural and religious significance of these sites, could explain the lack of influence of housing density and age of urban development on the diversity of trees in urban sacred sites. 121 species of plants were documented from 69 sacred sites including temples and kattes, contributing to the city’s biodiversity. Image credit: Steevez Rodriguez/PEP Collective.

As many as 23 sacred sites are located in old neighbourhoods, 24 in intermediate and 22 in new ones, the study reports.

“There is an assortment of species in sites in the new areas of Bengaluru compared to other parts of the city. Sacred sites located within low-density housing areas had more individuals (higher abundance) of cultivated species than sites embedded in more dense quarters of the city,” said Gopal.

Nagendra batted for heritage mapping of the sacred spaces in the city, followed by according them specific protected status as heritage trees.

In the absence of mapping, Nagendra said, they may slip through the cracks. They are “especially vulnerable” to city developmental activities, such as road widening, construction of transformers among others.

“I have seen a number of these trees disappear – not because residents cut them down (they protect them) but because civic authorities do. They need to be mapped and protected by the city as part of its cultural and biodiversity heritage,” Nagendra said. 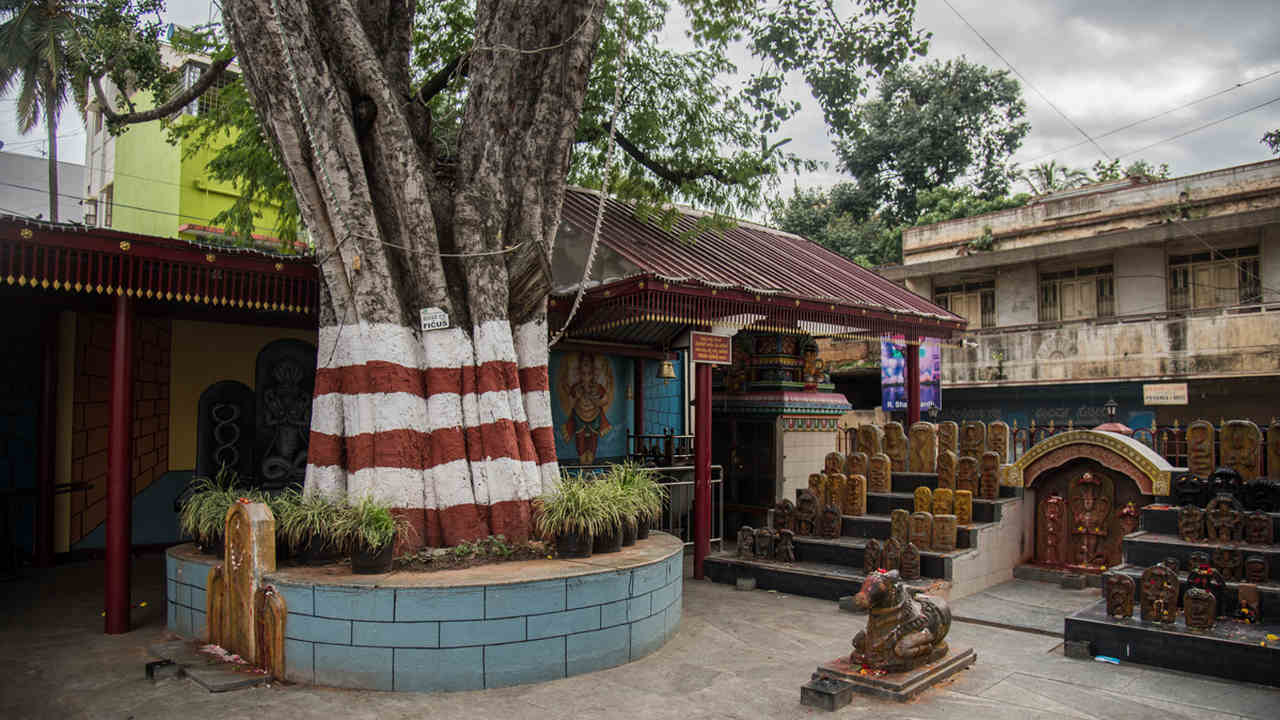 Conservationists advocate heritage mapping of the sacred spaces in the city in order to protect the urban biodiversity. Image credit: Steevez Rodriguez/PEP Collective.

In one such effort-a collective endeavour of about 50 students, volunteers and research associates- 80 ashwath (peepal) kattes have been documented by the Everyday City Lab, a Bengaluru-based urban design and research collaborative.

“Our long-term objective is to explore how this understanding could influence public policy and if we could alter the thinking about how our cities might be planned, not so much as a geometric exercise anymore but more through a people-centric approach,” Kiran Keswani, architect and urban designer and co-founder of the lab, told Mongabay-India.

This mapping activity is an offshoot of a detailed study where Keswani and colleagues would like to show that the history of interactions between people who come to the katte helps them strengthen their social capital over time and that collective memory arises out of social capital accruing over generations.

“Therefore, the more the collective memory a katte holds, the more difficult it is for the government to deterritorialise it or even for a private developer to dislodge the tree-based community space from the urban fabric,” added Keswani.