The researchers have set up a company called Vertex to commercialize the process and they want to develop a working plant.

Researchers have come up with a new system to remove carbon-dioxide efficiently from the air and this can prove as a significant tool in the battle against climate change. The new system can work on the gas at virtually any concentration level, even down to the roughly 400 parts per million currently found in the atmosphere.

The technique, based on passing air through a stack of charged electrochemical plates, is described in a newspaper in the journal Energy and Environmental Science, by MIT post doc Sahag Voskian, who developed the work during his Ph.D., and T. Alan Hatton, the Ralph Landau Professor of Chemical Engineering. The device is essentially a large, specialised battery that absorbs carbon dioxide from the air (or another gas stream) passing over its electrodes as it is being charged up, and then releases the gas as it is being discharged. In operation, the device would simply alternate between charging and discharging, with fresh air or feed gas being blown through the system during the charging cycle, and then the pure, concentrated carbon dioxide being blown out during the discharging.

As the battery charges, an electrochemical reaction takes place at the surface of each of a stack of electrodes. These are coated with a compound called polyanthraquinone, which is composited with carbon nanotubes. The electrodes have a natural affinity for carbon dioxide and readily react with its molecules in the airstream or feed gas, even when it is present at very low concentrations. The reverse reaction takes place when the battery is discharged — during which the device can provide part of the power needed for the whole system — and in the process ejects a stream of pure carbon dioxide. The whole system operates at room temperature and normal air pressure.

"The greatest advantage of this technology over most other carbon capture or carbon-absorbing technologies is the binary nature of the adsorbent's affinity to carbon dioxide," explains Voskian. In other words, the electrode material, by its nature, "has either a high affinity or no affinity whatsoever," depending on the battery's state of charging or discharging. Other reactions used for carbon capture require intermediate chemical processing steps or the input of significant energy such as heat, or pressure differences. 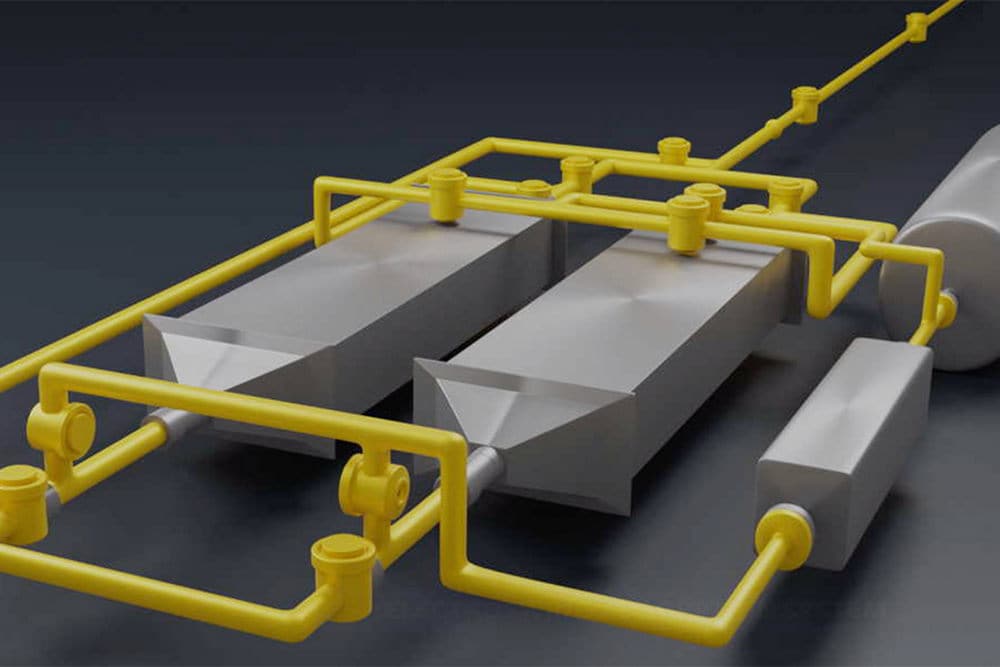 In this new system, air entering from top right passes to one of two chambers (the gray rectangular structures) containing battery electrodes that attract the carbon dioxide. Then the airflow is switched to the other chamber, while the accumulated carbon dioxide in the first chamber is flushed into a separate storage tank (at right). These alternating flows allow for continuous operation of the two-step process. Image credit: MIT

"This binary affinity capture of carbon dioxide from any concentration, including 400 parts per million, and allows its release into any carrier stream, including 100 per cent CO2," Voskian says. That is, as any gas flows through the stack of these flat electrochemical cells, during the release step the captured carbon dioxide will be carried along with it. For example, if the desired end-product is pure carbon dioxide to be used in the carbonation of beverages, then a stream of the pure gas can be blown through the plates. The captured gas is then released from the plates and joins the stream.

In some soft-drink bottling plants, fossil fuel is burned to generate the carbon dioxide needed to give the drinks their fizz. Similarly, some farmers burn natural gas to produce carbon dioxide to feed their plants in greenhouses. The new system could eliminate that need for fossil fuels in these applications and in the process actually be taking the greenhouse gas right out of the air, Voskian says. Alternatively, the pure carbon dioxide stream could be compressed and injected underground for long-term disposal, or even made into fuel through a series of chemical and electrochemical processes.

The process this system uses for capturing and releasing carbon dioxide "is revolutionary" he says. "All of this is at ambient conditions — there's no need for thermal, pressure, or chemical input. It's just these very thin sheets, with both surfaces active, that can be stacked in a box and connected to a source of electricity."

"In my laboratories, we have been striving to develop new technologies to tackle a range of environmental issues that avoid the need for thermal energy sources, changes in system pressure, or addition of chemicals to complete the separation and release cycles," Hatton says. "This carbon dioxide capture technology is a clear demonstration of the power of electrochemical approaches that require only small swings in voltage to drive the separations." 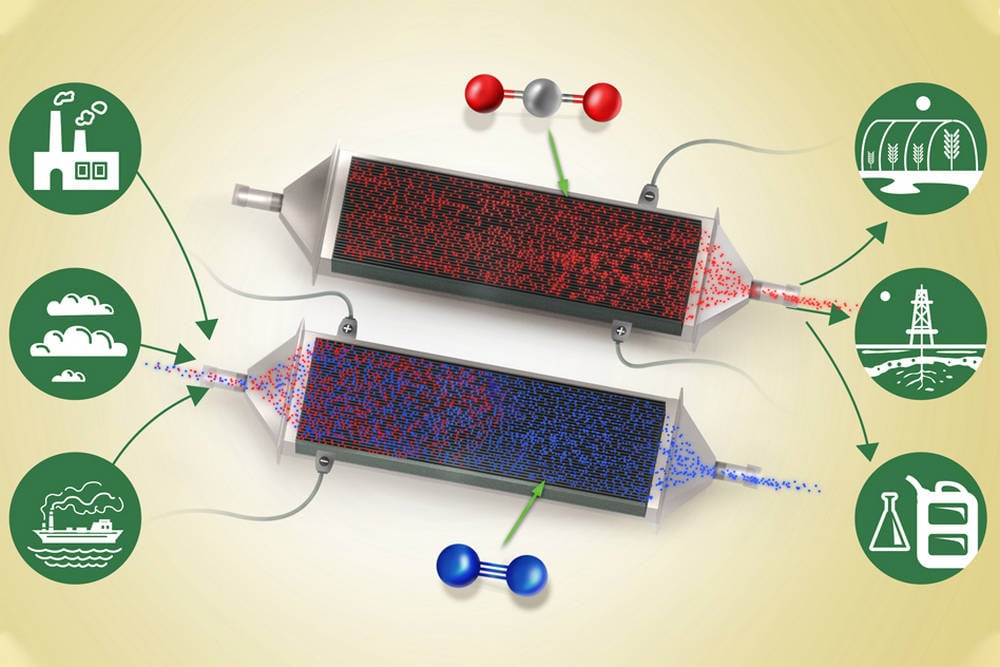 A flow of air or flue gas (blue) containing carbon dioxide (red) enters the system from the left. As it passes between the thin battery electrode plates, carbon dioxide attaches to the charged plates while the cleaned airstream passes on through and exits at right. Image credit: MIT

In a working plant — for example, in a power plant where exhaust gas is being produced continuously — two sets of such stacks of the electrochemical cells could be set up side by side to operate in parallel, with flue gas being directed first at one set for carbon capture, then diverted to the second set while the first set goes into its discharge cycle. By alternating back and forth, the system could always be both capturing and discharging the gas. In the lab, the team has proven the system can withstand at least 7,000 charging-discharging cycles, with a 30 percent loss in efficiency over that time. The researchers estimate that they can readily improve that to 20,000 to 50,000 cycles.

The electrodes themselves can be manufactured by standard chemical processing methods. While today this is done in a laboratory setting, it can be adapted so that ultimately they could be made in large quantities through a roll-to-roll manufacturing process similar to a newspaper printing press, Voskian says. "We have developed very cost-effective techniques," he says, estimating that it could be produced for something like tens of dollars per square meter of the electrode.

Compared to other existing carbon capture technologies, this system is quite energy-efficient, using about one gigajoule of energy per ton of carbon dioxide captured, consistently. Other existing methods have energy consumption which varies between 1 to 10 gigajoules per ton, depending on the inlet carbon dioxide concentration, Voskian says.

The researchers have set up a company called Verdox to commercialize the process, and hope to develop a pilot-scale plant within the next few years, he says. And the system is very easy to scale up, he says: "If you want more capacity, you just need to make more electrodes."