Researchers had encountered the 20-foot shark on 15 January near a dead sperm whale off Oahu.

Two shark researchers who came face to face with what could be one of the largest great whites ever recorded are using their encounter as an opportunity to push for legislation that would protect sharks in Hawaii.

Ocean Ramsey, a shark researcher and conservationist, told The Associated Press that she encountered the 20-foot (6-meter) shark on 15 January near a dead sperm whale off Oahu. 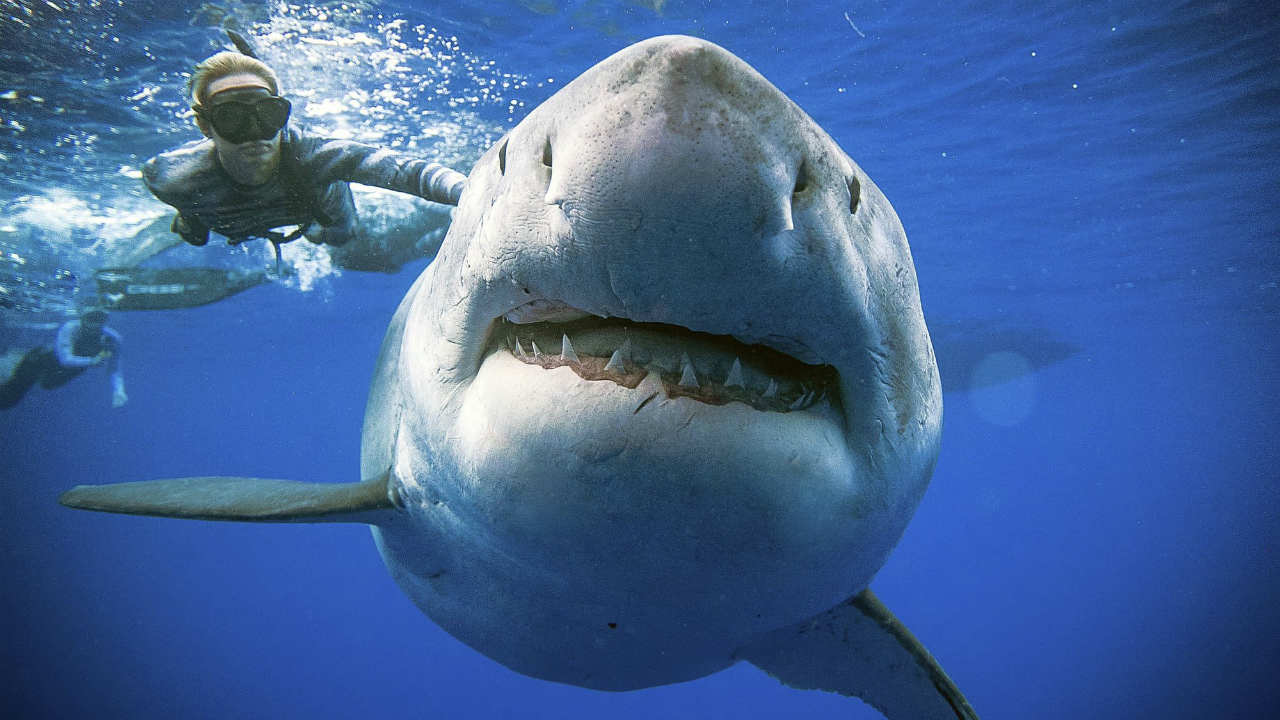 Ocean Ramsey, a shark researcher and advocate, swims with a large great white shark off the shore of Oahu. Image: AP

The event was documented and shared on social media by her fiancé and business partner Juan Oliphant.

The Hawaii Department of Land and Natural Resources said it was aware of photos of the great white and that tiger sharks also have been feeding on the whale.

Oliphant, who photographed the now-viral images, said it’s unclear if the shark is the famed Deep Blue, believed to be the largest great white ever recorded.

“She looks the part right now,” Oliphant said about the shark spotted on 15 January. “Maybe even more exciting that there is another massive, you know, super-size great white shark out there. Because their populations are so dwindling.”

Ramsey, who operates Oahu-based One Ocean Diving and Research with Oliphant, said she has been pushing for several years for a bill that would ban the killing of sharks and rays in Hawaii, and hopes this year the measure will become law.

She said the images of her swimming next to a huge great white shark prove the predators should be protected, not feared.

Still, the veteran shark diver doesn’t think the general public should recklessly get into the water with the giants, especially around a food source like a rotting whale carcass. 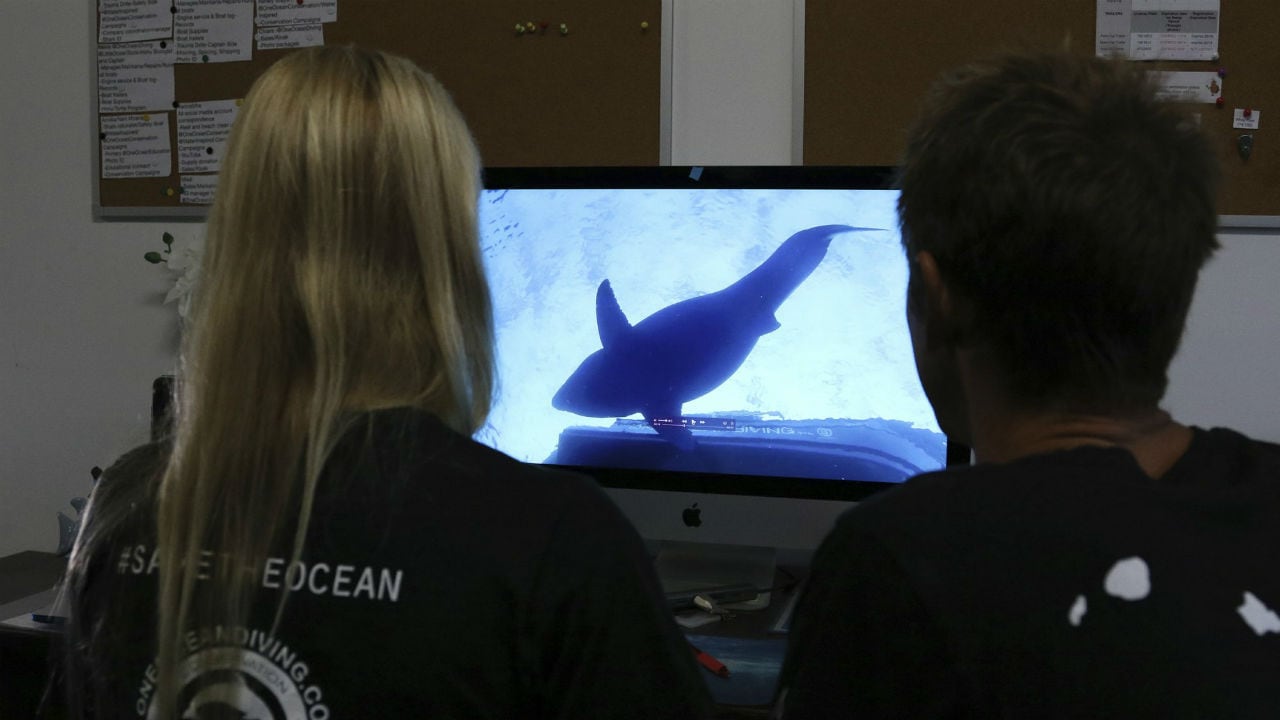 Juan Oliphant, right, and Ocean Ramsey, co-founders of One Ocean Diving and Research, look at footage their encounter with a great white shark. Image: AP

Ramsey said extensive training and time spent studying shark behavior has kept her team and customers safe. She teaches people about how to act and, more importantly, not act when they encounter a shark in the water.

Ramsey and her team observe behavior, identify and tag sharks and share that data with researchers as well as state and federal officials. She said she previously swam with the huge shark on research trips to Guadalupe Island, Mexico.

Unlike many marine mammals, sharks are not a federally protected species, though there are laws against the sale of their fins.

“There’s not a lot of sympathy for sharks because of the way they’re portrayed in media and they don’t have the cute cuddly appearance,” Ramsey said. “You can’t hate them for being predators. We need them for healthy marine ecosystems.”

Ramsey and Oliphant want to make sure that people realize that shark bites are uncommon.

“The idea that they see people as a food source, that is rubbish and that needs to go away because really that’s ultimately leading to the demise of these animals,” Oliphant said.

State Senator Mike Gabbard sponsored the shark protection legislation last session and plans to reintroduce it this year. The bill died in the House when it wasn’t heard by the House Judiciary Committee. Ocean Ramsey, a shark researcher and advocate, swims with a large great white shark off the shore of Oahu. Image: AP

The Hawaii Department of Land and Natural Resources said the decomposing whale carcass had drifted to about eight miles (13 kilometers) south of Pearl Harbor after being towed 15 miles (24 kilometers) offshore days earlier.

Officials say there have been reports that people are climbing onto the carcass to take its teeth as souvenirs, which may be a violation of state and federal laws.

The agency’s Division of Conservation and Resources Enforcement Chief Jason Redull said people should stay out of the water around the dead whale.

“Understandably, some people want to get into the water either out of fascination or to get photographs, but it is truly dangerous to be around this carcass with so much shark activity,” he said.

Ramsey said it’s impressive that the great white has survived a “gauntlet of human death traps.”

“I don’t know how old she is,” Ramsey said. “But for her to survive through so many longline fisheries and,. you know, gill nets and team nets and fishermen who might just kill her because they think that she is a monster ... it’s very special.”

Not Godzilla, not kraken. So, what ate this massive white shark?

Sharks can heal themselves, resist mutations in their genes thanks to evolution