The lengths of the molecular bonds between einsteinium and eight neighbouring atoms was also calculated for the first time.

Einsteinium is an element with a famous name that almost no one has heard of. With 99 protons and 99 electrons, it sits in obscurity near the bottom of the periodic table of chemical elements, between californium and fermium. It first showed up in the explosive debris of the first hydrogen bomb in 1952, and the team of scientists who discovered it gave it a name to honor Albert Einstein. Even today, scientists know little about it. Einsteinium is highly radioactive. Because there are no stable versions that do not fall apart within a few years, it is not found in nature. It can be produced in a few specialized nuclear reactors, but only in minute amounts.

Writing in the journal Nature, researchers led by Rebecca J Abergel, who leads the heavy element chemistry group at Lawrence Berkeley National Laboratory in California, reported Wednesday that they have now worked out some basic chemical properties of einsteinium. It was not easy. Indeed, Abergel described her paper as the culmination of “a long series of unfortunate events.”

David L Clark, a scientist at the Los Alamos National Laboratory who was not involved with the research, said the end result was a “tour de force” and part of a renaissance in the study of these heavy elements, which have very different properties than lighter, more common elements and could be used in novel nuclear reactors or cancer therapies.

“This kind of work hasn’t been done before,” Clark said. “It’s state of the art.”

It took a while to get started.

A few years ago, Abergel missed out on a chance to obtain some einsteinium that was produced at Oak Ridge National Laboratory in Tennessee — a federal research center that was central to the production of the uranium used in the first atomic bombs — because she had not raised money for research in time. She was ready for the next einsteinium production campaign in 2019.

After she and her colleagues designed the experiments and safety procedures for handling the radioactive element, Oak Ridge told them that there would not be any einsteinium after all. But about a week later, Oak Ridge then said it could provide some einsteinium. “All of a sudden, it’s like, ‘Oh, it’s coming,’” Abergel recalled. “But you only get one-third of what you thought.” 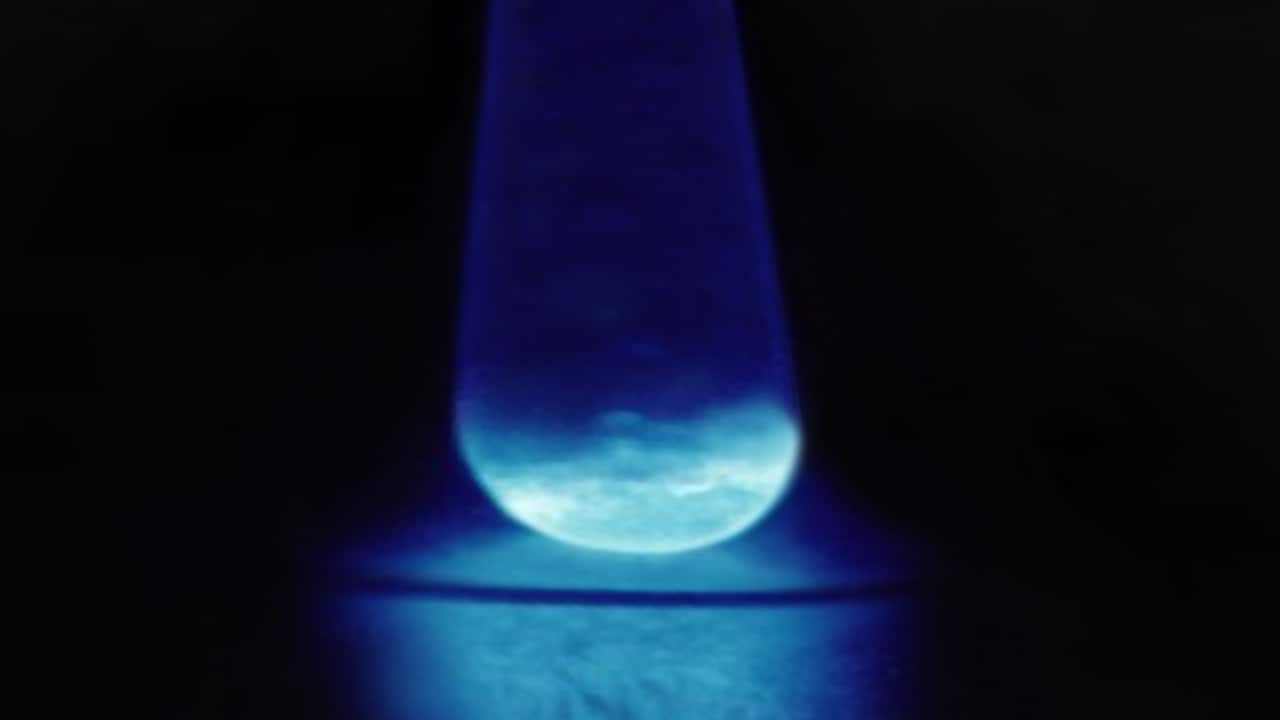 A vial with 300 micrograms of einsteinium-253, which has a half-life of 20 days. Image Credit: US Department of Energy

Worse, the sample that the Berkeley researchers received was heavily contaminated with einsteinium’s periodic table neighbor, californium. That thwarted their initial plans, to stack the einsteinium atoms into a crystal and then illuminate the element’s chemical properties by bombarding it with X-rays before examining the pattern of rays bouncing off.

Instead, they turned to a large molecular structure that essentially worked as a claw to hold an atom of einsteinium, bonding it in eight places. But to study this structure, they needed to use a different research center, at the SLAC National Accelerator Laboratory on the other side of San Francisco Bay. During one of the early preparations, a sample was too acidic, causing a container to fail.

Even though no radiation leaked out, Abergel said, “because we have so many safety protocols — and rightfully so — we were told we had to re-evaluate everything, reassess our techniques.”

Los Alamos National Laboratory, the birthplace of atomic bombs, designed a new container for the Berkeley team. That took a few months, and finally, Abergel and her colleagues were able to conduct their experiments.

They were investigating an isotope of einsteinium that has 155 neutrons in addition to the 99 protons in its nucleus. That is the second longest-lived version of einsteinium, with a half-life of 276 days. With each delay, they had less einsteinium left to study. About 7% of the einsteinium atoms disappeared each month.

Then, with the coronavirus pandemic, all of the laboratories — including those needed to study other aspects of the einsteinium — shut down. When they resumed work, most of the sample was gone. But there was still enough to finish most of the research.

From the experiments at SLAC, they measured the lengths of the molecular bonds between the einsteinium and the eight atoms in the molecular claw holding it. The length turned out to be 2.38 angstroms. (One angstrom is one hundred-millionth of a centimeter.)

They were expecting 2.42 or 2.43 angstroms, said Korey P. Carter, a professor of chemistry at the University of Iowa and another author of the Nature paper. “A statistically significant difference,” he said.

The emission of light by the einsteinium also unexpectedly shifted to a shorter wavelength when it was bound in the molecular claw. The researchers had expected the wavelength to become longer.

Abergel said the differences indicated that the electrons were moving differently than had been thought.

That is not surprising. With 99 electrons whizzing around an einsteinium nucleus, it is hard to come up with a model that accurately describes what is going on. Unlike in lighter elements, the large positive charge in einsteinium and other heavy elements causes electrons to travel at speeds that reach a sizable fraction of the speed of light. That means the effects from Einstein’s theory of special relativity also have to be taken into account.

“The electrons are moving so fast that chemistry changes, because chemistry is all about the behavior of electrons,” said Thomas Albrecht-Schönzart, a professor of chemistry at Florida State University who was not involved with the research. “Almost by definition, you’re going to get strange properties.”

That question will be studied for quite a while.

“The problem is, those calculations are super hard,” Albrecht-Schönzart said.

Einsteinium itself is unlikely to find any practical use anytime soon. But other heavy elements could, like actinium, which is a bit lighter with 89 protons and 89 electrons. And what scientists learn about einsteinium could also offer even more insights on those elements. “The similarity in this part of the periodic table teaches us principles of structure and bonding,” said Clark, the scientist at the Los Alamos National Laboratory.

Actinium is already being tested as a cancer treatment. Because the chemistry of heavy elements is not well-understood, it is harder to design molecules containing them.

“But if we can understand and master that chemistry at that level of chemical bond- making, then we can go after things like cancer treatment,” Clark said.