After villagers sold their otherwise unproductive private lands to miners, common pasturelands were next in line.

by Vaishnavi Rathore and Deborupa Ghosh

Since the first week of September, Pur, a town in Bhilwara district of Rajasthan has been on an indefinite protest. One of their banners says, “Shut Jindal Company, provide relief to the public of Pur.” The sign refers to the Jindal Saw Ltd. that has been in the limelight since 2015 with accusations of illegal iron ore mining, taking over common pasture land, and polluting public water. The ongoing protest is specifically for the 4500 houses in the vicinity that have developed cracks due to blasting done by the company. “The situation is such there, that we do not get our girls married to families in Pur,” says Chatur Singh, who resides close to Dhwala, a village about 90 km from Pur. Dhwala and Rooppura, villages about 40 km apart also in Bhilwara district, have also fought a similar battle recently. However, their conflict was against a different mineral.

Running along the narrow roads that connect villages within the district, the Aravalli ranges peep in and out. Expanding over 600 kilometres across north-western India, these ranges are composed of rich minerals. In Bhilwara, they pop up rich with granite—the mineral responsible for conflict in Rooppura and Dhwala. Where under the surface granite exists, over the surface vegetation, albeit scanty, is available as pastureland.

The two villages of Rooppura and Dhwala have many such pasturelands adjoining their villages where small herds of goats feed on desi babul, a local acacia variety. “Our survival is dependent on the charagah (common pastureland),” says Bhag Chand Gujjar. “Where else would we take our cows, buffaloes and goats to graze?” Bhag Chand is a resident of Rooppura, and also a member of a dairy cooperative, like many others from the village. Most of the population here depends on the cultivation of cotton, jowar (sorghum), groundnuts, or upon livestock rearing.

Valuing the resources available in their villages, residents of both villages had collectively organised themselves into institutions almost a decade back to conserve and protect the resources. At Rooppura, the Devnarayan Samiti, with assistance from non-profit organisation Foundation for Ecological Security (FES), has been restoring revenue wastelands from 2008 onwards, while at Dhwala, similar processes under the banner of Charagah Vikas Samiti Mahorpura began in 2006. Both samitis (committees) then come under the umbrella of a “Federation” which refers to a collective of neighbouring samitis.

“Though FES provided the initial awareness to us, we went on to create our own rules and regulations on managing these restored common lands through the Samiti,” says Pramod Singh, an English teacher at a government school in Dhwala.  “We assigned fines to be paid if a branch was cut from the charagah (common pastureland), a higher fine in case of a tree being cut. But most importantly, we would ensure that the Samiti would meet every amavasya (the night of new moon) to discuss matters.” 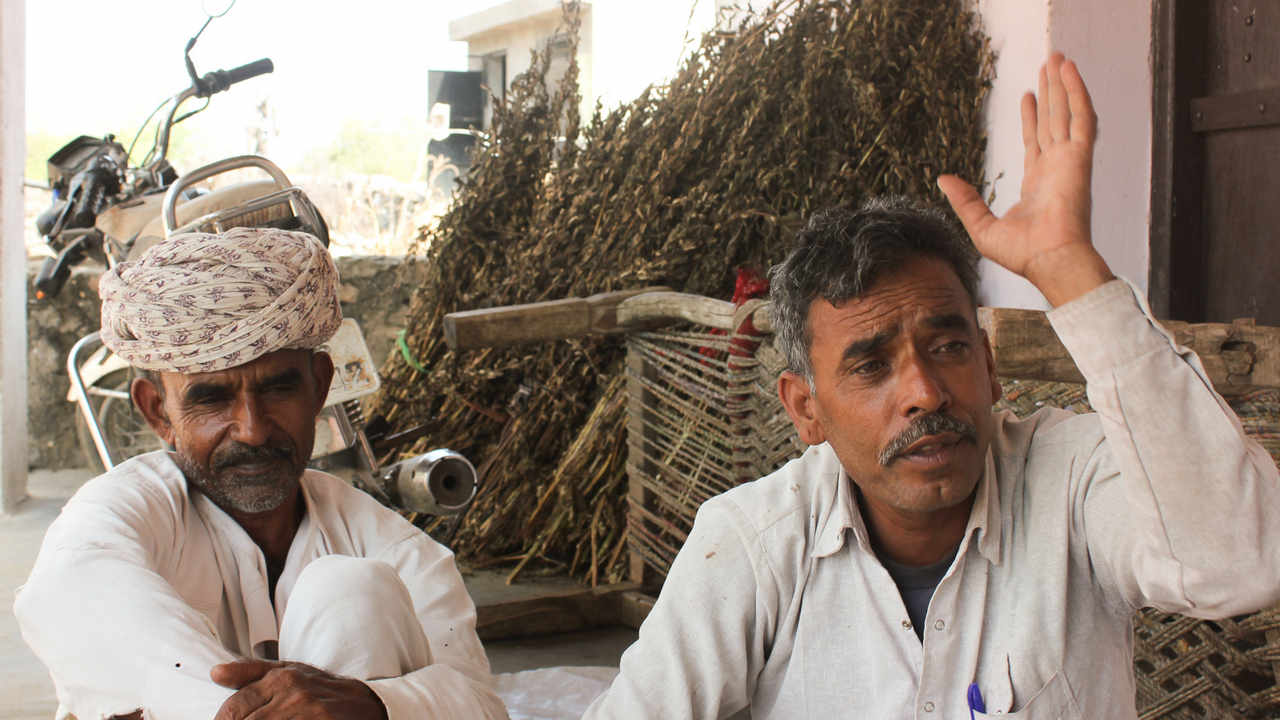 Farmers Dau Ram (l) and Ladhu Ram (r) with a harvest of ‘til’ (sesame) behind them. image credit: Vaishnavi Rathore.

In 2011, residents of Dhwala, following conversations with the Federation took a significant step—passing of a resolution in the Gram Sabha which decided against allotment of revenue wastelands to individuals.

Today, the efforts of villagers through the samiti have resulted in re-vegetation and creation of check dams, contour trenches on shamlat (common lands) around the villages. “Earlier, if you looked at the charagah from the roads, you would be able to see till the end of it, but today, dense vegetation of Babul trees stands tall,” says resident Promod Singh.

Continuing their efforts, in 2017, the Devnarayan Samiti of Rooppura, decided to convert about 64 bighas (approx 26 acres) of revenue wasteland to pasturelands. But, they were in for a rude shock— that land was allotted for mining. A few kilometres away in Dhwala, around the same time, a few villagers were grazing their cattle, when they observed people from the city arriving to do a basic survey and photograph of the land. On gaining more information they found out that their grazing land too, was at the threat of being mined.

But mining activity was not something new to the people here. Granite, which is categorised as a minor mineral had attracted attention since around 2010 in the area. Villagers whose land had been agriculturally unproductive due to granite below, saw this as opportunity to earn quick revenue. “On lands where crops not worth even Rs. 20 could grow, people were now selling from Rs 2 lakhs to Rs 30 lakhs per bigha!” says Chatur Singh, who resides close to Dhwala. A 2017 letter addressed to the Prime Minister, on behalf of the Federation, to protect pasturelands. Acquired through Ladulal Singh Gujjar.

Today, Rajasthan’s District Mineral Foundation website boasts of over 15,000 total mining leases, with Bhilwara district alone being a host to 1166 leases. In Rooppura, palatial houses shadow the roads through the village, while luxury cars like a Range Rover and a Mercedes hum across. Two petrol pumps stand ahead. On both sides of the roads, a market of services for repairing and maintenance of machinery and oiling remains busy. A decade ago, this centre had just one grocery store.

After private lands were sold for mining, common lands were next in line. What possibly pushed this was Rajasthan government’s amendment to the ‘Rajasthan Minor Mineral Concession Rules’ in 2017 to encourage mining in the state. This new amendment made it smoother, quicker and easier for mining. The 64 bighas of revenue wasteland at Rooppura was sold for mining the rich granite it was on. Soon after, Dhwala’s common land was up for grabs for the miners.

Soon after, both the villages in coordination with the Federation filed a case at the High Court against this in 2017. “Whoever had sold their private lands earlier, they ran out of all their money,” says Ladhu Singh Gujjar of a neighbouring village. “We see them all regret their decisions, and no way will we let mining be done on our pasture lands.”

In the following years, memorandums were submitted to the District Collector, letters written to the Prime Minister, meetings and dharnas organised. One of the largest meeting organised by the Federation saw more than 80 villages participating to raise a voice against the allotment of commons to private parties.

In Dhwala, the residents learned that their fight was not just with the administration, but also with their own residents. Despite the 2011 gram sabha resolution, the land was allotted to 16 villagers of Dhwala. With consistent discussion, 12 decided to surrender their allotments. The remaining four have been adamant about their decision of keeping the allotted land. Discussions here are still on. As per the environment impact assessment (EIA) notification, 2006, activities such as mining, power generation and other various kinds of industrial projects need to be preceded by certain processes before they are granted permission to begin. This includes assessing potential environmental impacts and conducting a public hearing. Within public consultation, two processes are required: a public hearing at the site or in its close proximity, and obtaining responses in writing from other concerned persons having a plausible stake in the environmental aspects of the project or activity. In this case, the villagers were not made a part of either.

In July this year, the Rajasthan High Court put a stay on any mining activity on the lands in Dhwala and Rooppura.  These lands now lie unoccupied by activity—neither the samitis can initiate their restoration works, nor can the private players begin mining. The cattle however, have a place to graze.

Pramod Singh’s apprehension is genuine. For an area with limited vegetation and a strong dependence on common lands, its destruction will not only put at risk livestock rearing, but also agriculture. “The cotton growers of the region are very worried now,” says Chatur Singh. “Ever since mining has begun in the area, water in their wells are available at a lower level. Where will they get water for agriculture?” 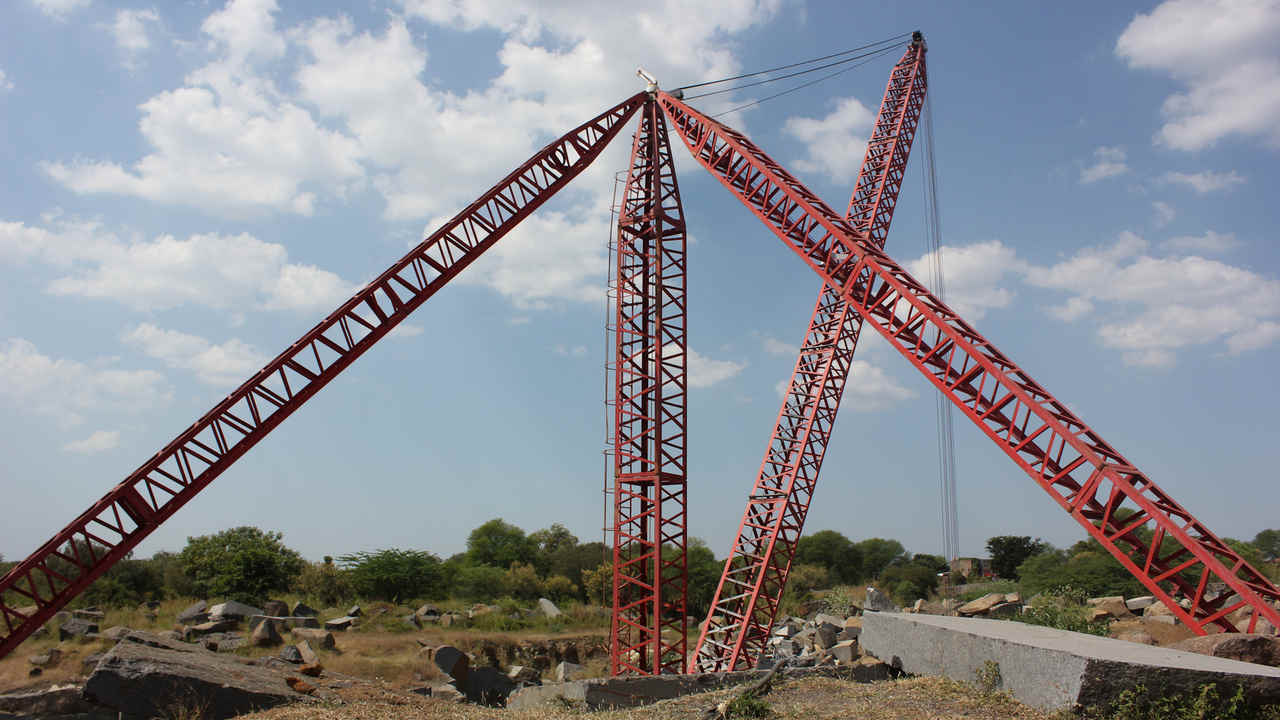 Between August 2015 and August 2016, 53 percent of the groundwater of Bhilwara district has fallen by more than 4 metres, as per data by Rajasthan Groundwater Board. In July this year, 12 Panchayat samitis of the district had been declared as ‘dark zones’ owing to the lack of groundwater. Continued mining will further add pressure to this prized resource.

While health problems have not yet manifested, residents of both villages are certain that illnesses like silicosis and tuberculosis might become a reality in the near future. In fact, the Silicosis Grant Disbursement Portal shows that over 58,000 patients have registered in the state, with Bhilwara alone already having around 5800 patients. If it continues the way it is now, patients from Dhwala and Rooppura could soon join these statistics.

“Most of this granite will get sold outside, but the mining is creating this huge hole in our villages,” says Pramod. While the stay order marks a success of communities’ collective efforts, continued push for unregulated mining would mean depleting groundwater and diminishing commons, hollowing out the villages of their natural resources.

Budget 2023: Agriculture Accelerator Fund will be set up to encourage agri-startups by young entrepreneurs, says FM