Last week, one of the telescope’s main steel cables that was capable of sustaining 544,000 kilograms snapped under only 283,000 kilograms.

The giant, aging cables that support one of the world’s largest single-dish radio telescopes are slowly unravelling in this US territory, pushing an observatory renowned for its key role in astronomical discoveries to the brink of collapse.

The Arecibo Observatory, which is tethered above a sinkhole in Puerto Rico’s lush mountain region, boasts a 1,000-foot-wide (305-meter-wide) dish featured in the Jodie Foster film “Contact” and the James Bond movie “GoldenEye.” The dish and a dome suspended above it have been used to track asteroids headed toward Earth, conduct research that led to a Nobel Prize and helped scientists trying to determine if a planet is habitable. 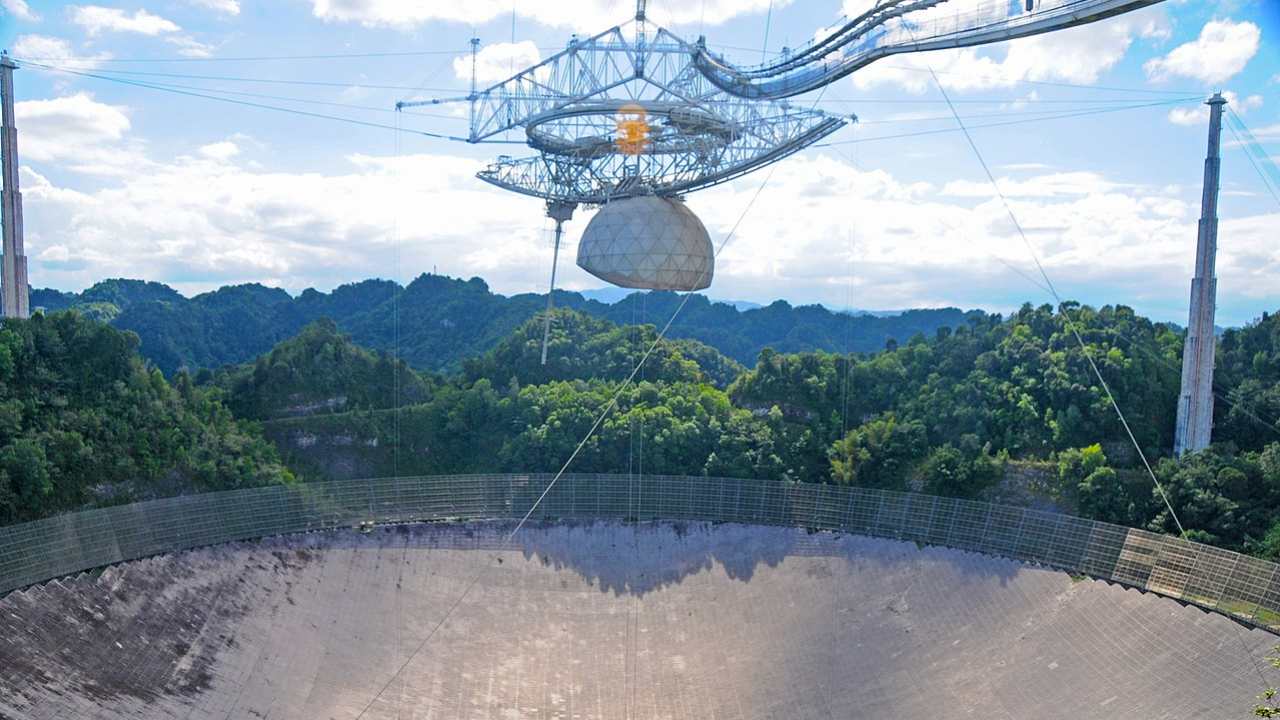 Last week, one of the telescope’s main steel cables that was capable of sustaining 544,000 kilograms snapped under only 283,000 kilograms. Image credit: Wikipedia

“As someone who depends on Arecibo for my science, I’m frightened. It’s a very worrisome situation right now. There’s a possibility of cascading, catastrophic failure,” said astronomer Scott Ransom with the North American Nanohertz Observatory for Gravitational Waves, a collaboration of scientists in the US and Canada.

Last week, one of the telescope’s main steel cables that was capable of sustaining 544,000 kilograms snapped under only 283,000 kilograms. That failure further mangled the reflector dish after an auxiliary cable broke in August, tearing a 100-foot hole and damaging the dome above it.

Officials said they were surprised because they had evaluated the structure in August and believed it could handle the shift in weight based on previous inspections.

It’s a blow for the telescope that more than 250 scientists around the world were using. The facility is also one of Puerto Rico’s main tourist attractions, drawing some 90,000 visitors a year. Research has been suspended since August, including a project aiding scientists in their search for nearby galaxies.

The telescope was built in the 1960s and financed by the Defense Department amid a push to develop anti-ballistic missile defences. It’s endured over a half-century of disasters, including hurricanes and earthquakes. Repairs from Hurricane Maria, which devastated Puerto Rico in 2017, were still underway when the first cable snapped.

Some new cables are scheduled to arrive next month, but officials said funding for repairs has not been worked out with federal agencies. Scientists warn that time is running out. Only a handful of cables now support the 900-ton platform.

“Each of the structure’s remaining cables is now supporting more weight than before, increasing the likelihood of another cable failure, which would likely result in the collapse of the entire structure,” the University of Central Florida, which manages the facility, said in a statement Friday.

University officials say crews have already noticed wire breaks on two of the remaining main cables. They warn that employees and contractors are at risk despite relying heavily on drones and remote cameras to assess the damage.

The observatory estimates the damage at more than $12 million and is seeking money from the National Science Foundation, an independent federal agency that owns the observatory.

Foundation spokesman Rob Margetta said engineering and cost estimates have not been completed and that funding the repairs would likely involve Congress and discussions with stakeholders. He said the agency is reviewing “all recommendations for action at Arecibo.”

“NSF is ultimately responsible for decisions regarding the structure’s safety,” he said in an email. “Our top priority is the safety of anyone at the site.”

Representatives of the university and the observatory said the telescope’s director, Francisco Córdova, was not available for comment. In a Facebook post, the observatory said maintenance was up to date and the most recent external structural evaluation occurred after Hurricane Maria.

The most recent damage was likely the result of the cable degrading over time and carrying extra weight after the auxiliary cable snapped, the university said. In August, the socket holding that cable failed, possibly the result of manufacturing error, the observatory said.

The problems have interrupted the work of researchers like Edgard Rivera-Valentín, a Universities Space Research Association scientist at the Lunar and Planetary Institute in Texas. He had planned to study Mars in September during its close approach to Earth.

“This is the closest Mars was going to be while also being observable from Arecibo until 2067,” he said. “I won’t be around the next time we can get this level of radar data.”

The observatory in Puerto Rico is considered crucial for the study of pulsars, which are the remains of stars that can be used to detect gravitational waves, a phenomenon Albert Einstein predicted in his theory of general relativity. The telescope also is used to search for neutral hydrogen, which can reveal how certain cosmic structures are formed.

He helped discover the first extrasolar and pulsar planets and credited the observatory for having a culture that allowed him to test what he described as wild ideas that sometimes worked.

“Losing it would be a really huge blow to what I think is a very important science,” Wolszczan said.

An astronomer at the observatory in the 1980s and early 1990s, Wolszczan still uses the telescope for certain work because it offers an unmatched combination of high-frequency range and sensitivity that he said allows for a “huge array” of science projects. Among them: observing molecules of life, detecting radio emission of stars and conducting pulsar work.

The telescope also was a training ground for graduate students and widely loved for its educational opportunities, said Carmen Pantoja, an astronomer and professor at the University of Puerto Rico, the island’s largest public university.

She relied on it for her doctoral thesis and recalled staring at it in wonder when she was a young girl.

“I was struck by how big and mysterious it was,” she said. “The future of the telescope depends greatly on what position the National Science Foundation takes ... I hope they can find a way and that there’s goodwill to save it.”