Predicting weather is hard: A brief history of the National Center for Medium-Range Weather Forecasting

NCMWRF, founded in the 20th century, was among the first Indian institutions to acquire a supercomputer, in 1989.

Everybody understands what forecasting the weather means. However, few know that weather is split into short — over one to three days and medium — over three to ten days range forecasting. There's another category of predictions, of climate, that are done for seasons, years or longer.

The gap between 'weather' and ‘climate’ is bridged by so-called extended-range forecasting, that is over two to four weeks. Irrespective at what range the predictions are being made over, they depend on how predictable the weather-climate system is over those particular timescales.

Where do the predictabilities come from? Because the relations between temperature and humidity are exponential, weather can rapidly go in different directions – from dry to wet or heavy rains and from heavy rains to sunny in just a few hours to a day or two. This is especially true for the Tropics, where warm land and oceans can pump massive amounts of moisture into the atmosphere which can condense and produce rain amounts as high as 375 mm in a 24 hour period as was seen over Mumbai on 1 July 2019.

This makes weather forecasting a challenge for countries like India.

A brief history of the NCMRWF

It is the National Center for Medium-Range Weather Forecasting or NCMRWF that carries out weather forecasting as well as all the related weather services for the country. Here is a brief history of how NCMRWF came about.

Meteorological activities in India started as early as 1802 when the East India Company established the first observatory in Madras. Recording of meteorological observations grew continuously in the following decades and by 1875, the India Meteorology Department or the famed IMD was established. It systematised the process of observing and predicting weather and climate with the aim of guiding agricultural activities. Failed monsoons and associated famines in the third quarter of the 19th century and the first quarter of the 20th century underscored the need to modernise India’s agriculture. This led to the establishment of the Imperial Council of Agricultural Research in 1927 which is now the Indian Council of Agricultural Research. IMD initiated an Agricultural Meteorology program as well. IMD runs its own training courses for many decades but mostly focused on empirical weather forecasting and observational methodologies.

Weather prediction efforts in the US and Europe were evolving constantly from the early 20th century but mostly as statistical or empirical forecasts. After the end of World War II, demands from aviation and other sectors and the invention of mainframe computers led to early Numerical Weather Prediction models (NWPs). NWPs are much more accurate than empirical forecasts. India was seeing substantial success in its Green Revolution in the 1960s and 70s but the negative impact of drought on agricultural production was still disheartening. India began to recognise the need for its own NWP in the 1970s. After various expert consultation processes, NCMRWF was officially set up in 1988. 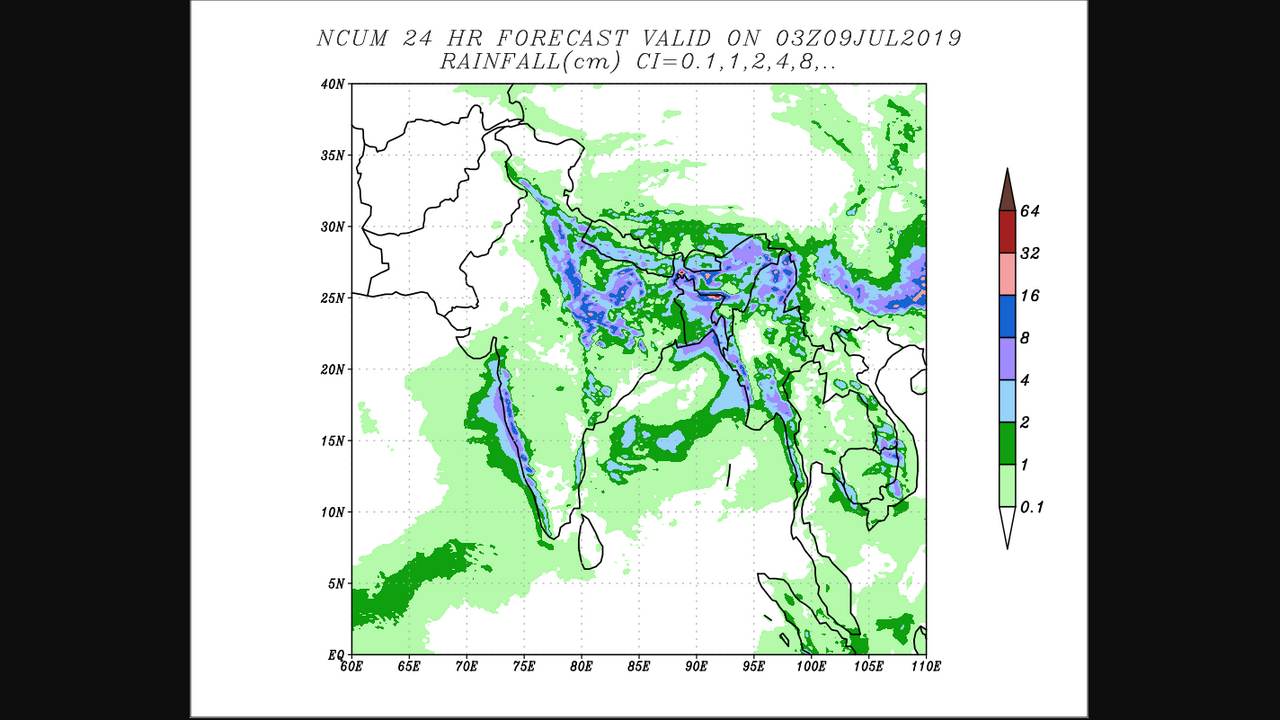 Predictions for rainfall in the next 24 hours. Image credit: NCMRWF

The expert panel called for the establishment of a medium-range forecasting centre, mainly to address the needs of farmer's operations. The already existing network of  Agro-meteorological  Field  Units (AMFUs) made up of clusters of districts based on homogeneous agro-meteorological conditions was designated as the target for prediction efforts. Weather forecasts of three to ten days were the prescribed goal with a recommendation for the acquisition of necessary computers.  Agricultural Advisory  Service  (AAS)  was formulated which would serve AMFUs in collaboration with agronomists from state agricultural universities.

NCMRWF is based in Noida designates itself a Centre of Excellence in Weather and Climate Modelling under the Ministry of Earth  Sciences.  The stated mission is to continuously develop advanced numerical weather prediction systems, with increased reliability and accuracy over India and neighbouring regions through research, development and demonstration of new and novel applications,  maintaining the highest level of knowledge, skills and technical bases.

It has implemented and performed timely upgrades of a global  NWP  system to routinely issue agro advisories to farming communities across the country.  Operational advisories are issued by IMD. NCMRWF  is also responsible for providing customized weather forecasts for various other socio-economic sectors of the country such as energy, health, sports and tourism. NCMWRF acquired its first supercomputer in 1989 but the facilities have been updated several times since. Globally, coupled ocean-atmosphere models acquired from the European Union is employed for issuing sector-specific forecasts at various spatial scales ranging from tens of kilometres to tens of meters. To minimise the intrinsically-chaotic nature of weather forecasts, multiple model integrations are performed to increase the accuracy of the forecasts for rainfall including heavy rain events that caused devastating floods such as the 2018 Kerala floods.

NCMRWF also deserves kudos for the accurate forecasts of cyclone tracks which save lakhs of lives when combined with advisories and organised evacuations. Their activities are performed as four major projects; Numerical Modelling of Weather and Climate (NMWC), Modelling of Changing Water Cycle and Climate (MCWCC), Development of High Impact Severe Weather Forecasting System (DSWFS), BIMSTEC Centre for Weather and Climate (BCWC). NCMWRF continues to handle an ever-increasing volume of data thanks to the deployment of in situ and remote sensing platforms and also continues to increase the resolution of its suite of models to deliver weather forecasts at higher and higher accuracy and spatial scales.

Floods, droughts, extreme events and the vagaries of the monsoon cost India billions of dollars per year. The investments in the computational and human resources NCMRWF save life, property and infrastructure by performing weather predictions day-in-day-out in service of the country.