Forest dept and van panchayats should work together to find solutions to save both- dwellers and birds.

Long-term rural extraction of biomass in oak-dominated Himalayan forests disturbs the forest structure. This, in turn, affects diversity and composition of insect-eating birds and oak forest specialists, which were the most vulnerable to local extinctions, reports a recent study.

Apart from conserving oak forest stands, “the study shows that it is necessary to maintain the historic mosaic of protected forest, managed forests and agriculture, if the entire complement of forest bird fauna at this altitude [1700-2200m] is to be protected,” said Ghazala Shahabuddin, senior author of the study and a scientist at the Dehradun-based not-for-profit organization Centre for Ecology, Development and Research.

“Agriculture has earlier been shown to be an important refuge for high altitude avifauna during their downhill winter migration,” she added. Few studies have investigated the effect of low-intensity biomass extraction of fodder, fuelwood, and medicinal products, said Tarun Menon, lead author of the study. Such removal can disturb the forest structure and impact biodiversity in the long-term, he added.

This is the first study that has quantitatively investigated the effect of non-timber forest extraction on the diversity and abundance of birds in mid-elevation Western Himalayan forests. Such forests are dominated by oak, and are interspersed with agricultural land, pine forests and orchards, making the landscape matrix diverse.

Oak forests in the middle Himalayas consist of state-owned reserved forests, private forests or community/village forests. The governance system of community-managed forests (known as van panchayat forests) in the region is unique to the state of Uttarakhand. They are co-managed by both the government and local village committees, under agreements for sustainable use.

“The reason we chose the mid-elevation of the Himalayas to conduct this study is that this region has significant human population densities that are highly dependent on oak forests for their livelihoods,” said Menon, who conducted this study during his Masters at Bengaluru’s National Centre for Biological Sciences (NCBS). “These same oak forests help maintain the hydrological balance while also being home to a high diversity of endemic and range-restricted bird species.”

“Although this extraction is mostly for local consumption [such as livestock grazing, fuelwood extraction, lopping off branches for fodder, collection of leaf litter for compost], increasing population (both local and tourist) puts increased demand on these forest resources,” added Menon. 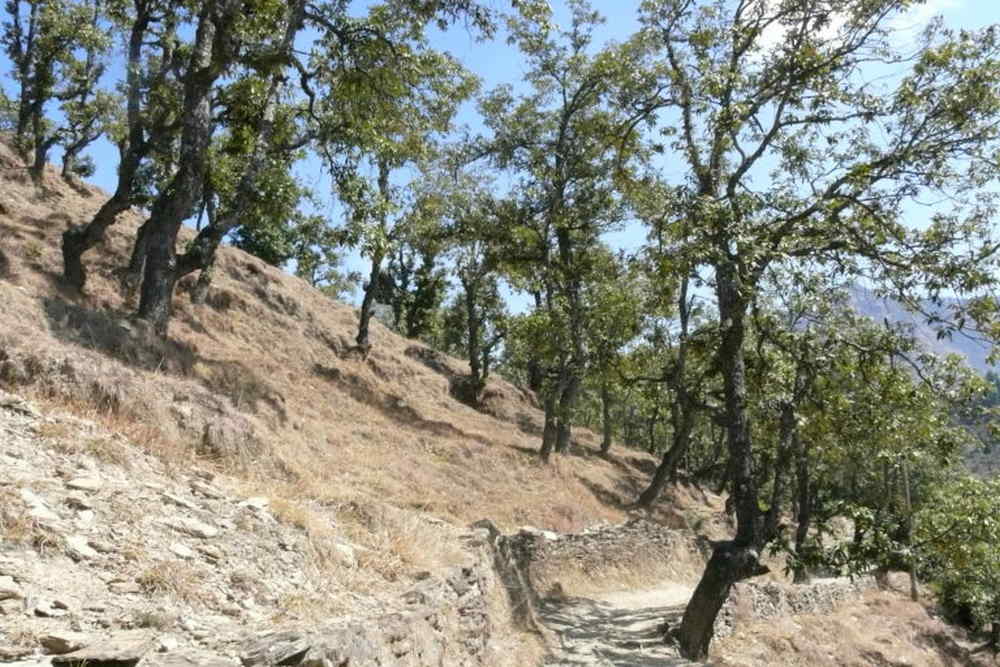 Van panchayat of Meora village. Extraction of non-timber forest produce opens up the forest canopy to sunlight, causing desiccation of the soil, and also affects the shrub and sapling layer, which is important for oak forest birds. Image credit: Ghazala Shahabuddin.

While such extraction has been going on for many years in community-managed forests, the effects on forests are cumulative and the “chronic effects of this extraction are seen only much later,” he explained.

Menon, Shahabuddin along with co-author Hari Sridhar sampled birds during two seasons (winter and spring-summer) at 74 sites with varying levels of extraction in the middle elevation (1700-2200 m) moist temperate forests of Uttarakhand. The forests straddle the Nainital and Almora districts of Kumaon and are dominated by ‘banj oak’ (Quercus leucotrichophora). They analysed multiple parameters as a function of vegetation structure: the number of bird species found (or species richness), the abundance of different species, community composition, and guild abundances based on habitat preferences and diet.

Their results showed that in the intensively-used oak forests, extractive activities such as lopping, leaf litter collection, and grazing had resulted in reduced complexity of the vegetation. Trees were shorter and smaller in girth, the canopy was more open and the understorey was less dense.

The bird community in the area consisted mostly of insect-eating (insectivorous) species, such as flycatchers, thrushes, woodpeckers and cuckoos. The species richness and abundance decreased due to the changes in vegetation structure, particularly canopy cover and density of the understorey vegetation. The species composition was affected more by both local and landscape-level factors. Insectivorous birds and oak forest specialists such as the maroon oriole, grey-winged blackbird, pied thrush and rufous-bellied niltava disappeared due to the drop in canopy cover and proportion of oak forests in the landscape.

Such adverse effects of long-term biomass extraction on insectivores and oak specialists may be intensified by the loss of contiguous oak forests in the landscape, said Shahabuddin.

By consuming insects, these birds help in controlling the population of pests. Without their services, outbreaks of pests could damage trees, causing economic losses. “Extraction of non-timber forest produce opens up the forest canopy to sunlight, causing desiccation of the soil, and also affects the shrub and sapling layer, which is important for oak forest birds. Only short trees with poor foliage and small girth remain after several years of continuous extraction,” said Shahabuddin.

Ramesh Krishnamurthy, a scientist at the Wildlife Institute of India, who was not connected with the study, said that he was not surprised by the results, because oak forests – and most broadleaved forests in the Himalayan region – are under exploitation and these forests also have a rich biodiversity.

“What will be important to know is, to what extent the exploitation of resources may be tolerant to birds; and what will be the offset for biodiversity and people if we are to take strong preventive mechanisms or allow people to continue the exploitation.”

These findings have policy implications for the way forests are managed in the middle Himalayan region. To mitigate adverse effects on birds, the authors call for maintaining sufficient old-growth banj oak stands in the neighbourhood of van panchayat (used) forests. Old-growth forests act as a “repository of biodiversity that are currently threatened by the expansion of roads, tourism, horticulture and urban settlements in the middle Himalayas.”

Specifically, the authors recommended that the Uttarakhand forest department expand the current protected area system in the 1500 to 2400m elevation zone through community reserves and wildlife sanctuaries.

Among such measures, extraction could be controlled or regulated in ways to preserve canopy cover, vertical stratification, and understory density, the researchers suggested. “For instance, forest stands can be harvested in rotational sequence so that harvested portions can regenerate over time,” stated Menon.

Although some community-managed forests already have such regulations, Menon points out, many of them are facing livelihood pressures which take precedence. “In such cases, it may be necessary to develop alternatives to the household and livelihood needs for plant products, especially firewood and fodder. For instance, we have seen that villages with better access to gas cylinders and electricity depend less on firewood. They don’t stop using firewood since it has cultural significance but the quantum of use decreases,” added Menon.

Both the forest department and van panchayats should work together to devise appropriate solutions that would consider both the interests of forest dwellers and also conservation of birds, emphasizes Menon.

“We are also trying to encourage local communities to capitalise on the increased bird tourism in Uttarakhand by setting up homestays or initiating bird-based tourism, thus creating alternative livelihoods and reducing dependence on forest products,” added Menon. “There are a few such initiatives in the state that we aim to emulate, where interested local participants were trained in the necessary bird identification skills, as well as language and people skills, and are now guiding groups of bird-watchers and photographers through their own backyards.”

Worry Side Up: Why the cost of eggs has doubled in the US